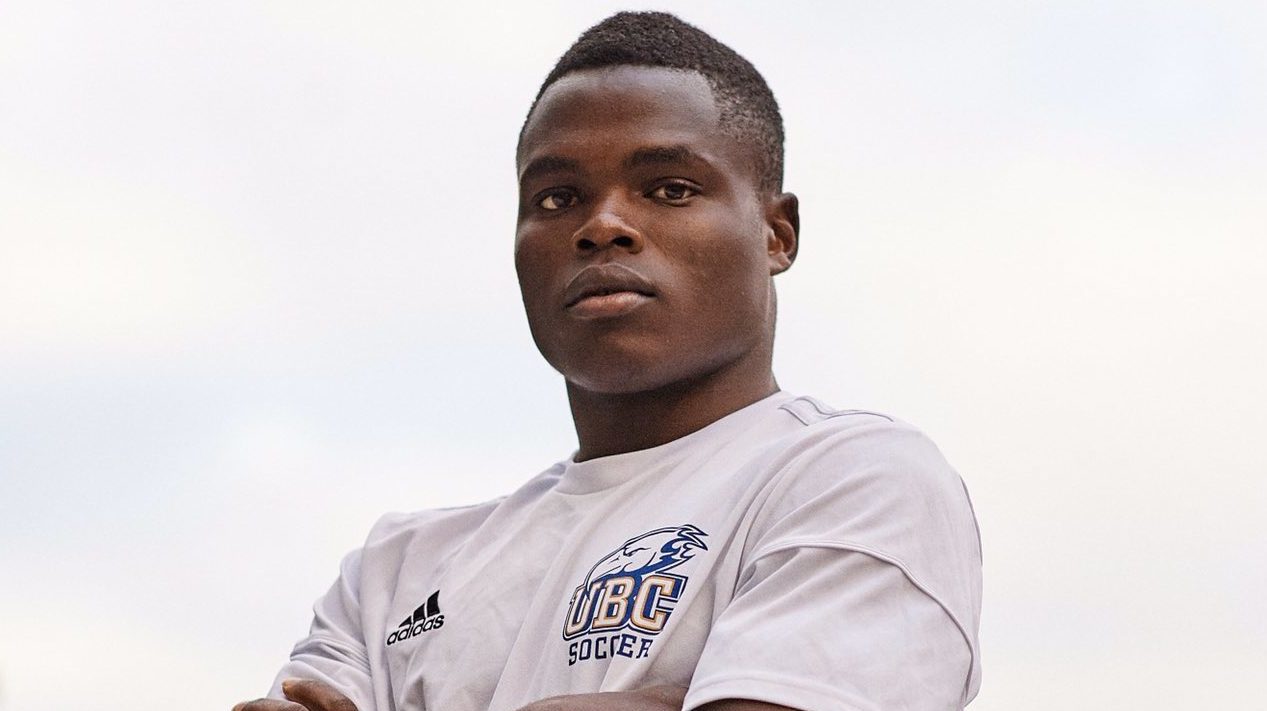 Over the past two years, over 200 players have suited up in the Canadian Premier League. Every single one of them has taken a unique pathway to Canada’s professional league.

Perhaps none of them has had a story quite like that of Victory Shumbusho, a recent CPL-U SPORTS Draft pick who will vie to earn a contract with Pacific FC during its training camp before the 2021 season.

The 23-year-old Shumbusho, most commonly known as a dominant striker from the University of British Columbia, recently spoke with CanPL.ca to detail just how long of a road it’s been to his current position, on the brink of the professional game.

“When I got picked I think I was overwhelmed with joy,” Shumbusho said of getting drafted. “Since the league was just starting I had my eyes on it.”

Although the prolific goalscorer has seemingly impressed everywhere he’s ever played, he’s nonetheless had to claw for every step he’s climbed up the ladder in the unforgiving world of soccer.

Shumbusho was born in the Democratic Republic of the Congo, and he explained that life was good there — until it wasn’t. When he was nine, civil war broke out in the country, and Shumbusho’s father — a politician and a well-respected preacher — was forced to flee with his family.

“My family lost all our possessions — the land, the house — and we migrated across the border on foot,” Shumbusho recalled. “We walked for hours to cross the border to Uganda, and we were refugees there.”

He was quick to add, though, that his family never did end up arriving in a refugee camp. Rather, they made a go of it on their own in Uganda, which Shumbusho pointed out was even more difficult at times, without the certainty of regular meals. The Shumbusho family spent five years in Uganda before a church in Chilliwack, B.C. sponsored their application to move to Canada.

That five-year stretch, though, would turn out to be quite important to young Victory: it was in Uganda that he first picked up soccer.

“In Congo the main sport there was karate, so I didn’t play soccer until I moved to Uganda,” he said. “When we reached there I realized, oh, if I want to play with other kids I’ve got to learn this sport quick.”

It seems he did indeed learn the sport quickly. The village where Shumbusho lived, Bwerenga, had nightly matches, where only the best players were allowed to participate. Within a year, Shumbusho (by then 11 years old) was playing every night.

“I remember the best player in the village, I used to fetch him water and wash his clothes, do chores for him so he could teach me one skill move every day,” Shumbusho recalled. “So I was spending hours and hours just doing work for him and he would teach me one move. That’s one thing that always stuck with me, I kind of laugh about it when I look back.”

Fast-forward a few years to Shumbusho’s arrival in Canada, and he was once again one of the best players of his age in the area. Not long after his family settled in B.C., he secured a tryout with local club Chilliwack FC’s under-15 side.

“I remember going to the tryouts I was so nervous, I was just thinking there’s no way I can be better than these players, they’ve been playing soccer since they were young,” Shumbusho said. “They have cleats, they have jerseys, they have a nice field, so there’s no chance I can compete with them.

The Whitecaps wanted Shumbusho to play in B.C.’s High Performance League, but the Shumbusho family — having arrived in Canada months before with nothing — couldn’t afford the $2,500 fee every four months that it would’ve cost. So, instead, he returned to Chilliwack FC for three years, and scored over 50 goals in each of the 20-odd-game seasons.

Such was Shumbusho’s obvious talent that, finally, HPL club Fraser Valley FC reached out to his mother, and offered to waive the fees for him. He went on to score 19 goals in 13 games, under the watchful eyes of UBC coach Mike Mosher. At age 17, Shumbusho trained with the Thunderbirds at their pre-season training camp (scoring four goals in an intra-squad match, of course), and Mosher, knowing the young Shumbusho wanted to pursue a pro opportunity, recommended him to the Whitecaps again.

At the Whitecaps academy, Shumbusho met Noah Verhoeven, Michael Baldisimo, and Alphonso Davies — the latter of whom became a close friend pretty quickly. He also met Pa-Modou Kah at that time; Shumbusho recalled staying back after training with Kah to learn, amongst other things, how to take penalties.

Ultimately, though, a groin injury knocked Shumbusho out for five months that year, putting one more roadblock in his path to a pro soccer career.

“Honestly, it’s the cruelty of playing at a high level: you want to stay as healthy as you can because as soon as you get injured, you get forgotten about a little bit,” Shumbusho said. “Since I was in my gap year, coach was like, ‘We really like you, but what do you want to do? Either you stay and try to get a contract, or you try to go to university and take that path.'”

After speaking to several universities, Shumbusho opted to commit to UBC, his decision made easier by his pre-existing relationship with Mosher.

The rest, it seems, was a straight path to the CPL-U SPORTS Draft. Shumbusho scored 26 goals in 50 games for UBC (and just under 0.75 goals per 90), making a brief USL League Two stop at the Victoria Highlanders in 2019.

Now, having been picked 12th overall by Pacific, Shumbusho is closer than ever to his dream of a career in soccer. He’s not there yet, of course — he still needs to earn himself a contract with the club — but as always, he’s full of confidence. He explained that he feels he can make an impact by sticking to his game.

“I think sometimes when players reach a level they try to become players that they’re not, they try to adapt to things that are not their style of play,” he said. “For me, if what I’ve been doing got me to this level, that means there are good things about my game this level sees and requires. One of my goals is just to stay true to myself. … (And) listen for advice, because I think that’s one of the biggest things a player can have. Take advice and apply to your philosophy, and mould it to become the best version of yourself.”

Shumbusho added that he knows Pacific already has serious depth up front; players such as Marco Bustos, Terran Campbell, Alejandro Díaz and Victor Blasco all contributed to one of the CPL’s most potent attacks last year. Still, he thinks his pace and proven finishing ability could bring a new dynamic to the team.

“For me my job is to come and prove, and show what I have,” Shumbusho said. “Every minute, every training session, every game, I’m growing, and as time goes on, I’m establishing myself.”

There’s still plenty of road left on Shumbusho’s path. Already, though, his journey to this point is remarkable.

Considering what he’s been through already, the sky is the limit for the 23-year-old goalscorer.