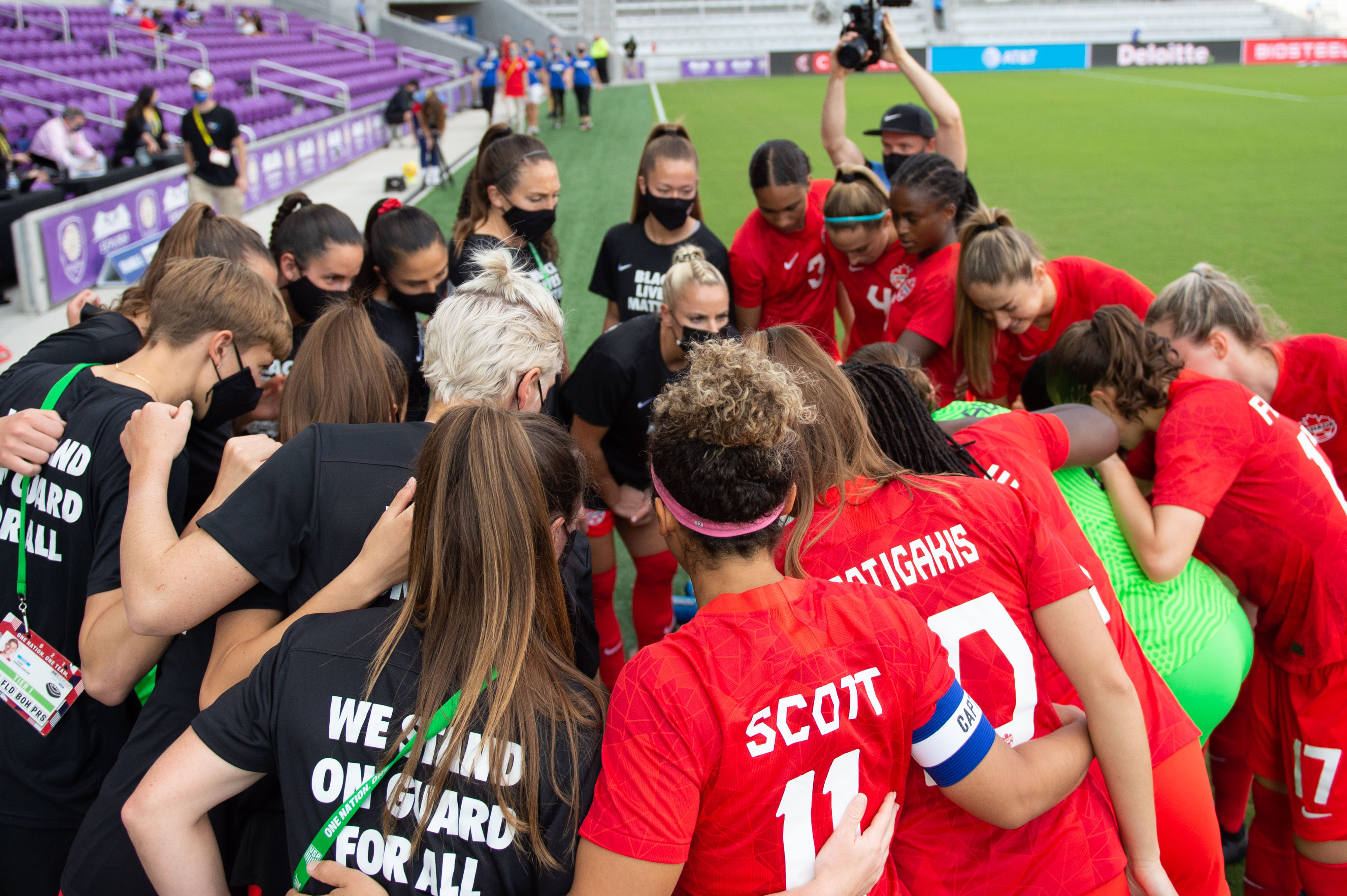 The Canadian women’s team quietly departed the 2021 SheBelieves Cup on Wednesday, falling short in a 2-0 loss to Brazil in Orlando.

Canada departs Orlando with a 1-2 record following a slim defeat to the United States and victory over Argentina.

The SheBelieves Cup was Canada’s first action of 2021 and the first games played in almost a year.

Here’s a player-by-player rating – on a scale from one to ten – for Canada’s SheBelieves Cup finale against Brazil.

Labbé was forced into a couple tricky situations against Brazil. A pair of saves on Debinha just before the halftime interval made up for the disappointing sharp-angle between-the-legs goal coughed up at the 14th-minute mark.

Brazil often found breakthroughs past Riviere who, depending on the sequence, had Adriana, Marta, and Debinha barreling down her wing at any given time. A missed headed clearance led to Brazil’s second goal.

A costly giveaway by Rose in the 12th minute led to Brazil’s first goal. To her credit, the 18-year-old recovered well, specifically in the second half, to finish out the game.

Third 90-minute performance in a row for the Spurs defender who shined in an underwhelming backline. Zadorsky was unlucky not to score in the second half when a sliding deflection went off the post… and a second attempt on her backside outside of the six-yard box was cleared away.

"Just that kinda day for #CanWNT" 😓

A tough assignment for Carle but she was effective enough as a grounded defensive left fullback in the first half and a more progressive overlapping option in the second. Would like to have back the pair of missed clearances that led to Brazil’s second goal.

Canada’s goalscorer vs. Argentina showed she deserved the start, holding her own alongside vets Fleming and Scott as an attack-minded midfielder before being brought off at halftime.

A solid performance for Scott who was again wearing the captain’s armband. Some impressive clearances and defensive work.

Another stellar performance for Canada’s midfield maestro who also put in a solid shift defensively. Line-breaking passes were aplenty – direct balls up to Nichelle Prince and shifty work in the attacking third being particular highlights.

Not the 21-year-old’s best game at the SheBelieves Cup. Quiet afternoon on Canada’s right-hand side.

Prince did well exploiting space in-behind Brazil’s backline and challenged the Brazilian ‘keeper often… but failed to create any clear-cut scoring chances and was brought off at halftime.

The Orlando Pride midfielder put her stamp on the midfield through her second-half stint. Good energy and amassed a solid series of passes.

The 25-year-old platooned at right fullback to good effect, surging forward along the touchline to connect with Beckie and further options up the right wing.

An excellent cameo for the Canada veteran who nearly scored on a cross from Beckie in the 69th minute. One of few chances for the team in the afternoon.