Tony Mikhael is headed to Beirut next week and then Bahrain not long after in what will be the next and biggest step in his soccer career.

And the story behind the story for the Valour FC draft pick – how a guy attending Carleton University in Ottawa was identified by the Lebanese under-23 national team coach — lends credence to the old saying that “luck is the residue of design.”

“”It’s crazy. It’s just crazy how this all happened,” Mikhael told CanPL.va. “I’ll just say it was a bit of luck. It’s not the usual way how this unfolded.”

An economics student at Carleton, Mikhael had his 2020 U SPORTS season wiped out due to the coronavirus. He kept working out while doing on-line courses and it was during this time that he was “identified” by new Lebanese U-23 coach Jamal Al Haj, who had been appointed last October.

It turns out Mikhael’s trainer in Ottawa, Antonios Assad, had trained Al Haj’s son during his days in Beirut. After the coaching announcement Assad reached out to Al Haj’s son.

Not long after Mikhael was suddenly on the Lebanese U-23 radar screen.

“When Antonios saw the announcement he sent a note to the coach’s son saying, ‘Hey, I heard your dad just got appointed head coach. I have a Lebanese guy here in Ottawa who is a good player and has a good video. Maybe you could show your dad to see what he thinks’,” Mikhael explained.

“He got back to us the next day and said he was impressed. From there I got invited to the first camp in November of 2020 where I did well and then just last week I got the call to come back.

“Again, it’s crazy how this all happened. My trainer took it upon himself to do this. He didn’t even tell me about it. Then one week he comes up and says, ‘Hey, listen… I have crazy news for you. I send your video to (Al Haj), they got back to me right away and they’re inviting you to a camp now.’

“It’s crazy how things can happen. I feel like it’s a greater plan.”

Mikhael will be in Beirut for a week starting on Monday and will then be off to Bahrain for friendlies. The squad was initially being put together to compete in the Asia Cup this month, but that event has been postponed until later this year.

Still, for a college player from Ottawa who was selected by Valour in the Canadian Premier League’s U SPORTS Draft in late January to be fast tracked like this, well, it’s a heckuva story. 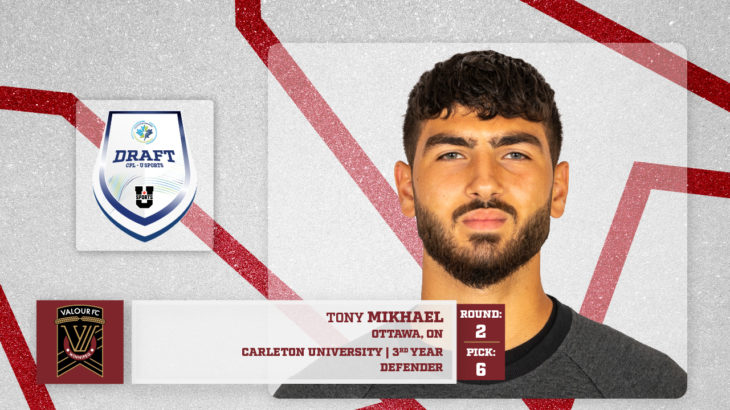 “If you look at Olympic-level football and international football in general, it’s a great indicator of players that compete in our league,” Valour FC coach Rob Gale said. “I’ve watched him through the provincial team programs. I watched him at the Canada Games when he was here and went back over my scouting notes from when he was working for the national team.

“There’s a lot to like about him and it’s reinforced when you get to know him as a person. We saw how much it meant to him and his family when he got drafted. He sent us a video of his family watching the draft and their reaction when his name came up. It was great. He’s a humble hard-working good kid who is being recognized at a national level coming out of college, which is amazing.”

Mikhael’s parents – father Camille and mother Helena – were both born in Lebanon and moved to Canada when they were young. Mikhael, born in Canada, has dual citizenship.

“This is 100 percent a moment of pride for me,” he said. “When I was at the first camp in November I wasn’t sure what to expect. When you go to these environments, if you do one thing well it’s ‘very good.’ But if you do one bad thing it looks extra bad. I really took care in every decision I was making. Thankfully, it couldn’t have gone better.

“I’m very, very blessed. It’s been a year, especially with COVID, of a lot of ups and downs. I know a lot of people are struggling. As a student… everything was on-line and our season was cancelled. Just so much was so tough on everyone.

“I tried to keep a positive mentality, stay mentally strong, keep my faith strong and a lot of really good things have happened to me this year and I’m just so grateful for it.”