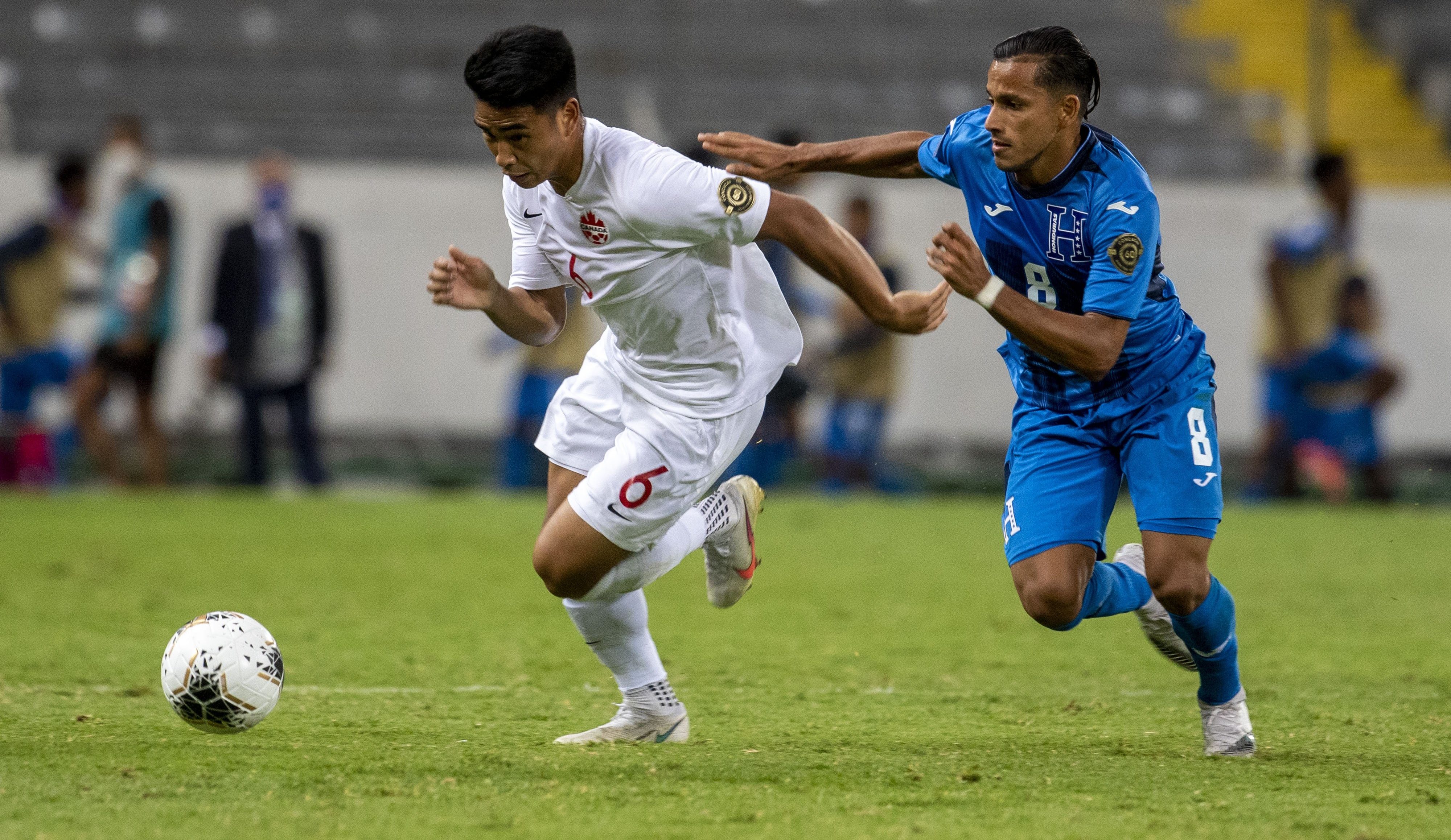 Canada’s hopes of travelling to Tokyo for this summer’s Olympics came to an end on Sunday.

A 2-0 loss to Mexico in the semifinals of the Concacaf qualifying tournament ensured that the Canadian under-23 team would have to watch the festivities in Japan from home.

Going to the Olympics was the target for Canada, but even though it failed to qualify, coach Mauro Biello felt there were a number of positives for his team at the Concacaf tournament in Mexico.

“The end in mind in this program to have an alignment from the men’s national team all the way down (to youth level). For me, it was to build a foundation with the group and graduate some of these players to move on to (senior level),” Biello said after the loss to Mexico..

Biello’s comments raise the obvious question: Who on Canada’s Olympic qualifying team deserves a look from coach John Herdman’s senior side based on their performance at the Concacaf tournament in Mexico?

RELATED READING: CanPL.ca Debate: Who flew under the radar for CanMNT in World Cup qualifiers?

James Pantemis had a stellar tournament in Mexico, making 20 saves in four games and bringing Canada through a few hairy moments – his second-half against Haiti comes to mind. The CF Montreal ‘keeper is the kind of pure shot-stopper Canada has produced in the past, but few have come to the rescue of a national team quite like he did this past week and a half.

Now – and I can hear your thoughts reading this – his distribution wasn’t exactly spectacular in Mexico. A second-half giveaway led to Canada’s first conceded goal in the semifinal, one of a handful of messy passes out of the back for him on the day and, if we’re being honest, in the tournament. A similar giveaway led to Honduras’ lone goal last week which, if it had stayed out, could’ve sent Canada to play a much weaker United States side in the semifinals. If you’re counting backward, and being cynical, Pantemis might have costed Canada the chance to go to the Olympics for the first time since 1984.

But, crucially, that’s not always what we’re looking for at these tournaments.

Like many players in this group, Pantemis was far from match fit – a seven-match run with Valour FC at the Island Games last summer was his most-recent stretch of meaningful minutes. He was also dealing with a backline he wasn’t familiar with and, with COVID-19 restrictions, had even less time to adapt. Distribution, specifically playing directly out of the back like Canada is oft to do, can be developed in players and its effectiveness is relative to the team. So, from an individual perspective, Pantemis had a solid tournament and is worth consideration again from John Herdman, who has called him up a handful of times in the past couple years.

David Norman Jr. was one of the unheralded heroes for Canada at this tournament. A midfielder by trade, he had to deputize as a centre-back when he replaced an injured Callum Montgomery in Canada’s opening game against El Salvador. He never looked back after that, starting in all three of Canada’s next games, and playing a big role in helping his team reach the semifinals.

Canadian coach Mauro Biello praised a number of players after the loss to Mexico, including praising Norman Jr. for having “a solid tournament.”

The Canadian senior team has plenty of options in midfield, but depth at the centre-back position isn’t one of its strengths. While Norman Jr. is still learning the position, he proved to be quick study at this tournament, and could be a solid contributor for Herdman’s back line if given the chance.

“I think I have the qualities to be a quality centre-back at this level. Obviously, there’s still a lot I need to learn positionally, both in and out of possession. But I’m happy with the games I played there and I want to push on from here,” Norman Jr. said.

A strange pick maybe, considering how deep the senior men’s team currently is at central midfield, but Baldisimo has more than earned a chance. He was fantastic in the middle of the park for Canada at the Olympic qualifying tournament, looking composed and confident with the ball.

Baldisimo has displayed an ability to spray passes and maintain possession at a level that’s quite uncommon for a player at the under-23 level. With his natural talent, now would probably be a good time to bring him into a senior camp to learn under the likes of Atiba Hutchinson, Samuel Piette, and Stephen Eustaquio.

The younger brother of Pacific FC’s midfield maestro Matthew Baldisimo, Michael has shown that he’s a very intelligent and consistent player for his age. His tenacity to win balls and keep possession by holding off opponents seemed infectious in midfield, spreading to teammates and elevating the intensity all around. Players such as Baldisimo are rare, and it would be in Canada’s best interest to foster his growth as much as possible, with some of the senior team’s best midfielders beginning to hit advanced ages.