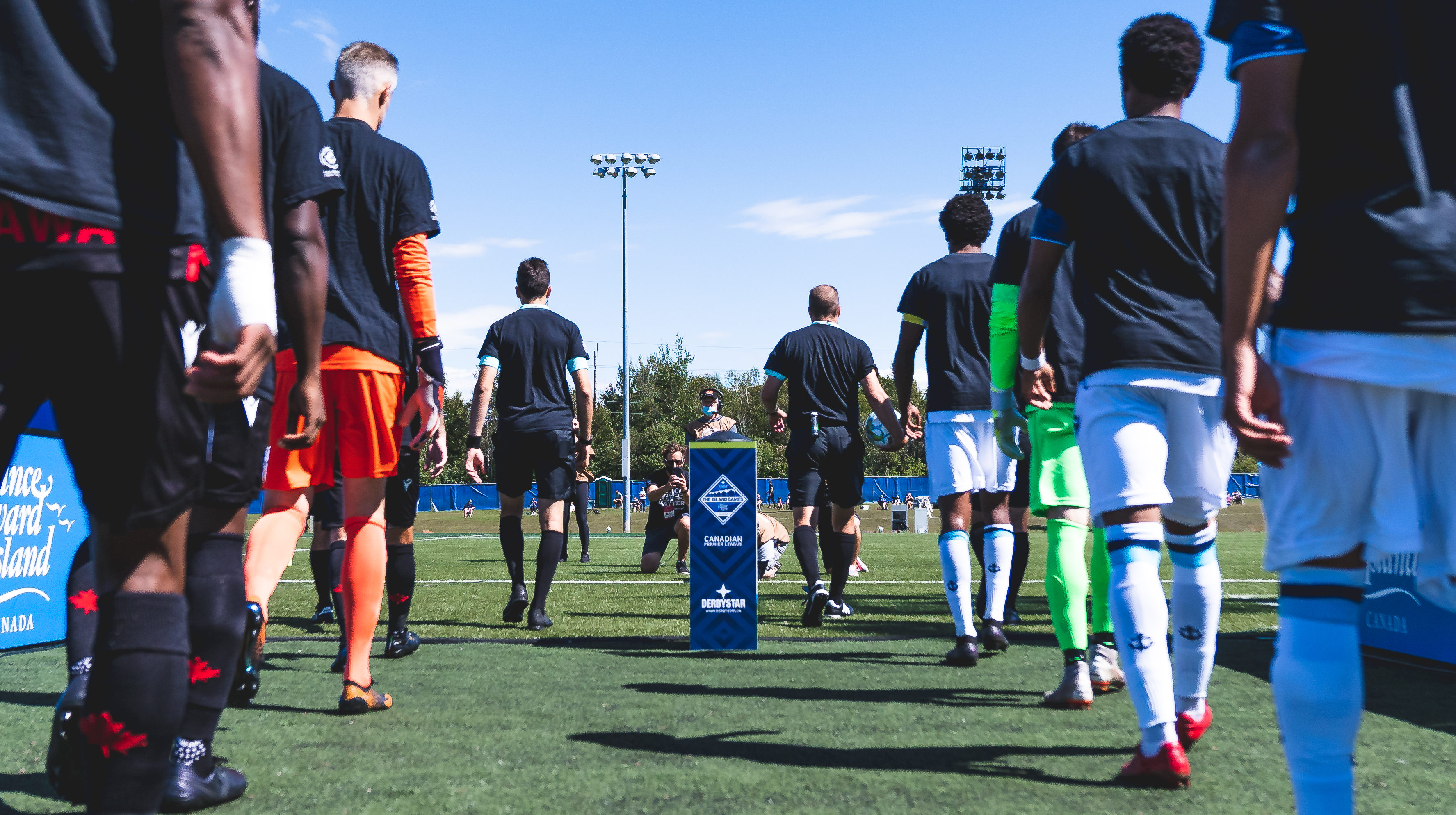 Atlético Ottawa and HFX Wanderers FC walk onto the pitch during the 2020 Island Games. (Photo: CPL/Chant Photography)
2021 CPL pre-season: What we know so far
2021-06-05
by
CanPL.ca Staff
The Kickoff

Ever since the 2020 Canadian Premier League season ended in September, fans have been eagerly awaiting news about the league’s third year.

The CPL is set to make an announcement on the 2021 season Saturday night at 7:30pm ET/4:30pm PT live on OneSoccer and before the Canadian men’s national team’s 2022 World Cup qualifying tilt with Aruba. Commissioner David Clanachan said in his most recent statement, on May 14, that the league is aiming to kick off the 2021 campaign at a single site with all eight clubs in mid-June or early July, as part of a full 28-game season.

All eight CPL sides have been putting their rosters together, with a few signings yet to come to fill out the 23-man squads. Stay tuned to CanPL.ca’s 2021 roster tracker as the teams fill out their groups.

Here’s everything we know so far about the 2021 CPL season going into Saturday’s announcement.

It’s probably best to begin with the obvious: the League is adamant that the 2021 campaign will happen, in some shape or form. Commissioner David Clanachan, in a letter to supporters on April 28, assured fans that various scenarios for returning to play are on the table.

The League did previously announce it was targeting a start date around the Victoria Day long weekend in May, but with a third wave of the COVID-19 pandemic still underway, the Commissioner explained that it’s more prudent to delay things slightly.

Clanachan said in the latest statement: “We are committed to playing our 3rd season of CPL soccer in 2021. You can count on us delivering a creative and innovative solution for our Players, Partners and Supporters as we did with the Island Games in 2020. Clearly, the country is struggling through a third wave of the pandemic and we need to adjust accordingly.”

Season to kick off at single site

Commissioner Clanachan has revealed that several options are on the table for the CPL to open its season at a single location – similar to the Island Games in PEI, but with clubs hoping to return to home markets for as much of the season as possible.

The league has committed to a 28-game schedule, but due to COVID-19 it’s most prudent to play some of that schedule at one site to begin the season before clubs are safe to return to their home cities.

The beginning of the 2021 season may not be too far away; the Commissioner’s statement on May 14 also revealed that the league is hoping to kick off as soon as possible, with a start date as early as mid-June in their sights.

It’s yet to be determined when exactly that might be, or how long CPL sides will remain in the single-location setup.

One of the league’s top priorities for the 2021 campaign is an eventual return to local club markets and stadiums, as well as – most importantly – the return of fans to those venues. Clanachan made that clear in his statement:

“We will follow a single table format that will provide fans with a more competitive season that creates more exciting matches right to the end of the season – including matches in our home markets potentially with our Supporters and Fans cheering on their Clubs.”

So far, five CPL clubs – HFX Wanderers, FC Edmonton, Cavalry FC, Pacific FC, and Valour FC – have made some formal return to training in their home markets, having received approval from local governments and health authorities to do so safely. Restrictions and safety protocols are different in each location, but all CPL teams are ensuring strict adherence.

Atlético Ottawa, meanwhile, is also in training, having traveled to Spain for their pre-season camp at the facilities of parent club Atlético Madrid.