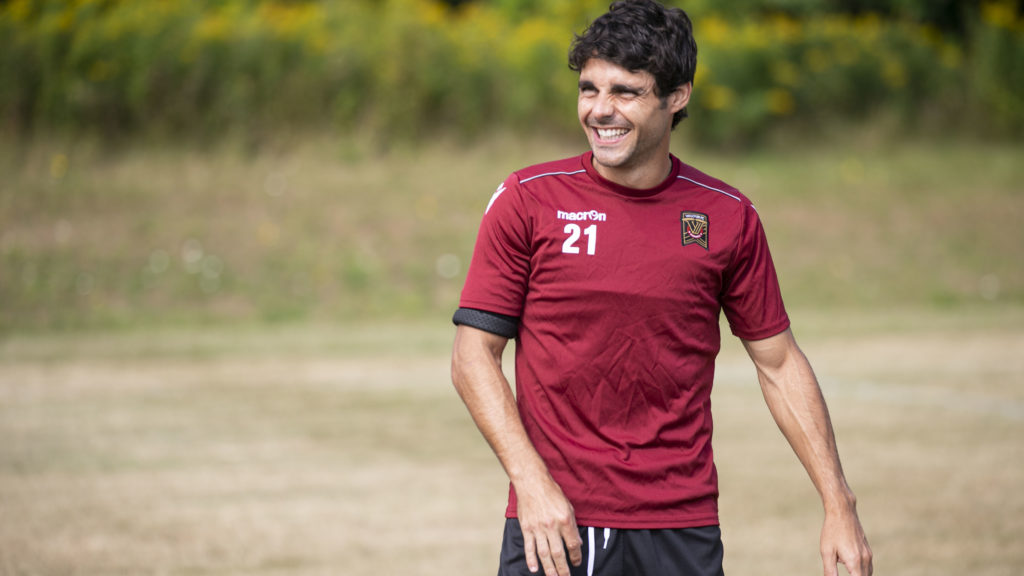 Valour FC announced the re-signing of Spanish midfielder José Galán this week, bringing the fan favourite back to Winnipeg for a third Canadian Premier League season.

He is, along with Federico Peña and Raphael Ohin, one of three players who will have played in all three seasons in Valour history, and over the past two seasons has established himself as both a favourite of The Trench

and an integral member of the squad.

Here are some of the most memorable moments from his time in Winnipeg thus far.

3) Continuing his globetrotting career by landing in the CPL

When Galán made his Valour FC debut in July 2019, Canada became the 13th country that the midfielder has played in. Galán previously played in Spain, Thailand, Indonesia, Austria, Jordan, Cyprus, Romania, Finland, Andorra, Hong Kong, Qatar and Saudi Arabia since making his senior debut for Atlético Madrid C in 2005.

By signing for a third season in Winnipeg, Valour is already one of the clubs he’s spent the longest time with, and he seems to be loving his time in the city. His daughter (more on her later) was born in the city, and Galán has talked about his admiration for the fans and the city on a regular basis.

He has also done a bit of coaching in Manitoba, which could be a hint as to how (and maybe where?) he wants to stay involved in the sport when his playing career is over, whenever that day eventually comes.

RELATED READING: Valour FC’s José Galán eyes return to fans in 17th pro season: ‘I must play for them and give back’

Galán joined Valour FC between the Spring and Fall seasons in 2019 and was announced as a signing on July 15th, 2019.

Valour was in the middle of a dry spell at that time, winless in six matches in all competitions. After Galán joined, their form picked up a little bit, drawing three of their next five matches, including a 1-1 result against Cavalry FC, thanks to a 93rd-minute penalty from Marco Bustos.

On August 10th, that winless streak finally came to an end. With Galán playing all 90 minutes, Valour beat York9 (as York United were then known) 2-0, with goals from Michele Paolucci and current York attacker Michael Petrasso. It was their first win since a 1-0 win over FC Edmonton on June 2nd, and a much-needed morale booster.

Galán ended up playing 13 games down the stretch, and his leadership was important for Valour in the second half of that season and into 2020, as the side started to pick up a few more positive results.

1) His first CPL goal, and the celebration that followed

The most memorable moment from his time in the CPL thus far came at the Island Games. After scoring his first CPL goal, a cross-goal shot that found the top corner against Atlético Ottawa, Galán followed it up with an emotional celebration.

He sucked his thumb and pretended to rock a baby, while his teammates crowded around him, all seeing just how much it meant to him.

Galán’s celebration was a reference to his daughter Celia, born in Winnipeg only a few months earlier, who was with his wife Paloma back in Manitoba. He told CanPL.ca that he cried after scoring it: “Right when I scored I felt like my daughter gave me the power to score that goal because of the circumstances,” he said at the time.

The goal was impressive and helped Valour to their biggest-ever win, but the celebration is likely what fans, and the Galán family, will remember for years to come.