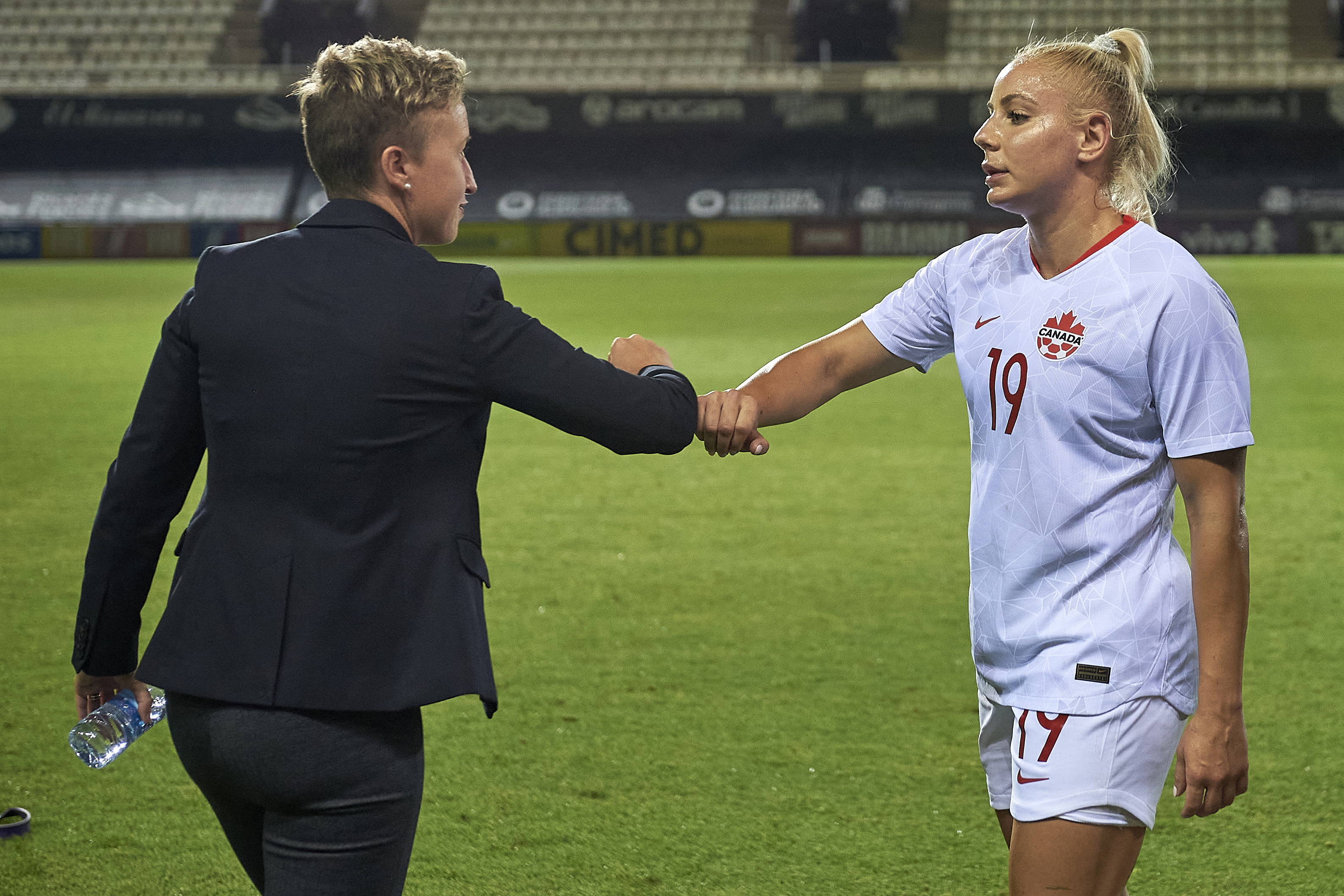 After qualifying a year and a half ago, and a year-long delay as a result of the COVID-19 pandemic, it’s finally time for the Canadian women’s national team to take the pitch at the Tokyo 2020 Olympics. Canada are back-to-back bronze medalists after strong showings at London 2012 and Rio 2016, and — as Bev Priestman has put it — “We need to change the colour of the medal”.

With Canada’s Olympic soccer tournament set to kick off next Wednesday, on July 21, let’s take a look at how they got here, who will be pulling on the Maple Leaf, and more.

Canada have played eight matches in 2021, and have shown flashes of brilliance against some of the world’s top international teams.

Their 2021 schedule began in February with an invitation to the SheBelieves Cup in Orlando, Florida. After hanging in for most of their first match against the United States, a late Rose Lavelle goal saw the world champions take all three points and a 1-0 win.

It was a similar story in their second game against Argentina, as neither team could find a breakthrough until a moment of magic from Sarah Stratigakis. In second-half stoppage time, a free kick came into the box and bounced around a bit before falling in front of the Argentine goalkeeper. Stratigakis lunged in and forced the ball into the back of the net for her first international goal, and Canada took their second game 1-0.

Canada’s third and final match at the SheBelieves Cup was against Brazil. First half goals from Debinha and Julia Bianchi were all Brazil needed to secure the three points, and the match would end 2-0. Canada ended the tournament in third place, behind the two sides that beat them, with the Americans winning with a perfect three wins from three.

After no games in March, Canada were back in April, playing away games against England and Wales. They won the first match in Cardiff 3-0 thanks to a trio of wonderful goals from Deanne Rose, Évelyne Viens and Jessie Fleming. Fleming’s was the pick of the bunch, a curling shot from the edge of the box that found the top corner.

A few days later in England, a third-minute goal from Viens and an 86th minute goal from Nichelle Prince saw Canada win 2-0, both thanks to mix-ups from the England defence. Canada’s defenders put up big performances in both of their matches in the UK, with Vanessa Gilles in particular standing out, and possibly winning herself an early spot on the plane to Tokyo.

Players from (mostly) England and Wales will make up the Team GB team Canada will face in Tokyo, with a pair of Scottish players also in the GB squad.

Canada most recently played a pair of friendlies in June, setting up camp in Cartegena, Spain and taking on Brazil and the Czech Republic. Both matches were fairly uneventful 0-0 draws in Bev Priestman’s final chance to take a look at her players before deciding her Olympic squad.

Canada also played a training game in Japan on July 14, taking on Netherlands. The match, played behind-closed-doors, finished 3-3, with Janine Beckie scoring a brace for Canada and Nichelle Prince adding the other.

One more week until #CANWNT first match at #Tokyo2020! pic.twitter.com/eTVnarLKBu

How Canada qualified for Tokyo

Canada qualified for the Olympics way back in February 2020 at the Concacaf Women’s Olympic Qualifying Championship. Canada crushed Saint Kitts and Nevis 11-0 and Jamaica 9-0 before beating Mexico 2-0 to finish top of Group B and advance to the knockout stage. With the two finalists qualifying for Tokyo 2020, Canada had to beat Costa Rica in the semifinal to book their ticket, and they did with a 1-0 victory thanks to a second-half goal from Jordyn Huitema. Canada would go on to lose the final of that tournament 3-0 to the United States, but did what they had to do in making the final.

Huitema won the tournament’s Golden Boot with seven goals across the five matches, with five of those goals coming against Jamaica alone. Janine Beckie also scored a hat trick in the Jamaica game, while Christine Sinclair and Adriana Leon scored three and four goals each against Saint Kitts and Nevis, respectively.

Canada heading to their fourth Olympics

Tokyo 2020 will be Canada’s fourth Olympic Games, and the first under new head coach Bev Priestman.

Following the aforementioned good start to 2021, Canada will be hoping to reach the podium for their third-consecutive medal, after winning bronze in 2012 and 2016, but they also played at the Games four years earlier.

Women’s Football has been an official Olympic sport since the 1996 Olympics, although Canada didn’t qualify for the first time until 2008. Coached by longtime national team boss Even Pellerud, Canada beat Argentina, drew with China, and lost to Sweden in the group stage. They advanced to the second round, but lost to the eventual gold medalists — their North American rivals from the United States.

Remarkably, there are still several Canadians from that 2008 tournament that are in Tokyo for this year’s event 13 years later.

Christine Sinclair, Sophie Schmidt and Erin McLeod were all on the roster, while Stephanie Labbé was among the alternates. Melissa Tancredi, now an assistant under Bev Priestman, also played on that team.

Future Canada women’s (and current men’s) head coach John Herdman was at those games with New Zealand, but the two sides didn’t meet. Herdman took over the Canada job in 2011, where he’d lead the team into London 2012.

London 2012 is where the women’s national team program really started to take shape under Herdman.

Canada were again good enough in the group stage to advance to the second round. Canada started their tournament with a loss to Japan (who they’re also in a group with this year), before comfortably beating South Africa and drawing with Sweden. Melissa Tancredi and Christine Sinclair led the way for Canada, scoring four and two goals, respectively in the opening round.

Sinclair and Jonelle Filigno scored in a 2-0 win over the hosts Great Britain in the quarterfinals, setting up a rematch with the United States. Always an exciting fixture, the semifinal didn’t disappoint, and was filled with goals and drama.

Sinclair scored in the first half to send Canada into halftime up a goal, but Megan Rapinoe equalized quickly after the break. After Sinclair scored a second, Rapinoe again replied in the 70th minute, setting up a nervy final 20 minutes. In the 73rd, Sinclair completed her hat trick with a tournament-leading sixth goal, and Canada were back in front.

A few minutes passed, and it seemed as though Canada was inching toward a spot in the final against Japan at Wembley, but then in the 78th minute, the referee blew the whistle. An indirect free kick inside the penalty area was awarded after Canadian goalkeeper Erin McLeod was penalized for holding onto the ball for more than six seconds. It’s a violation that is rarely called by referees — the goalkeeper usually gets a warning at least — but McLeod was controversially called for it. From the ensuing indirect free kick, Canada was called for a handball in the box, and a penalty was awarded.

Abby Wambach stepped up and converted the penalty, and the game went to extra time, where an Alex Morgan goal sent the United States to the final, and a heartbroken Canada to the bronze-medal match against France.

After 90 scoreless minutes of the match a few days later, a moment of magic earned the Canadian women’s national team their first Olympic medal. In stoppage time, desperate to find a winner, the ball fell into the box to Diana Matheson, who fired it home to win the match. She wheeled away in celebration with her arms up, and kissing the badge on her shirt in what has become an iconic Canadian Olympic moment.

Heading to Brazil with high expectations after the success of four year prior, and a year after hosting the 2015 Women’s World Cup, Canada were placed into Group F with Germany, Australia and Zimbabwe. It was a tough draw, but Canada came out on top, winning all three of their matches.

Janine Beckie and Christine Sinclair scored in a 2-0 win over Australia to start the tournament, while both would score again in their next match as well — two for Beckie and one for Sinclair in a 3-1 win over Zimbabwe. Melissa Tancredi scored twice in their third match, a 2-1 win over Germany to make it a perfect start to Canada’s tournament.

In the quarterfinals, Canada played France, the team they beat in the bronze-medal match four years earlier, and picked up the same result — a 1-0 win — with Sophie Schmidt scoring the game’s lone goal and setting up a rematch with Germany. This time, however, the Germans took the match 2-0 thanks to a penalty converted by Melanie Behringer and a strike from Sara Däbritz to double their lead. Germany would go on to win the gold medal, beating Sweden 2-1.

Canada again took part in the bronze-medal match, and again won it — this time against the hosts Brazil. Then-17-year-old Deanne Rose scored the opening goal, with Christine Sinclair adding a second just after halftime. Beatriz brought Brazil back into the game in the 79th minute, but it was too little, too late, and Canada were back on the podium for the second time.

There are six first-time Olympians to round out the rest of the squad — Julia Grosso, Jayde Riviere, Adriana Leon, Évelyne Viens, Vanessa Gilles and Jordyn Huitema.

Bev Priestman is Canada’s new head coach as of October 2020, and has had a pretty positive start to her first international head coaching gig. Of the seven matches she’s been in charge of, Canada have won three, drawn two, and lost two — showing a real defensive prowess and beating a trio of good teams.

She previously served as an assistant coach under John Herdman with the women’s national team, including at the 2015 Women’s World Cup and the 2016 Olympics. She coached the Canadian U17 and U20 national teams as well between 2013 and 2018, where she worked with many members of the current first team.

She then spent a few years as Phil Neville’s assistant with the English women’s team, before returning to Canada last year to take the top job.

Who are Canada up against?

Canada have been drawn up against Japan, Great Britain and Chile in Group E.

Canada most recently played Japan in October 2019, losing 4-0 in a not-so-Friendly match, and are 4-3-7 against Japan all-time. They’ve only played Chile once, a 1-0 defeat in 2013, and their only match against Great Britain was the aforementioned win against them at the London 2012 games.

Great Britain only fields teams in Olympic events, and is made up of players from the England, Scotland, Wales and Northern Ireland national teams. They have only competed at one Olympics (2012), and will be making a second appearance in Tokyo. Of the 22 players Great Britain is bringing to Tokyo, 19 are English, two are Scottish and one is Welsh.

Canada beat both England and Wales earlier in 2021, and will be hoping to do the same against the combined team when they meet each other on July 27.

Canada will play two matches before then — a match with Japan on July 21 and a contest with Chile on July 24.

Where are matches being shown?

Matches will be shown on CBC, and streamed online on CBC’s platforms. For a complete CBC broadcast schedule with soccer, and other Olympic events, click here.