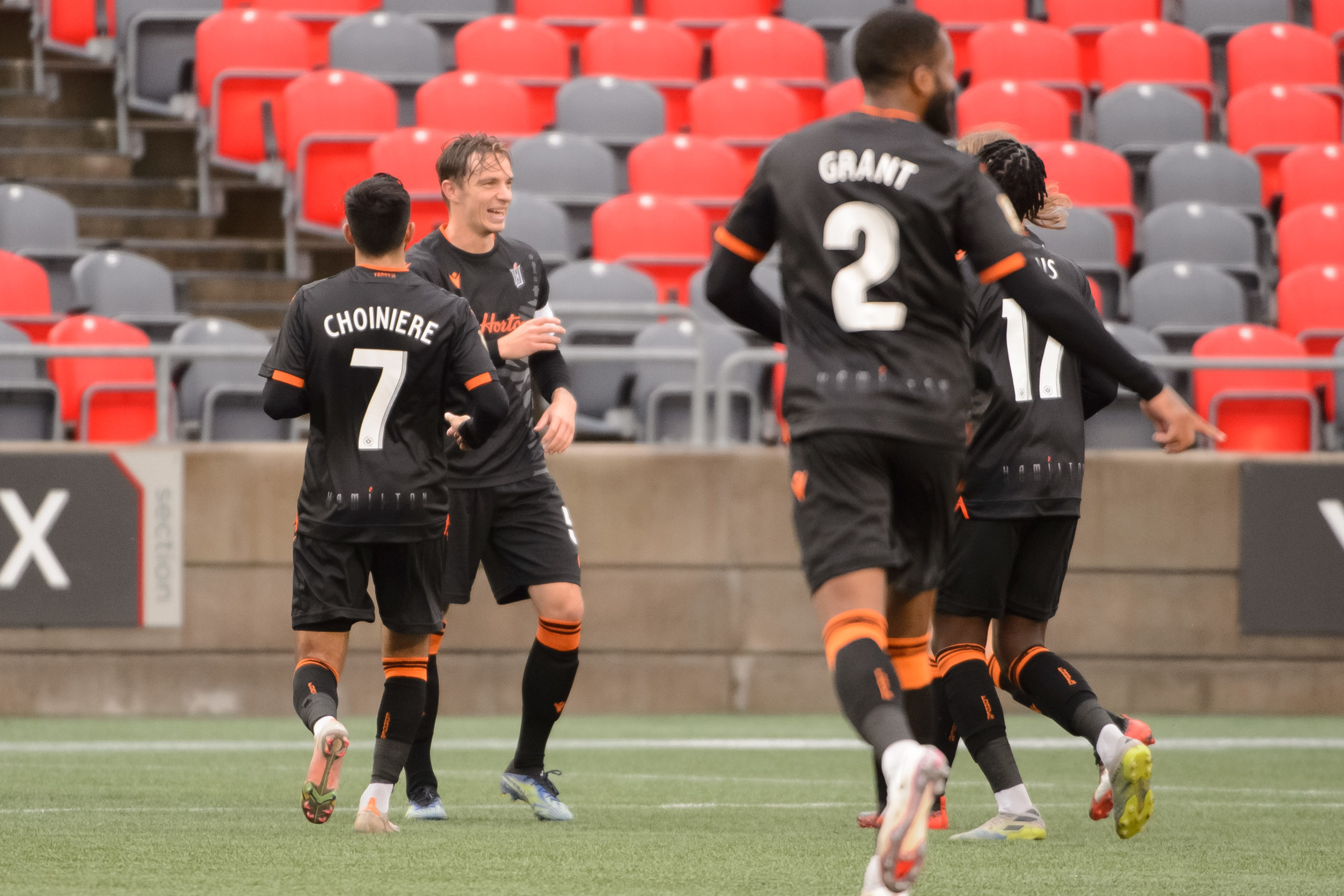 Forge FC moved one step closer to the top two spots in the CPL standings on Sunday, beating Atlético Ottawa 3-0 at TD Place. David Choinière opened the scoring for Forge just seven minutes in, twisting and turning to open up space for himself, and shooting the ball across goal to beat Dylon Powley. Daniel Krutzen redirected home a corner just after halftime, and Woobens Pacius added a third late for the visitors, while the defence did the rest in what would end up being a  fairly comfortable victory on the road.

With the win, they move one point back of second-place Cavalry FC, and have a game in hand, as they look to earn themselves a home playoff game.

From the first minute of Sunday’s contest, Forge FC played an energetic, high press that forced a lot of errors out of Atlético Ottawa. Forge made ten interceptions in total, four of them from Alexander Achinioti-Jönsson, along with seven tackles, as they put pressure on them from start to finish.

The pressure was also causing simple mistakes, like errant passes out of bounds, and mistakes which would end up leading to goals. For example, just after the six-minute mark, Drew Beckie was put under pressure and he passed the ball out of bounds. On the ensuing throw in, Forge FC charged up the pitch and David Choinière made it 1-0.

“They’re an organized team,” said Atlético Ottawa midfielder Chris Mannella after the match. “Bobby and the entire coaching staff has them well-drilled. They pressed us from the front, and to be honest I don’t think we dealt with it that badly.

“We actually played through them quite a bit of times. At the end of the day we lose 3-0, but in terms of the press I thought we managed them pretty decently, and actually created some chances from their high press and playing through it. I thought we actually did alright with that.”

In terms of their formation, Forge seemed to start with a back four, and transition at times to a back three, with left back Kwame Awuah moving centrally into a holding midfield role alongside Alexander Achinioti-Jönsson at times. Forge looked to get more bodies forward as they changed up their formation — as Awuah drifted into midfield, Paolo Sabak and Tristan Borges were able to push further up the pitch, and give the Forge wingers more space to roam out wide.

It was an effective strategy, especially in the first half, as Forge were sharp defensively, and created the majority of the chances going forward.

“Right now it is important, we have a couple of injuries at the back so we need to save a little bit of legs here,” said Forge FC assistant coach Kyt Selaidopoulos after the match. “Having that flexibility to be able to move Kwame into the middle helps us a lot.”

While they did run into the aforementioned strong Forge defence, Atletico Ottawa’s attack didn’t do themselves any favours on Sunday. They found themselves offside six times in this match, as The Hammers played a high defensive line that Ottawa’s attackers struggled to stay in front of.

The home side had a trio of chances around the 70 minute mark, including a header from Alberto Soto that forced a diving save out of Triston Henry, but over the course of the match as a whole, didn’t trouble the Forge goalkeeper very often.

Brian Wright finally put the ball in the back of the net for the home side in the 75th minute, with a brilliant redirection to beat Henry, but it was called back because the striker was offside. The Forge backline took a step forward, and Wright didn’t go with them, so when Ryan Telfer hit the ball to him, he was in an offside position.

“I don’t know if it’s concentration,” said Ottawa head coach Mista after the match. “The reality is they started the game better than us. You have a team like Forge who are the champion, and they are more concentrated than you, and you [concede] a goal in the first part.

“The problem is not losing, it’s the feeling because we never had the feeling we could score goals and be better than Forge today. Today is hard for us because we are not like a team, we play like individual guys, and this is not the way for us.”

Omar Browne making an immediate impact for his new club

It took a long time for Omar Browne to join Forge FC, but since he’s arrived he’s transitioned well into the squad. Browne finally arrived in Hamilton at the end of September, despite initially being signed on loan in June, as visa issues prevented the Panamanian attacker from joining his new side.

In two CPL appearances off the bench since joining the side, he’s picked up a goal and an assist, and also played half an hour off the bench in Concacaf League action.

Ten minutes into his Forge debut against Pacific last week, Browne scored the winning goal as Forge picked up three valuable points against one of the teams they’re chasing, and on Sunday Browne turned provider. He won the ball from Ottawa midfielder Antoine Coupland before turning and playing the ball between the defenders for Woobens Pacius, who did the rest and shot the ball into the bottom right corner.

Browne has the potential to cause even more damage once he’s fully fit, and as he gets more minutes under his belt, he may start to play an even bigger role in the already-impressive Forge attack.

“He brings a lot of offence,” said Selaidopoulos after the match. “Since he’s been here, he’s been doing very well. He’s getting minutes, he’ll get more minutes as we move on, and he’s a good addition to our team.

Wearing the captain’s armband on Sunday, the Forge FC defender was a pivotal part of his side’s strong defensive effort, and scored their second goal of the match.

Atlético Ottawa head across Ontario to play York United in their next match, on Friday, October 8 (7:30 pm ET). Forge head further east, to take on HFX Wanderers at Wanderers Grounds on Wednesday, October 6 (7 pm AT/ 6 pm ET). Watch all matches live on OneSoccer.