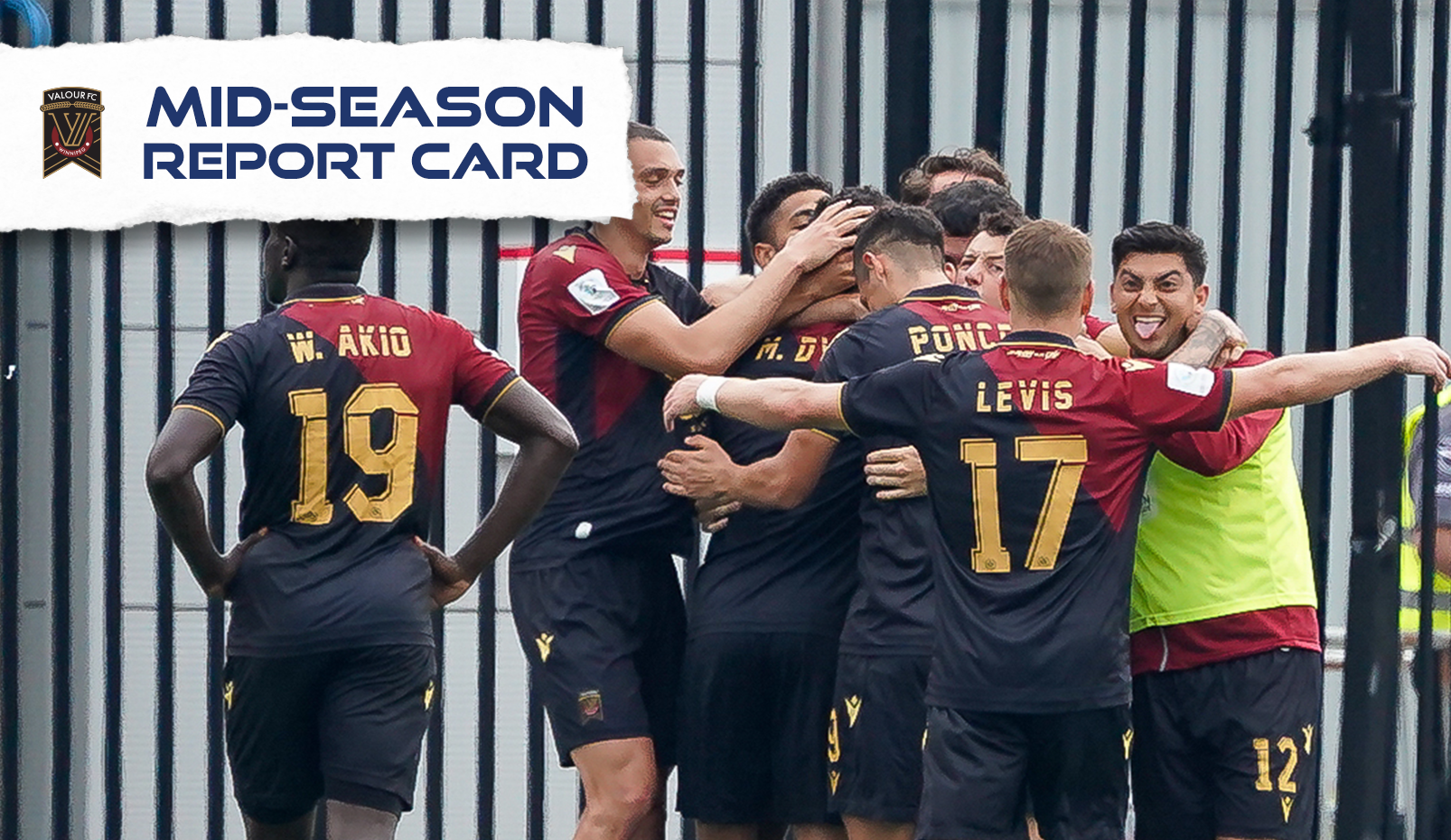 Two report cards will be released per day over the course of this week. Up next: Valour FC.

Alexandre Gangué-Ruzic: Going viral on global social media aside, it’s been a decent start to the year for Valour, who despite some tough injuries, remain in a good spot heading into the midway point of the campaign, fully in the thick of the playoff race. Plus, they’ve gotten there in fun fashion, too, scoring the third-most goals in the league. Yet, that’s indicative of Valour’s strengths – when William Akio, Moses Dyer, Alessandro Riggi and Sean Rea get going… It’s been fun to watch. The only problem? That hasn’t been often enough (it’s worth noting Valour’s goal total is inflated by a 6-1 drubbing of Ottawa), which wouldn’t be all doom-and-gloom, if the defence wasn’t dealing with the same issue. At the same time, that isn’t too much of a cause for worry. When they’ve had both Andrew-Jean Baptiste and Jonathan Sirois in the lineup, they’ve been nearly unbeatable, and have been managing Baptiste’s minutes as a result of that. So overall, the pieces are coming together nicely for Phil Dos Santos’s side.

Benedict Rhodes: Consistently inconsistent is probably the best way to describe Valour’s season thus far, and their entire history in the Canadian Premier League to some extent. They’re a team that has the potential to win 6-1 on the road against a top team like Atlético Ottawa, but sometimes goals are hard to come by, or defensive errors see them drop points. They have some very good players, but as a team they’re sometimes missing one piece of the puzzle.

Charlie O’Connor-Clarke: Valour’s stock has surged upward in the past few weeks, with the current three-game winning streak they’re riding. Beating both York and Forge away, before pulling out a late win at home against Halifax, has put them just a point out of the playoffs after a mediocre start to the year. These recent results just about make up for the woeful home form previously — just five points from a possible 15 at IG Field, in a league where points away from home are at a premium. At their best, Valour’s front four can be lethal in transition, as was the case in their stunning 6-1 win at Atlético Ottawa. In games where they can’t create those direct breaks, though, teams have neutralized them. The return of defensive stalwart Andrew Jean-Baptiste has made a huge difference the past few games in solidifying a backline that was shaky at times.

Kristian Jack: After winning two of their first one matches – one convincingly, one fortunately – Valour FC have looked a completely different side in the last few weeks, ending the first half with their first three-game winning run for a year. The return of the inspirational defender Andrew Jean-Baptiste has allowed them to be more settled defensively and continue to hit teams quickly in transition, making them a difficult proposition for any team in the league.

Mitchell Tierney: It has been a streaky season for the Winnipeg outfit. They lost just one of their first five matches, which included the now-infamous 6-1 win over Atlético Ottawa on the road, but then did not pick up a win in their next five after that. But after wins in the last three they are right on the playoff bubble, and have already shown marked improvement from last year. Most notably, they have already picked up just as many points on the road as they did all of last season. They also boast one of the league’s most lethal attacks, led by Player of the Year candidate Sean Rea.

Alexandre Gangué-Ruzic: For Valour, finding some consistency is going to be the big goal for them in this second half. When they’re at their best offensively, they’ve been fun to watch, and when they’ve been at their best defensively, they’ve been unbeatable. The problem is that hasn’t always been the case, be it due to form, injuries or other factors. If they can put it all together, though… they could most definitely be in the running for a playoff spot, if not more, allowing them to fully atone for last year’s second half collapse.

Benedict Rhodes: Valour are one of the leading teams in the chasing pack behind the playoff teams, and with a lot of home games remaining, could certainly be on the playoff bubble come the end of the year. They’re only a few points back of the top four, so if they win the games that a playoff-bound team should, they might just sneak in.

Charlie O’Connor-Clarke: A brief run of results is one thing, but it’s now up to Valour to prove they can do it more frequently if they want to make the playoffs for the first time in club history. They have some extended stretches at home still on the calendar before they end the year with a three-game road trip, so it’s vital they get the job done in Winnipeg. Reinforcements from the transfer window will surely help; Kévin Rendón might add the quality and creativity that they’ve needed in midfield, Daniel Ascanio has already made an impact as a new-look attacking option, and Nassim Mekideche will help share the load at the back in a centre-back position where Valour have lacked depth at times. The talent is there, especially up front, for this team to challenge for the playoffs.

Kristian Jack: The key for Valour’s success is turning a side that can occasionally look disjointed – as a resolute defence and central midfield not connecting with a dangerous front four – into the team that, when clicking, can be a side that can win a lot of big games in the second half of the season. Their next four matches are against teams in the playoff spots and that will be a crucial stretch to see if they can avoid losing such positive momentum that they are currently on.

Mitchell Tierney: Andrew Jean-Baptiste’s return has been a massive difference-maker for Valour, who have conceded just once in their last three matches. The club recently added 22-year-old defender Nassim Mekideche to add backline depth as well. There is further room for improvement from within as loanee Daniel Ascanio looked very good in his debut, while Walter Ponce is starting to find his footing as well.