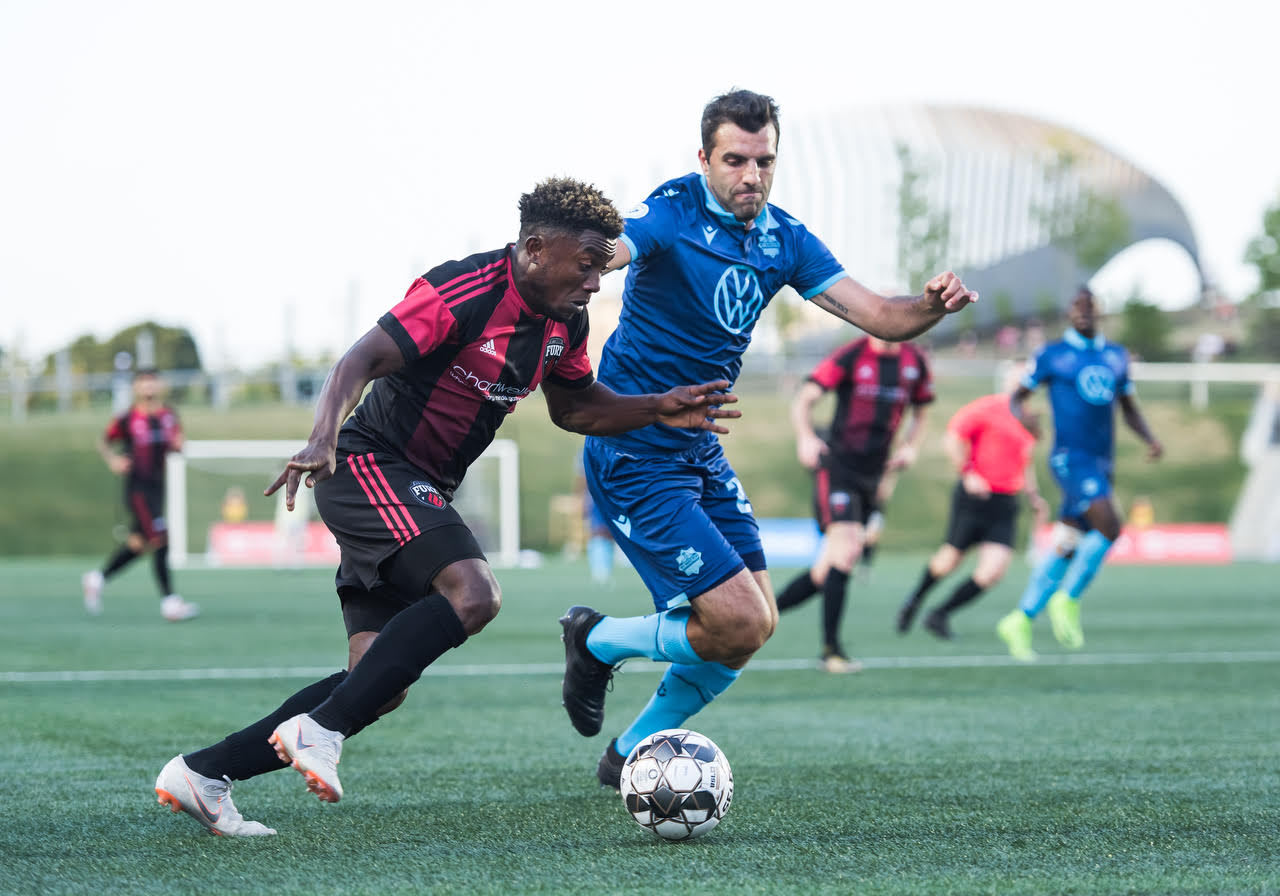 HFX Wanderers FC needed to score two goals against Ottawa Fury FC and not concede to move through to the Canadian Championship semi-final.

But a goal late in the first-half was a crucial blow to the Wanderers as the Fury advanced 5-4 on aggregate.

“We came in here with a little bit of a mountain to climb,” Wanderers coach Stephen Hart told CanPL.ca after the game.

“We got into the situation we actually wanted to be in by going 2-0 up and gave up a goal at a crucial time which I think rattled us a little bit,” Hart said, adding he was proud of his side’s effort across both legs.

The two goals came from strikers Tomasz Skublak and Luis Alberto Perea at the 30th and 43rd minutes. It was the first time both forwards were in a starting XI as both forwards have battled injuries all year.

Ottawa’s dagger of a goal came from Onua Obasi in the first minute of injury time off a set play, putting the Wanderers back in a must-score situation.

“I think we lost a bit of concentration there. We are always aware of players coming in front of us and we paid the price for it,” Hart said.

Despite a message of calmness at half and a reminder that the Wanderers were still in it, Hart’s side couldn’t mount yet another comeback as the Fury made adjustments and took control of the match. A goal from Christiano Francois at the 66th minute tied the game 2-2 but gave the Fury more breathing room.

For the Wanderers — a new team in a new league, with many players competing professionally for the first time — fighting back in a knockout competition was a new hurdle.

“Maybe that experience was missing, to calm things down, keep the ball out of their feet a little bit and buy yourselves a bit of rest, a bit of time and then save it for the final push,” said Hart. “Those things cannot be coached, they have to learn by experience and today will go a long way.”

The first leg showed the CPL side could go toe-to-toe with a USL team and the second leg backed up that observation.

A busy stretch with nine games in the month of July — including a five game road-trip that sees the East Coast team bounce across the country multiple times — leaves Hart wondering what could have happened if the team was in a situation with more rest.

“We knew at some point the team would begin to die and we would need to sort of freshen the attackers and see what would happen. But unfortunately we gifted them the second goal and it’s been our achilles heal really.”

There was no shortage of entertainment or drama in a tie that featured nine goals.

Costly giveaways in the second leg and controversial goals or non-goals in the first leg gave leave lots of “what if” moments for the Wanderers.

As Hart sees it, the 5-4 scoreline was an accurate reflection of this showdown.

“We had some chances, they had their chances. The game was, in both legs, fairly evenly balanced,” Hart said. “Today, we were 2-0 up and should have managed the game better, it just wasn’t to be.”