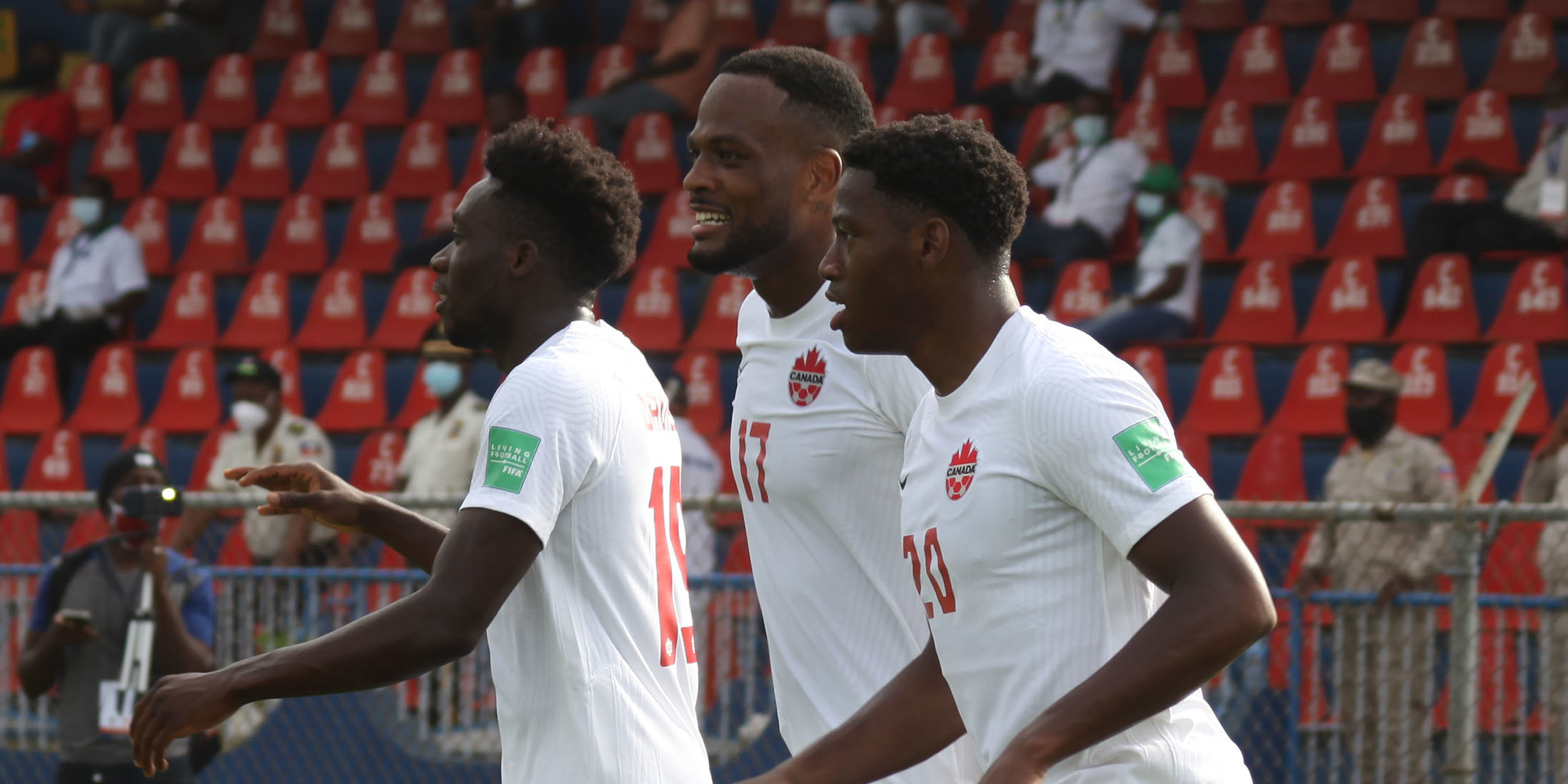 The Canadian men’s national team leads at halftime of its two-legged World Cup Qualifying tie with Haiti, after eking out a 1-0 win on Saturday in Port-au-Prince.

It wasn’t necessarily pretty, but heading into leg two with an advantage and a clean sheet is about as much as Canada could reasonably have hoped for from a difficult contest in tough conditions down in the Haitian capital. Cyle Larin’s first-half goal was all John Herdman’s side needed to come out on top.

Now, Canada will move swiftly onward to the second leg of this tie — their “home” leg, on Tuesday night in Chicago, Illinois.

But first: here are, as always, three post-match thoughts from Canada’s hard-fought win in Haiti.

Kaye’s inclusion in the starting 11 over Samuel Piette was one of just two changes Herdman made to his side from the last game against Suriname, and it worked out quite well for Canada.

The Los Angeles FC midfielder brought a more creative element to the middle of the park for Canada, and he worked exceptionally well in a trio with Jonathan Osorio and Stephen Eustaquio. Kaye finished with an 85.4 per cent pass success rating, and he was important to helping break the Haitian lines.

It was Kaye’s exceptional vision that led to his through ball to Osorio to help set up Larin’s goal:

With Kaye beside him, Eustaquio also played with greater freedom, and he had one of his best games in a Canada shirt. He had a staggering 90 per cent pass success rating, and covered plenty of ground.

Herdman definitely has two very different styles of midfielder at his disposal in Kaye and Piette, both of whom can be deployed tactically depending on the situation.

Canada not afraid of physicality

Referee John Pitti set a tone early in this one by handing a third-minute yellow card to Haiti’s Carnejy Antoine. That caution could have taken some of the bite out of the Haitian defending, but they didn’t seem concerned by it.

Haiti was keen to play Canada’s stars tightly, throwing in crunching tackles to try and win the ball back. It worked reasonably well — they ended up winning 25 tackles to Canada’s 11, although they committed 16 fouls in the process. The Canadians weren’t quite as daunted by it as their opponent may have hoped, though; Alphonso Davies in particular seemed to embrace the physical contest, happy to take contact while on the ball.

Davies’ side of the pitch was heavily overloaded, meaning he wasn’t quite able to attack as much as he could against Suriname, but he still did well to compete with Haiti’s defenders for 50-50 balls. He took a few nasty hits and will certainly be sore in the morning, but to his credit he went all 90 minutes.

The Haitians’ approach to the game was probably about what Canada would have expected, with heavy pressure and unforgiving tackles, but it seems Herdman’s side was well prepared for that style of match.

This game was certainly the busiest Milan Borjan has been for Canada in a while, with two massive saves and at least a handful of crucial punches and catches. The veteran Red Star Belgrade ‘keeper was a true leader at the back, confidently delivering orders to his defenders in front of him and keeping them organized.

Borjan made one phenomenal save in particular, diving to tip an attempted bicycle kick over the net just seconds after Jonathan David’s breakaway chance at the other end in a fairly nervy part of the game.

The defending across the board was solid from Canada too, for the most part; Scott Kennedy, in his second-ever game for the national team, was excellent again, both in his last-ditch tackling and mobile ball movement. Steven Vitoria was a solid calming presence as well, starting in lieu of Doneil Henry as Canada’s most experienced defender on the pitch.

Still, there’s no denying Borjan had to settle things down a few times; his ability to leap on a loose ball or claim a cross out of the air isn’t something Canada has had to rely on in recent World Cup Qualifying games, but it’s very good to see that he’s fully capable of bailing out the defence if necessary.