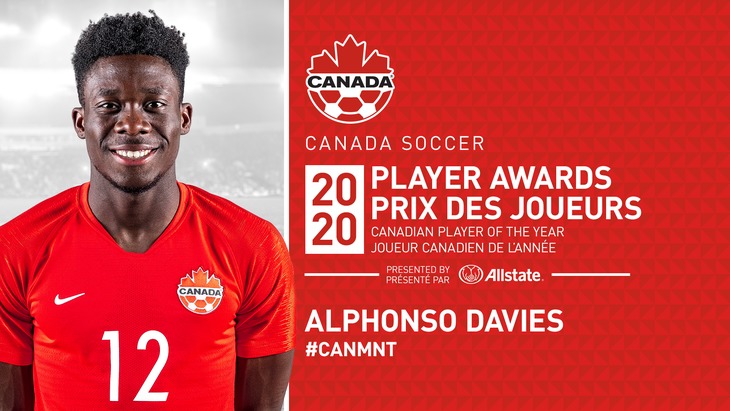 It’s the second time that Davies, 20, has won the award — the Edmonton native was 18 when he claimed the honour in 2018.

“I’m very grateful to win this award. Hard work always pays off. Thanks to everyone for supporting me,” Davies posted on Twitter.

More accolades could be in Davies’ future, as he’s one of the leading candidates to take home the Lou Marsh Trophy, which is awarded annually to Canada’s top athlete, professional or amateur. Davies would become just the second soccer player to win Lou Marsh Trophy, after Christine Sinclair claimed the award in 2012 following the London Olympics. The 2020 Lou Marsh winner will be announced next week.

With the Canadian men’s team largely inactive during 2020, it was Davies’ outstanding form at club level for Bayern Munich that sealed this second Canadian men’s player of the year nod.

Canada only played three times this year (all of them friendlies held in January) due to the COVID-19 pandemic, and Davies didn’t feature in any of those games. His last appearance for the Reds came in November 2019, in a 4-1 loss to the United States in the Concacaf Nations League. In total, Davies has 17 caps since making his debut for Canada in 2017, scoring five goals and adding seven assists.

At club level, Davies played a major role in Bayern Munich’s success during the 2019-20 season, helping the Bavarian giants win the treble — the Bundesliga, the DFB-Pokal (German Cup) and the UEFA Champions League — and establishing himself as a regular starter and one of the game’s best left fullbacks. He scored three goals in 43 appearances across all competitions, and became the first Canadian men’s international to win a Champions League crown.

Among his highlight-reel moments last season was a fabulous run he made against Chelsea in the round of 16 in the UEFA Champions League, which finished with him delivering a pinpoint cross for teammate Robert Lewandowski to tap home.

There was a similar moment in the quarter-finals against FC Barcelona, when he made another surging run with the ball glued to his feet before setting up Joshua Kimmich with an easy goal.

Davies’ efforts for Bayern didn’t go unrecognized, as he finished third in voting for the Golden Boy honour, an annual award recognizing the top under-21 players playing in Europe. He was also named the 2019-20 Bundesliga Rookie of the Season and was shortlisted as a nominee for the UEFA Team of the Year.

“To see what Alphonso Davies has accomplished this year is awe inspiring for the next generation of players,” Canadian men’s coach John Herdman said in a media release. “His achievements have raised the flag in our sport higher than anyone else in our lifetime on the men’s side of the game and he has helped put this country as a football country on the world map.

“Alphonso has to be commended for his passion and spirit with which he plays, but also for his ability to connect with people off the field. He is a real ambassador for our sport in Canada and on the global stage.”

The Canadian men’s player of the year award was first handed out in 1993, with the inaugural award going to Alex Bunbury. Other winners over the years have included Jim Brennan, Dwayne De Rosario, Paul Stalteri, Jason de Vos, Craig Forrest, Atiba Hutchinson and Julian de Guzman.

Earlier this week, Tajon Buchanan and Jade Rose won the Canadian youth international players of the year honours. Canada Soccer will announce the women’s player of the year winner on Friday.