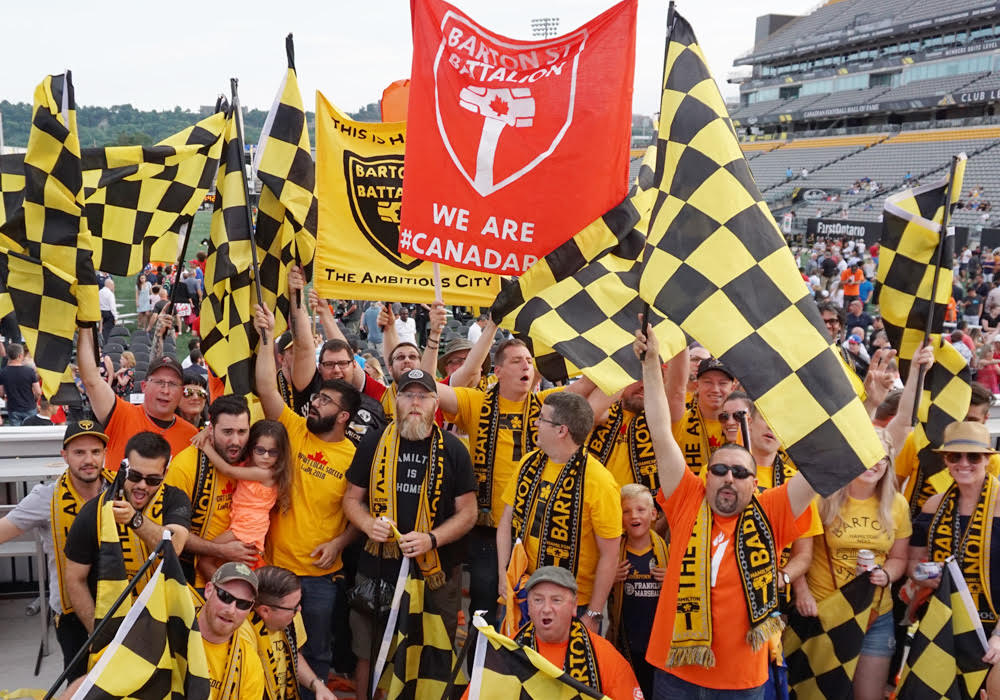 Some groups have grown steadily; others have caught fire.

Here’s an update on the CPL’s passionate fan groups.

Forge FC’s collective has gone from “three people in a pub” to 350-strong in three years, according to member Allan Gorman.

“Our group has exploded,” Gorman told CanPL.ca, adding the group expects to sell out its sizeable section at Tim Hortons Field ahead Opening Day.

“We’ve had an incredible year, but everyone’s still counting down the days to April.”

Part of that incredible year was a 150-member representation at the club launch last July.

“The launch was an exciting moment,” Gorman added. “There were about 150 of us behind the stage with flags and banners, it was quite the spectacle.”

With new members flooding in, Gorman says his group will be looking to expand its reach in the new year, starting with a massive soccer pub quiz.

Generation IX has been busy painting York Region in green and black.

The group has been hand-in-hand with York9, even showing their skills as a supporters section at an exclusive business event late last year when they were introduced in front of hundreds of prospected Founding Members in Vaughan, Ont.

Also, they are looking for talented musicians ahead of opening kickoff. Check ’em out.

Calgary’s Foot Soldiers SG have been hard at work on an Al Classico derby prize.

“It’s probably about two feet tall, so it’s fairly large,” Clarke told CanPL.ca. “I think it will be fairly impressive, considering we are crowdfunding the money for it.”

In terms of membership, Clarke believes his group is up about 25% compared to last season.

In Halifax, James Covey of Privateers 1882 says the group is on the verge of selling out its section ahead of HFX Wanderers first home match.

“Our two sections are 50% sold out, which means there will be potentially 500 of us Privateers (in the stands),” Covey told CanPL.ca.

The group is hoping to set up a proper membership role in the new year to better solidify their numbers, which are expected to be among the highest in the CPL.

“We’re getting ourselves formalized as a group by putting a structure in place.”

Lake Side Buoys of Vancouver Island are seeing a steady increase in memberships thanks to interest across Canada’s western front.

The group has nearly doubled in size from 2017, according to Ted Godwin, one of its founding members.

“We’re seeing lots of interest from throughout the island and former islanders who live in Vancouver and beyond,” Godwin said.

“There are also a good chunk of folks in Vancouver that are excited to come over on a regular basis. They want to be involved in this league, so that’s great to see.”

River Valley Vanguard is looking for a fresh wave of FC Edmonton supporters.

“We’ll be looking to the post-secondary crowd,” RVV leader Nathan Terlesky said, adding they will be looking to support the University of Alberta and other college teams before the season begins.

Terlesky says they’re approaching 100 members, most of who were a part of the #YEG4CPL campaign and the group that supported FCE during their time in the NASL.

Meantime, RVV could be the first CPL supporters club to have a second “chapter”.

The group has several members based in Britsh Columbia — FC Edmonton supporters who moved away.

“They’ve made a Cascadia River Valley Vanguard group of sorts.”

In Manitoba, Red River Rising is growing alongside Valour FC’s lineup, culminating with their annual general meeting in January.

“We have been building slowly ever since Valour FC was announced in June,” group leader Adam Johnston said. “The group has been consistently growing since then.”

Red River Rising will be planning special events in the new year to complement their ongoing pub nights.

“What we’re looking for is an exciting and engaging experience for supporters and others in the area in the stadium.”

There are a few other supporters groups across Canada. Keep an eye out: