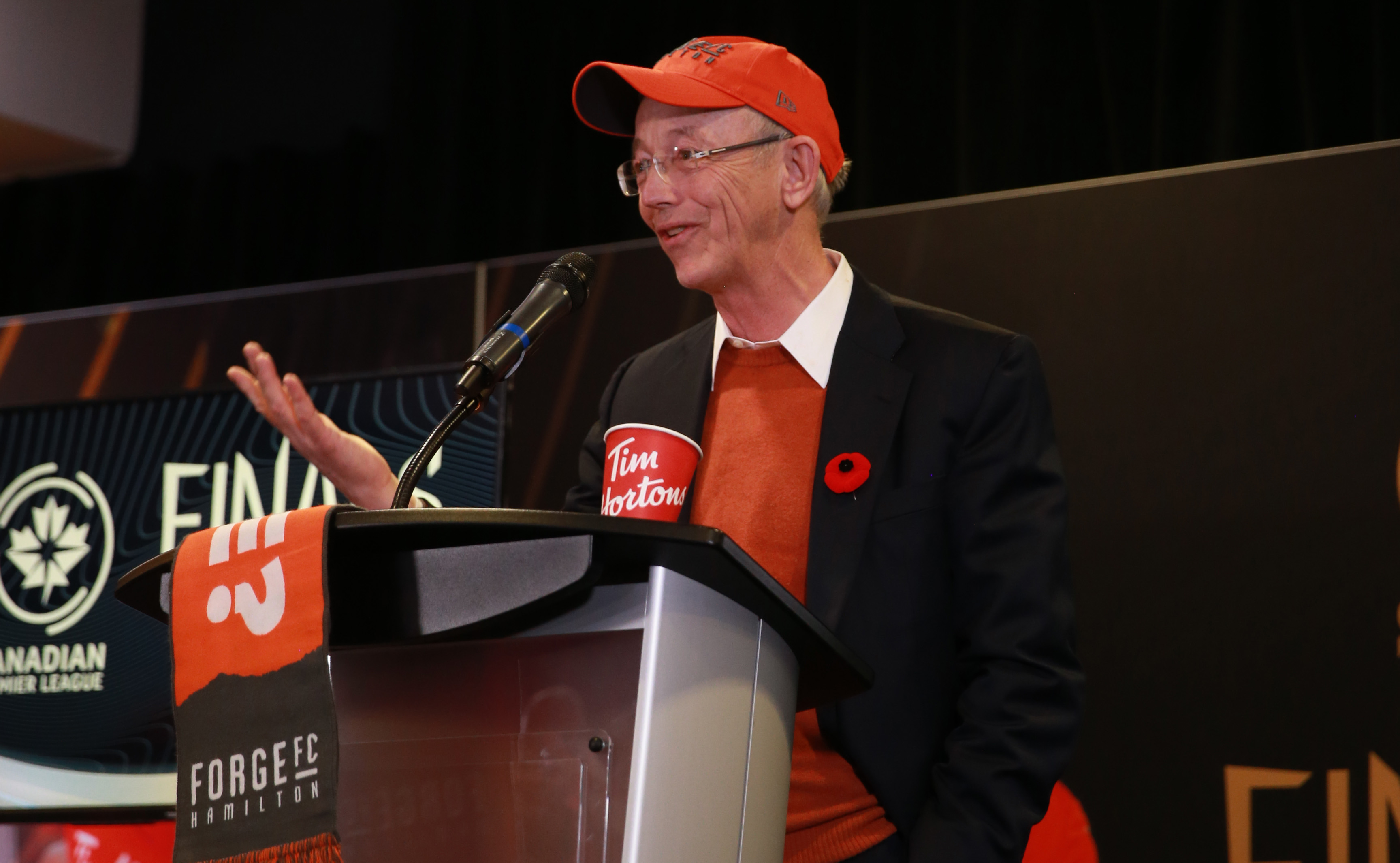 HAMILTON – “To a man with a hammer, every problem looks like a nail.”

Those are the words of Bob Young, a proud business man from Hamilton, Ont. and the self-professed “biggest fan” of Forge FC, the team he founded alongside the birth of the Canadian Premier League. In the build-up to Leg 1 of Finals 2019, Young was visibly giddy, flashing his trademark smile wide as he fielded questions from reporters, stressing, all the while, that the success of his Forge side belongs to those he brought on in his pursuit of a soccer economy in Canada.

But, what to make of those words above, unattributed in origin, yet shared gleefully by the man?  ”I’m actually a very bad manager,” Young began, puzzling reporters in attendance, before weaving a big-picture tale fitting for the message. “I don’t really care about this year; I only ever care about five years from now – where could we be, not where we are.”

He credits Bobby and Costa Smyrniotis for the team’s successes in 2019, as such. And, when it comes to the execution of his shared vision, Young is quick to credit the work of others like Canadian Soccer Business CEO Scott Mitchell and CPL marketing head Roy Nasrallah, too.

But, whether or not he’ll admit it himself, and regardless of his repeated affirmation that he’s just a business man behind the scenes, Young is a visionary, all the same.

His is a dream of the Canadian soccer of tomorrow, not necessarily affected by the fanfare of today’s occasion. That’s not to say the 59-year-old Canadian tech icon isn’t giddy with excitement for the two matches to come between Forge FC and Cavalry FC; he gleefully revelled in the entertainment value of the matchup, pointing out that “the fact that the two teams are clearly the two best teams in the league, and are very evenly matched, means by definition they won’t like each other.”

But for Young, there’s a bigger picture in mind. He takes a long-term view of things. And, in that respect, Finals 2019 still represents the overarching first step toward the ultimate goal – winning the FIFA World Cup.

“When we started off, we were having these negotiations with the Canadian soccer association and Victor Montagliani, who was still the chairman at the time, our goal was to improve Canada’s partnerships,” Young explained. “If we could help the Canadian Soccer Association build their business and also build the economy of soccer in this country, we could help Canada move from 110th in the world to something competitive – pick a number, 30, 40, 50th – so that we would have a reasonable chance for qualifying for the World Cup every four years.

“That’s where we were when we started,” he continued. “So, now with a little bit of success, when people say ‘What’s your goal, do you want to be 40th best in the world?’ To hell with that – we’re trying to win the World Cup now!

“Of course, that’s a long-term project, because the kids who could help us win the World Cup are certainly not playing professionally; they’re probably in Grade 8. They need to learn a passion for the game, the instincts of how to play soccer, and they need coaches who can help them develop. That’s our contribution to the economy of soccer in this country.”

Tangibly, though, Young sees plenty of progress from year one of the CPL. He points to deals and partnerships with MEDIAPRO, Volkswagen, and Macron as major accomplishments for the league, and highlighted the quality of the soccer across the board as defying the expectations he and his soccer-loving friends and colleagues had at the top of the season.

And, of course, he’s seen growth in the market, too.

“If you add all the soccer players and all the fees and all the jersey sales together, even with the MLS guys, it was an industry that would have been worth $500 million 12 months ago,” Young said. “It’s easily worth a billion dollars today. What will it be worth? In order for Canada to win regularly, we need a soccer economy the size of Spain or France or England, and there’s no reason we can’t get there.”

To a man with a hammer, every problem looks like a nail. But for the man at the top of Forge FC, those problems aren’t problems at all; they’re opportunities to find new solutions, and grow the beautiful game across Canada.