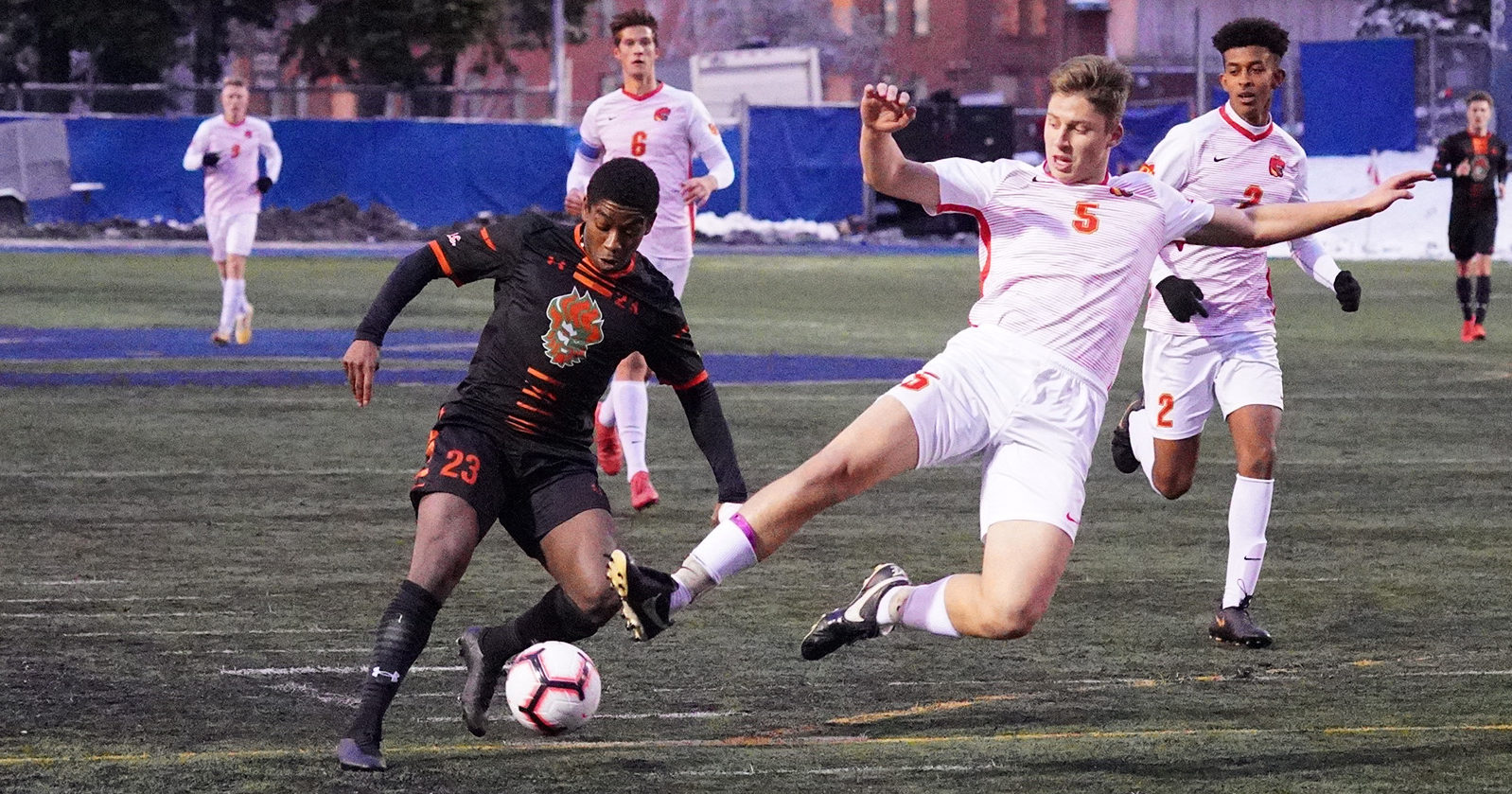 MONTREAL – Stephen Hart sat down in the stands at the University of Montreal and quietly observed.

The Cape Breton Capers from Nova Scotia took on the Calgary Dinos in the third of four quarter-finals matches in the 2019 U SPORTS National Championships on Thursday, and the HFX Wanderers FC coach was on scene, taking in the action on the pitch ahead of the 2019 CPL-U SPORTS Draft next Monday.

Cory Bent got the party started for Cape Breton, plucking an audacious chipped through pass by teammate Charlie Waters – remember his name, he’s important later – and then twice feigning a shot before burying the ball past the Dinos goalkeeper.

Waters (there he is) then added a hat trick, the result of a penalty and two goals from open play, which he coolly took, with Bent and fellow Capers standout Caelan Budhoo in support, as well as former HFX defender Peter Schaale in the backline, of course.

“There are some of my best friends on this team,” Schaale told CanPL.ca after the match. “I was looking forward to returning.”

Schaale, drafted in last year’s CPL-U SPORTS Draft, returned to Cape Breton before the end of the 2019 CPL season in order to finish off his degree – the beauty of a mechanism devised by the CPL and U SPORTS to allow student-athletes to preserve their eligibility and still play pro soccer in Canada.

But Schaale’s next step has yet to be determined – for the younger talents at Cape Breton, their journey is just getting started.

U.K.-born striker Bent, 22, is one such talent; he scored 25 goals in 37 appearances this season, and could be picked in the 2019 CPL-U SPORTS Draft. He certainly relishes the opportunity to play in the CPL.

“I think that’s what I want to do at this point,” Bent answered, when asked of his CPL intentions. “I’ve really enjoyed my university career here, and I like the lifestyle in Canada. It’s a little cold for me [laughs] but I think I’m getting used to it. It’s a really interesting league. Obviously Pete went last year, and we’re roommates, so he’s let me know a lot about. And, I’ve watched quite a bit of it.”

He’s not the only one.

“Players like Tristan Borges and Marco Bustos are big role models for me in that attacking midfield role,” offered Budhoo, a 23-year-old talent out of Winnipeg who brings a versatile left foot to the Capers’ midfield.

The real star on this day was Waters, a third-year student who torched the Dinos. The 22-year-old Lancashire native brought experience from Liverpool and Manchester United academies to Cape Breton, and while an injury ruled him out last year, he’s bounced back in time to make a run at a spot in a CPL roster.

“It’s always nice to get a goal– sorry, a hat trick,” Waters began, as he spoke to CanPL.ca after the match.

“And, it’s an exciting thought, joining the CPL. I don’t want to get caught thinking too much about it, because I’ve got these games first, but it’s massive. I watched the CPL over the summer, and it would be amazing to be a part of it.”

Whether it’s Hart selecting locally, or another CPL coach looking over at Cape Breton, the Nova Scotian outfit has certainly turned heads in Montreal, handily defeating the Dinos 4-1 to advance to the semi-finals.

CanPL.ca will be in Montreal for the entire 2019 U SPORTS National Championships ahead of the 2019 CPL-U SPORTS Draft on Monday, Nov. 11. Stay tuned for more features, interviews, and a full day of draft coverage.