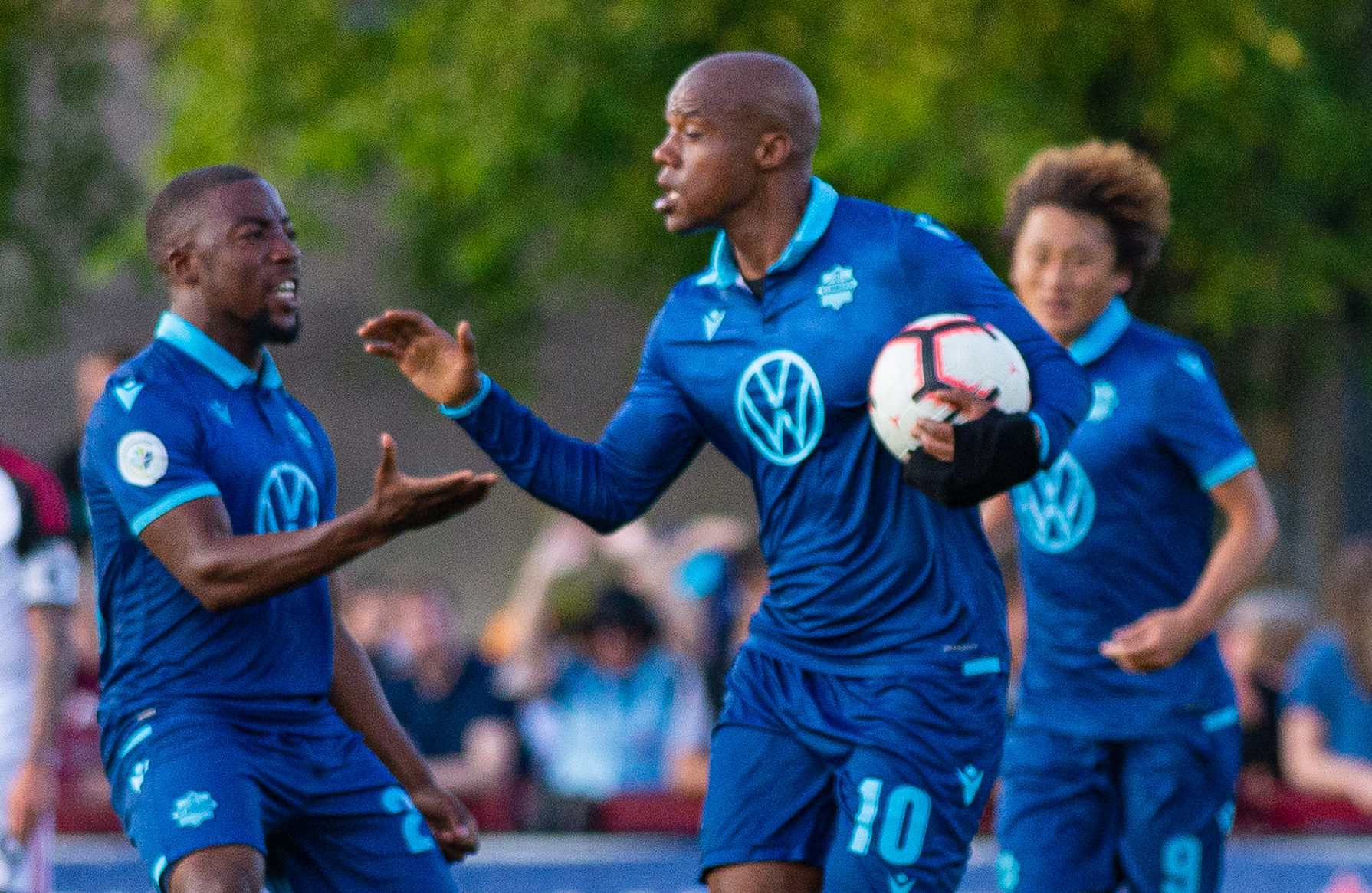 TORONTO – Putting together a new club was never going to be easy.

That was the task that Stephen Hart took on when he became manager of HFX Wanderers FC in June 2018. As preparations for the inaugural season of the Canadian Premier League began, Hart compiled a side from a variety of sources, casting his net far and wide for talent.

“There was a little bit of difficulty because you are starting from scratch, but we came together,” Hart said. “It took longer than I anticipated for us to really understand each other and for the players to understand what I wanted from them.

“Slowly, but surely you work away on the field and things begin to fall into place.”

A wide mix of players can be both an asset and a weakness. It takes time to meld into a cohesive unit, but once it does, there is a depth to the style.

“You can see the different backgrounds coming together,” said defender Matthew Arnone. “It’s a process. We got off to a slow start because of that – no excuses – but there is a difference of footballing cultures, players coming from Europe, from Asia, from South America and trying to mix that all under Stephen’s teachings, buying in.

“We need to continue with the process, but I see it coming along much quicker than I though it would.”

Progress has been hampered by a rash of injuries that has forced Hart to navigate fixtures at times with one hand tied behind his back.

“The real difficulty happened with when we hit an injury bug, that threw things off,” lamented the coach. “We had to mix and match players not in their most comfortable positions.

“We’re still not healthy, so that is hindering where we should be.”

Luis Alberto Perea, Chrisnovic N’sa, Chakib Hocine and Juan Diego Gutierrez, to name but a few, have all missed significant minutes. All have returned, to some degree, but others – Elton John and Akeem Garcia were on the bench Saturday, listed as questionable – have been added to the growing list of the walking wounded.

HFX would win one of their first three matches, at home against Forge FC, beginning a trend of being dominant at home and struggling on the road. In seven CPL matches at the Wanderers Ground, HFX have lost just twice, both to eventual Spring Champions Cavalry FC. Through eight away matches in league play they are yet to win.

It was in Qualifying Round 1 of the Canadian Championships in May, where Halifax squared off with League1 Ontario side Vaughan Azzurri, that the side learned a valuable lesson.

The Wanderers would win the first leg 3-2 in Vaughan, but lose the second 1-0, prompting some nervous moments as the clock ticked down. HFX survived, advancing on away goals with the series tied 3-3.

“That game against Vaughan, that second leg,” recalled defender Peter Schaale. “After we were really upset because it shouldn’t happen.

“Minds started to click: ‘OK, we have to get our (expletive) together now and work hard.'”

“It humbled us,” explained Arnone, who used to play for Vaughan. “We got away from danger, something that was not expected to happen, especially the way we came out in first leg. A lot of us thought they were going to roll over and die.

“Credit to them. I know the club, know the philosophy, it’s a ‘Never say Die’ attitude, but down 2-0 we looked in the driver’s seat and they gave us a scare.”

HFX took that lesson to heart.

“One of the learning curves for a number of players (was) understanding the effort necessary to put in during the game, from a mental standpoint and a physical standpoint,” said Hart. “(That) started to slowly evolve within the players. They started to see.”

“You could tell them,” continued Hart. “But until they really experienced it for themselves and worked at it in training on a more consistent basis, it doesn’t fall into place.

“It began falling into place just after the cup loss because they saw the small margin between getting a result and not.”

HFX would lose to Cavalry in CPL play a few days later, but were inspire to results in all but three of their next nine matches, league and cup: losing twice to Cavalry and once to a resurgent FC Edmonton on Canada Day as the Spring Competition came to an end.

That stretch included the next round of the cup, a series against Valour FC in June, where HFX were dominant.

“We knew we were in tough versus Valour,” recalled Arnone.

“Those two games were a big confidence booster.”

They won the home leg 2-1, fighting back with two quick strikes after the visitors had taken the lead and then proved too much in the second leg, winning 2-0 to advance 4-1 on aggregate, just their second away win in all competitions.

Fast-forward a few weeks and the tide turns, as seasons tend to do.

The Fall Competition began with a home win over York9 FC, a loss against Cavalry in Halifax, and a strong showing in a 3-2 first leg home loss against Ottawa Fury FC, but in the midst of a two-week, five-match road trip, those same bugbears – away matches, injuries, mistakes – have resurfaced.

HFX have now lost their last four in the league – most recently a 6-2 humbling away to York9 on Saturday – and were knocked out of the Voyageurs Cup last week by Ottawa, drawing 2-2 in the second leg to lose 5-4 on aggregate.

Their travels conclude on Wednesday when they visit Edmonton, but a moment of rest will have to wait until mid-August, when they have a full nine days between matches as two home matches come in quick succession with the visit of Valour next Monday and the arrival of Cavalry, again, the following Saturday.

The three-match homestand concludes on August 21 with a match against Forge FC.

The solution to the current funk for Hart is clear: “Strive to get healthy, create that competition within the squad.

“We, as a team, have to strive for more consistency in what we do. The errors we’ve made are gifts to the opposition.”