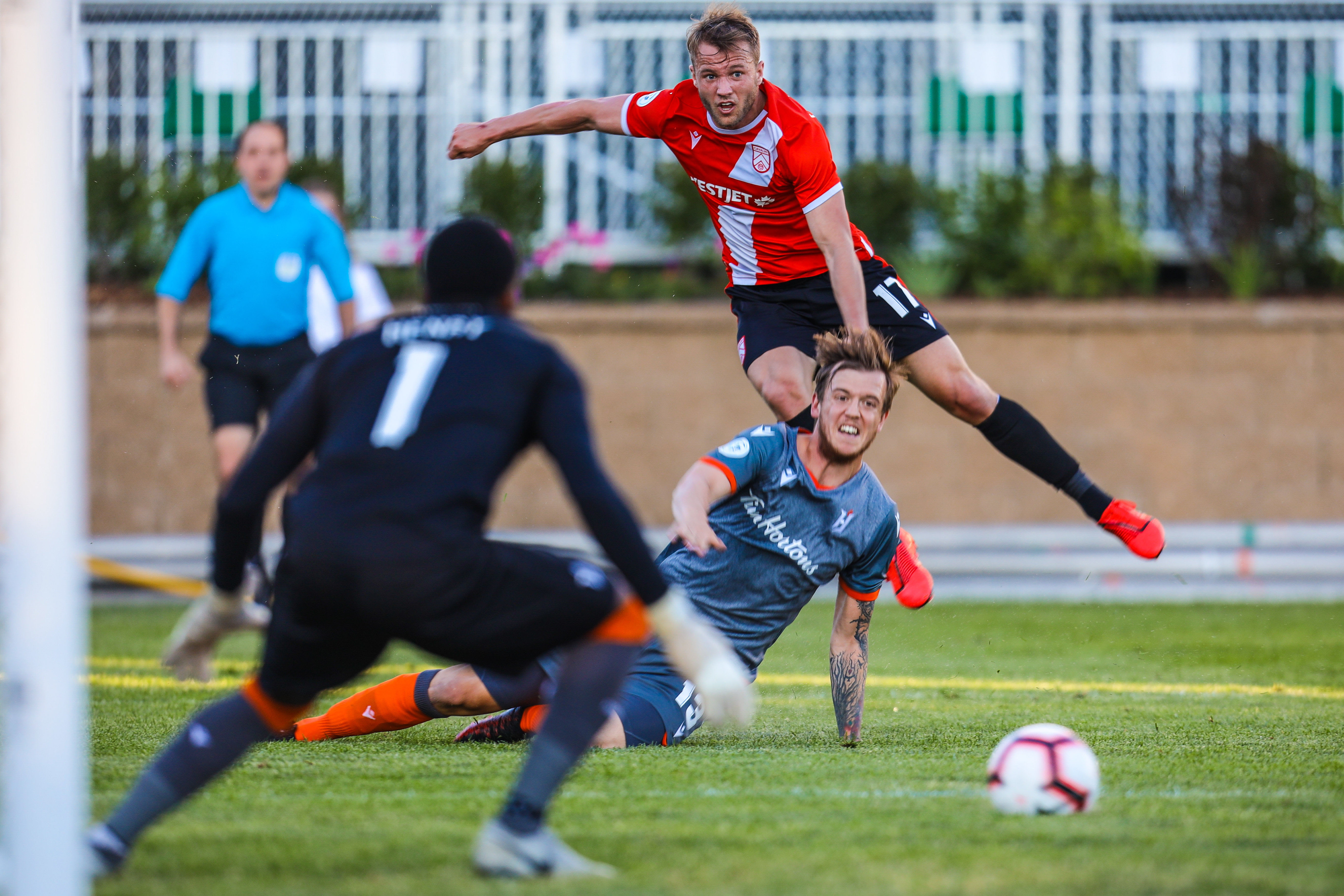 Cavalry FC attacker Nico Pasquotti passes the ball against Forge FC. (Sergei Belski-USA TODAY Sports for CPL).
By the numbers: 3 insights on passing from across the CPL
2019-09-24
by
Armen Bedakian, Supervising Editor
News

The CPL season is fast approaching its conclusion, with Cavalry FC already locking up a spot in the Canadian Premier League Finals, likely to be joined by Forge FC, who can clinch their berth with a win on Saturday, alongside other favourable results.

As such, we’re at the point in the campaign where there’s enough meaningful data for a bit of reflection and review, so as we approach this final stretch, perhaps a look at Forge and Cavalry’s biggest strength – their ability to out-pass opposition – is in order.

We’ll be breaking down our passing metrics into three positional categories: defenders, midfielders, and attacking supporters.

Here are a few statistical insights about CPL passing percentages and successes, with data provided and presented by OPTA.

Before we get started …

It’s important to note a couple things before we dive into these positional breakdowns.

Since the season isn’t over yet, these numbers are subject to change. We’ve used a minimum cutoff of 300 passes to rank and sort players, so as to reduce instances where players with only handfuls of passes end up ranking high in metrics such as accuracy or attacking effectiveness.

Here are a few big-picture takeaways from the league’s passing metrics, so far:

Most successful passers: Forge’s Daniel Krutzen leads this category with 971 successful passes, just ahead of York9’s Luca Gasparotto (965). Mele Temguia (842), Manny Aparicio (838), and Kyle Bekker (824) round out the top five when it comes to passes completed, but this metric simply takes the raw number of total touches and juxtaposes it to how often they’re converted to a teammate.

Most accurate passers: Pacific’s Hendrik Starostzik ranks first among the league in passing accuracy (89.25 per cent), with Edmonton’s Ajay Khabra coming in at No. 2 (87.96). Other top players include Elimane Cisse (87.9), Joe Di Chiara (87.04), and Mason Trafford (86.99). These players may not get as many touches as their counterparts above, but they are more effective when they do.

Least accurate passers: On the flip-side to this argument, there are a few players who hit below 70 per cent in pass accuracy, though the list is largely populated with goalkeepers, who aren’t necessarily expected to rank high on these sorts of metrics, anyway. However, with Valour goalkeepers Matthias Janssens (57.22) and Tyson Farago (60.06) coming in at No. 1 and No. 3 respectively, there may be an argument to be made for turnovers of possession, which have directly and indirectly lead to Valour leading the league in goals conceded (41), compared to Cavalry’s 14 at the low end.

Now, let’s break this down a little further.

1) How defenders get involved in the play

As indicated above, some of the league’s most successful and accurate passers emerge out of the backline, which makes sense; there’s less direct pressure than in the middle of the park, and significantly more lateral and forward passing options than up top. Here’s how the league’s defenders rank:

So, these are the numbers. What can we read from them? In looking at goals conceded in 2019, Pacific FC’s backline may be effective on the front-foot, but with 38 goals against, the Islanders have conceded the second-most goals in 2019. Cavalry’s Trafford ranks top when averaging out the median for pass completion, pass accuracy, and passes forward, making him the best “ball-playing centre back” out of a backline in the league.

Schaale’s league-low 68.52 per cent accuracy wasn’t necessarily indicative of a major flaw in his game, either; HFX rank dead-middle with 30 goals conceded in 2019. But, with Langwa and Bona on either end of Schaale’s backline also ranking among the five least effective passers, there’s a pretty clear case to be made that the Wanderers need to do a much better job of building out of the back – though this may also be a symptom of the amount of pressure HFX absorbs, making it difficult for either fullback to really get a grasp of the match on the attacking front.

Before we get into the midfield, let’s take a look at some of the league’s attacking contributors up top, whether as wingers or centre-forwards.

Typically, attacking players of this ilk don’t focus on pass accuracy, especially those who are more inclined to dribble and shoot. It’s part of the reason why Barcelona’s tiki-taka approach was so very overwhelming in its heyday – attacking wingers and forwards don’t usually concern themselves with the intricacy of the midfield build-up.

Conversely, it’s why players such as Randy Edwini-Bonsu, Anthony Novak, Austin Ricci, Cyrus Rollocks, Tyler Attardo, Glen Muenkat, Michele Paolucci, and, particularly, Marcus Haber (59.55 per cent accuracy, lowest in CPL for forwards), sit in the sub-70 percent accuracy category – despite the fact that they are some of the most effective individual attackers in the league. All of these players also rank low when looking at total passes successfully completed, overall. It’s not their job, really.

Here are a few more numbers to chew on:

Crosses into the box (successful): Edwini-Bonsu (eight) and Rodrigo Gattas (eight) lead the league in crosses into the box, with Edmonton’s Oumar Diouck (seven) just behind. All eight of Gattas’ crosses came from open play, more than any other attacker has mustered. Diouck ranks most accurate in crosses completed, however, at 33.3 per cent, ahead of Oliver Minatel (29.41) and Gattas (25).

Team crossing trends/accuracy: When it comes to passes in the final third, Forge tops the list at 2953, compared to HFX’s low of 2077. However, it’s York9 who ranks most accurate in crosses/corners, converting 25.69 per cent of the time, to Forge’s 20.67. Converting isn’t necessarily finding a goal, but in crafting a clear-cut chance on net, too.

Best attacking supporters: Gattas comes in at No. 1 in passes ending in final third, with 232. Diouck ranks just behind (205), as does Cavalry’s Nico Pasquotti (168) – he likes to keep the ball low.

This is a particularly tricky metric to quantify, as midfielders can have two, three, or even four very distinct roles on the field, depending on formation. Since teams generally play with at least one attacking midfielder, and at least one defensive midfielder, that’s how we can break things down a little clearer.

On the attacking front, Mohamed Kourouma from HFX Wanderers FC is an interesting case study. His passing accuracy may be 69.64 per cent (406 successful passes, 177 failed), but he ranks just behind York9’s Ryan Telfer as the league’s most effective line breaker, hitting 146 passes into the box – compared to Telfer’s 152. That puts him above Ramon Soria (126), Kyle Bekker (125) and Marco Bustos (113) in finding his teammates in dangerous areas, right in front of goal. In this case, the tradeoff for accuracy across these players’ metrics is chance creation, which any manager in the world would be more than happy to take.

From a team perspective, no outfit is more dangerous in finding their markers in the box than, you guessed it, Cavalry – 710 times, compared to HFX’s league-low 559. Clearly, Kourouma can’t do it all himself, but even this number isn’t indicative of pure effectiveness, as second-last Forge (562 passes completed into the box), have the second-most goals scored from open play, at 35.

Where accuracy is most important is in zones where turnovers lead to the most dangerous chance at getting caught in transition; typically, this is the midfield anchor point, occupied by a defensive midfielder. To that end, it’s no surprise that Elimane Cisse ranks among the most comfortable retainers of the ball, completing 87.9 per cent of his passes. Joe Di Chiara (87.04) and Alexander Gonzalez (86.7) don’t rank too far behind, perhaps an indication of why their respective York9 and Pacific FC sides are so effective in this metric.

But one name consistently emerged among the top of the crop across all four categories: Cavalry’s Julian Buscher, who has 22 interceptions, 27 tackles won, 106 passes into the box, and 267 passes into the final third to his name. For our money, that makes him the most effective No. 8 in the league.