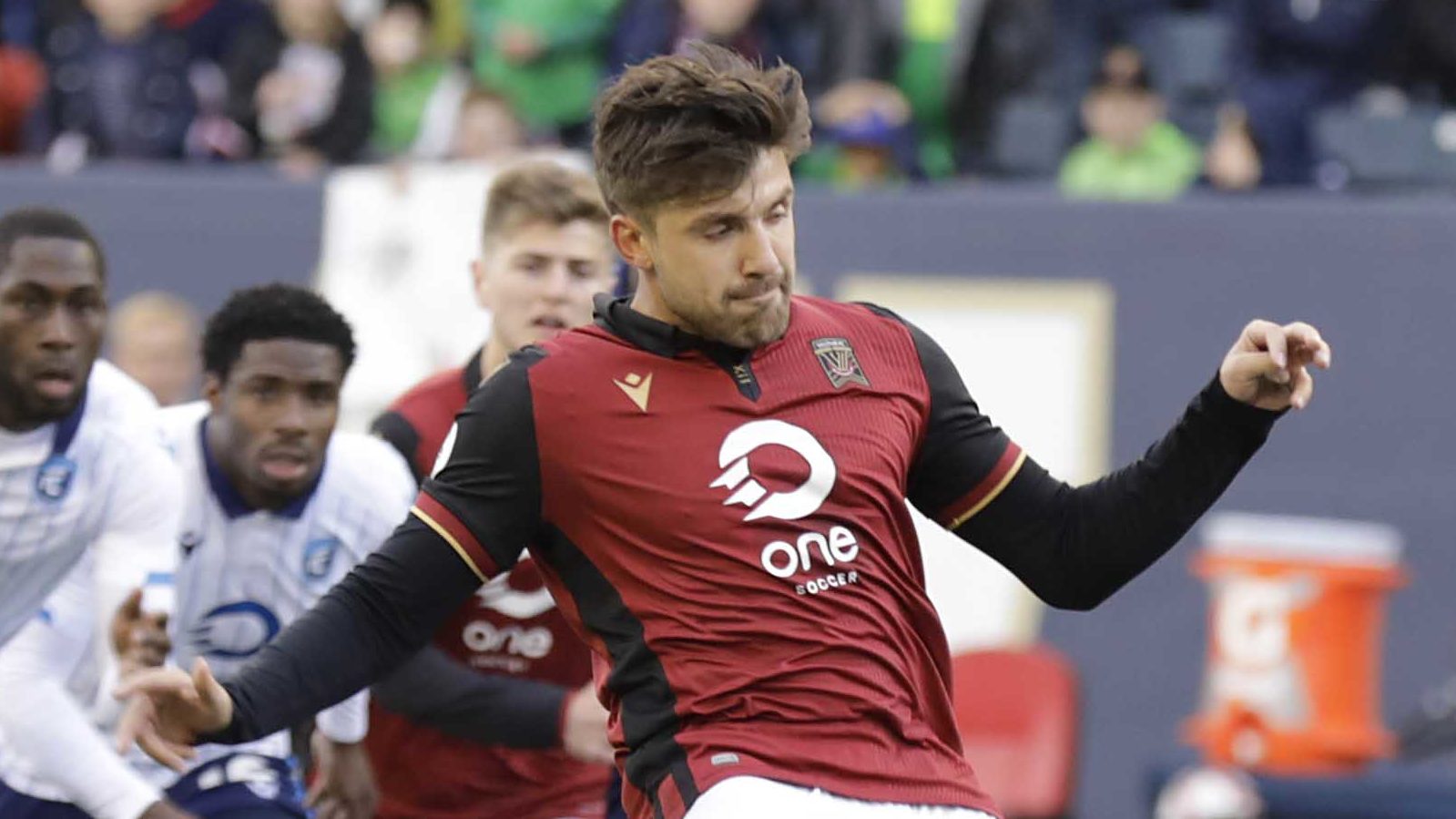 May 4, 2019; Winnipeg, Manitoba, CAN; Valour FC midfielder Michael Petrasso (9) takes a penalty kick in the second half against the FC Edmonton during a Canadian Premier League soccer match at Investors Group Field. Mandatory Credit: James Carey Lauder-USA TODAY Sports for CPL
By the numbers: Petrasso the difference-maker for Valour attack
2019-06-03
News

TORONTO — A few coaches may beg to differ, but something of a hierarchy is emerging in the Canadian Premier League’s spring standings.

At the top, Cavalry and Forge look a cut above the rest. They both had the weekend off ahead of Tuesday’s first leg of their much-anticipated Canadian Championship tie.

At the other end of the table, York9 remains winless and Pacific and FC Edmonton have not won since their very first games of the season.

And in the middle, Valour and HFX Wanderers have been a mixed bag: There are some legitimate reasons to be positive but work to be done if they are to contend for silverware.

Handily, four of the five teams chasing the top two were in action against each other this weekend, giving us an opportunity to gauge their progress.

Here is one big number for three of those clubs to help us do just that.

It’s all about Michael Petrasso in Winnipeg.

Petrasso has created a league-leading 12 chances from open play this season, despite playing more than 100 minutes fewer than his two closest rivals, Forge’s Tristan Borges and Kyle Bekker. They are on nine apiece.

At times on Sunday, he carved Edmonton open on his own.

? @petrasso20 makin moves on FC Edmonton from the sideline!

The 23-year-old’s performance was even more impressive given he was not deployed up front but as a wing-back. And as good as he was there, it’s hard not to wonder about the potential of a Petrasso-Marco Bustos-Ali Musse trident behind a lone striker — or even without one.

Valour are similar to Forge in many ways: They like having the ball and they’re going to create overloads and combinations out wide to penetrate the box.

But Forge is ahead of Valour — and everyone else — when it comes to turning possession into chances, mostly thanks to the Borges-Bekker double act. Valour coach Rob Gale has been forced into a lot of rotation at the top end of the pitch and has not struck upon the same kind of chemistry.

Valour and Forge are similar in terms of style, but the latter has been much more penetrative in the final third. pic.twitter.com/HUhuKf7phw

That’s been a problem at both ends because the more you pass without finding an opening, the more likely you are to turn the ball over in midfield. And then — as we saw in Valour’s loss to Forge — you gift your opponent opportunities to hit you on the counter-attack.

Valour eventually found a way through against Edmonton, but they’ll still need to become a more potent attacking force if they are to start pushing the top two.

Luis Alberto Perea only registered one shot against Pacific – the penalty which won HFX Wanderers the game.

But that was far from the Colombian striker’s only contribution.

Perea might be the single-most indispensable player to his team in the CPL. He has two goals and an assist through three games, for starters, in a team that is not exactly brimming with proven attackers. There are still only 10 names on the list of players with a goal and an assist this season, and Perea’s is the only one with the HFX logo next to it.

But equally as important is the effect he has on the rest of the team. Perea holds the ball up, brings others into play, and drags defenders out of position with his movement.

When he pulls up short, a centre-back tends to follow him. And that creates space for another player to run into — which Akeem Garcia and Kodai Iida did to score the Wanderers’ first goal and then win a penalty for the second respectively.

And the same thing — MacNaughton following Perea — creating the one-on-one situation for Iida against Ryan McCurdy:

The Wanderers remain unbeaten when Perea plays, with two wins and a draw, and it would not be hugely surprising to see him sit out their upcoming Canadian Championship tie in a bid to get fully healthy for their CPL return on June 19.

I think we can now label FCE’s long stretch without a goal a full-on drought.

The Eddies have played 375 minutes of football without scoring since Oumar Diouck notched their second against Valour on May 4, and Gale’s side took its revenge by shutting Edmonton out for a fourth game in a row.

It’s hard to figure out where the goals are going to come from.

Edmonton has had decent contributions from its substitutes: First Diouck, and more recently, Marcus Velado-Tsegaye. They’ve been able to inject some pace and urgency into the attack late on in games, when the starters are tiring and space starts to open up.

But Edmonton’s efforts earlier on have been pitiful. The two shots on target they managed in the first half against Valour was actually a new season high, because they had registered just two in total before half-time in the four matches prior.

#CanPL shots and shots on target in the first half… Edmonton having real problems getting anything going until the subs come in. pic.twitter.com/TnCcfTZfJ8

Jeff Paulus threw a lot of attacking players on the field against Valour in a bid to generate more chances. Diouck joined Tomi Ameobi up front and Son Yongchan dropped to left-back, with two natural forwards (David Doe and Ajeej Sarkaria) in the wide positions.

But the different components didn’t quite fit together. Doe and Sarkaria aren’t traditional wingers, and didn’t provide much in the way of one-on-one dribbling and crossing for Ameobi and Diouck to feed off. Neither was there the kind of playmaking presence of Bustos’ ilk for Doe and Sarkaria to combine with for scoring chances of their own.

Most of the Eddies’ best moments came through full-backs Son and Bruno Zebie.

There are no obvious answers. Getting Randy Edwini-Bonsu and Philippe Lincourt-Joseph back should help, but it’s hard to escape the feeling that Edmonton will need to keep plenty of clean sheets and make the most of set pieces if they are to bounce back in the second half of their spring campaign.