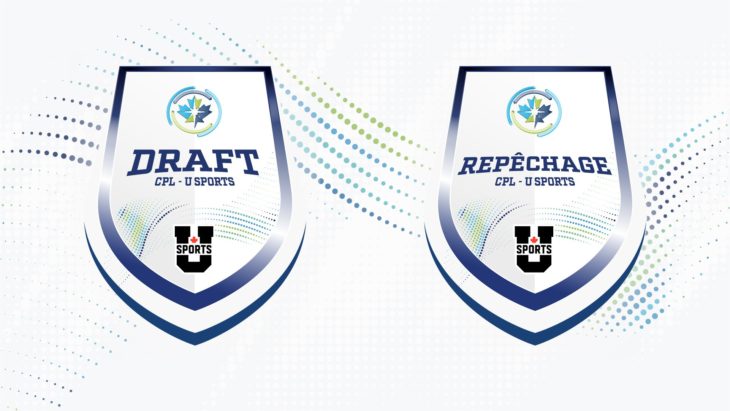 Toronto, ON (December 8, 2020) – After an unprecedented year in the sports world, the Canadian Premier League is pleased to announce that select, top-rated, Canadian university men’s soccer players from coast-to-coast will have an opportunity to earn a spot on a CPL Club through the CPL-U SPORTS Draft. This year’s edition will be conducted via an amended format due to the cancellation of the 2020 U SPORTS Men’s Soccer Championship and Canadian university season across each of its four member conferences.

Each year at the conclusion of the U SPORTS Men’s Soccer Championship, the Canadian Premier League holds a draft for eligible U SPORTS men’s soccer student-athletes who have registered and declared themselves ‘available’ to be selected. This draft is open to any eligible U SPORTS underclassmen that registers.

In the absence of a varsity campaign this fall, the CPL’s Football Development Scouting Division put together an amended plan to accommodate required changes, including delaying the draft until mid/late January 2021 to provide additional time for a robust video recruitment process. The CPL-U SPORTS Draft will consist of two rounds, with eight picks in each round due to the addition of Atlético Ottawa. All 16 draftees will be invited to their club’s preseason training, with the hopes of securing a 2021 U SPORTS Developmental Contract for the upcoming season.

This truly unique partnership between the Canadian Premier League and U SPORTS allows a student-athlete with one to five years of U SPORTS eligibility remaining to sign with a CPL Club, while preserving their eligibility before returning to U SPORTS competition. Several players have also later joined their CPL club on a full-time professional player contract following graduation.

U SPORTS men’s soccer is the highest level of play at the university level in Canada, with 48 Canadian university teams participating.

“The CPL-U SPORTS Draft is a key component to the CPL’s success, and we are doing our best to adapt given the cancellation of the Canadian university men’s soccer season,” said David Clanachan, Commissioner, Canadian Premier League. “Through the Island Games this year we were able to see some of the U SPORTS players shine, albeit in a modified season.  It is important to us to continue to support and provide opportunities for university players to play professionally and be part of a professional men’s soccer league.  We know there are some talented players out there and we have adapted our draft approach this year in an effort to continue to create a pathway for our homegrown players to play in Canada.”

In preparation for the U SPORTS draft in January, the CPL’s Football Development Department, with input from U SPORTS Coaches have been tracking and scouting players to establish a prospects list.  CPL Club Coaches will have access to player profiles and video footage to assist them in preparing for the 2021 draft.

“We are excited to continue providing this important developmental opportunity for our men’s soccer student-athletes through the CPL-U SPORTS Draft,” said Lisette Johnson-Stapley, Chief Sport Officer at U SPORTS. “Canadian university soccer players had the chance to display their impressive talents at the Island Games over the summer thanks to our ongoing valuable partnership. We look forward to the next draft class having their names called by CPL clubs from coast-to-coast and watching them flourish in the league in preparation for a return to varsity competition.”

Canadian Premier League (CPL) is Canada’s professional men’s soccer league that debuted on April 27, 2019. Playing in world-class and unique venues, and partnering with strong community-led ownership groups, the CPL is a league for Canadians by Canadians that will bring professional soccer to communities coast-to-coast.