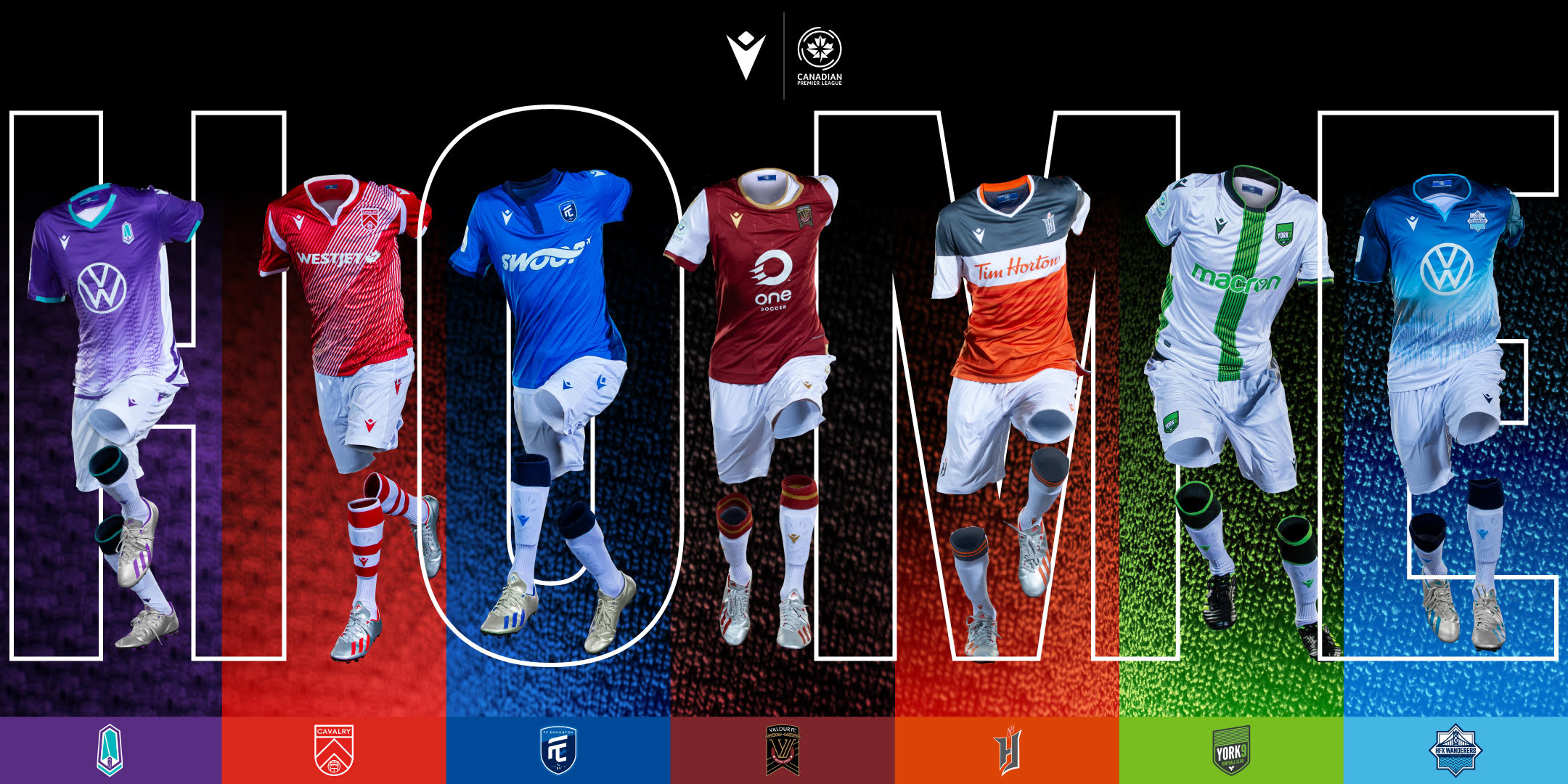 As part of the process, Macron designers worked in collaboration with all seven Canadian Premier League clubs during the design process developing high quality custom kits with unique looks to provide the needed professional technical features while enhancing them with exciting graphic designs.

The League’s second season is no different than the inaugural season when it comes to kit design.  Each kit’s look incorporates the symbolism and identity of the club within the design. The wide range of vibrant and exciting colours, all enriched by design elements including pinstripes, sublimation, embossing and gradient prints evoke standout jerseys on and off the pitch.  Each jersey is inserted with a unique graphic symbol, image or letter that is representative of the club’s identity, paying homage to the cities where the clubs play.

Each team-authentic Home jersey will be available online for purchase at: HFX Wanderers FC, York9 FC, Forge FC, Valour FC, FC Edmonton, Cavalry FC and Pacific FC for $119.99 CAD (Men’s), $119.99 (Women’s) CAD and Youth $79.99 CAD. Fans will be able to customize each jersey with either their favourite CPL player or own names and number for an additional $34.99 CAD

Macron (www.macron.com) is a leading European company in the production and sale of active sportswear, operating in four main business areas: Teamwear, sportswear and accessories for team sports (football, rugby, basketball, volleyball, baseball, handball, futsal, running); Merchandising, official kits, free time products and accessories for the supporters of the club sponsored by Macron; Run & Train, technical apparel for individual runners and for fitness; Athleisure, sports inspired apparel for leisure time, for those who wish to wear Macron outside pure sporting activities. Macron owes it success to the capacity of interpreting the needs and demands of those who do sport, developing high quality and technicality products.

We Are Many, We Are One! Divided on the field, but united in our hearts, we celebrate our shared passion for soccer with this mantra on the back collar of all our kits.

Every jersey features the league’s mission “For Canadians, By Canadians” on the inside neck – an everyday reminder of why this league exists and to inspire our mission to grow the beautiful game of soccer in Canada.

The new icon of the Italian brand, the Macron Hero characterizes and identifies the technical garments. The logo features the human body and takes inspiration from the tip of the spear, by definition a representation of dynamos and speed. The Macron Hero symbolizes even more effectively the joy at the end of the challenge, the achievement of a target, fatigue, passion and determination and epitomizes the Macron philosophy: “Work hard. Play harder”.

Pacific FC’s home jersey maintains their primary colour – Starfish Purple. Inspired by Vancouver Island’s sunset, the fade design from purple to white is the juxtaposition between the Pacific sunset and the crashing waves on the shore.  The creative stripe design is inspired by the island’s star fish (sea star).

Poseidon’s Trident is showcased on the back of the jersey as a symbol, to control the game, and protect the island.

2020 celebrates a reimagined Slash jersey for the Cavs. A more fashion-forward interpretation of last year’s jersey while maintaining the design inspired by Lord Strathcona’s Horse regiment uniform, a nod to honour the regiment.

Fans will recognize the boldly featured “C” on the back representative of a horseshoe that is paying homage to Calgary – the city famous for horses, and the location of the Club at Spruce Meadows.

FC Edmonton classic jersey is inspired by their 10-year anniversary (February 9, 2010). With a clean design representing the last 10 years in a traditional Royal Blue kit. Royal Blue been synonymous with the Club since its inception and was a fitting celebratory colour for this year’s jersey.  Small ten-year celebration nuances have been incorporated into the jersey featuring an embossed roman numeral “X”. The X on the back of the jersey incorporates the Eddies symbol of good luck, Rally Rabbit.

Valour FC’s Home jersey design is Inspired by the beauty, culture, people of Manitoba while giving a nod to the province’s 150-year history. Distinctive element including a subtle pin stripe with a fashionable double neck collar are in this year’s Burgundy with gold accent jersey. The famous Golden Boy from the Manitoba Legislative Building in Winnipeg, arguably Manitoba’s best-known symbol is embossed on the back with the number 150 to celebrate Manitoba’s sesquicentennial

The Canadian Premier League 2020 Champions will be sporting the Gold Champion Patch this season.  Forge FC’s jersey design is inspired by Hamiltonians – the six regional municipalities: Ancaster, Dundas, Flamborough, Glanbrook, Hamilton and Stoney Creek with the subtle horizontal stripes on the front.  Forge’s iconic secondary logo, the forge hammer is proudly represented on the back of the jersey.  The hammer evokes the Hamilton story, the tool used to shape the city’s original industries, and also represents the on-going development of new industries.

A feature that isn’t changing is the Nine Stripes rising vertically representing the York Region communities on this year’s shirt. Incorporating a design touch, the stripes have been adapted to both sides to compliment the classic white jersey. A sublimated Y9 on the back of the jersey is another distinctive element along with a callout to York Region’s 9 municipalities Aurora, East Gwillimbury, Georgina, King, Markham, Newmarket, Richmond Hill, Vaughan and Whitchurch-Stouffville.

Music is an integral part of Halifax, with live music always playing somewhere in the city every night of the week. The Wanderers jersey design is a reflection of music and their deep ties to the community. Inspired by the famous song, Barrett’s Privateers by Stan Rogers, a soundwave of the song is boldly incorporated into the fade design on the front of the jersey. The song is a modern folk song in the style of a sea shanty, full of many authentic details of privateering in the late 18th century. It is regarded as one of the Royal Canadian Navy’s unofficial anthems and the unofficial anthem of Atlantic Canada. The sublimated gradient print is inspired by the blue of the Atlantic Ocean to the light Halifax sky.

“Together x From Aways” is boldly centred on the jersey’s back.