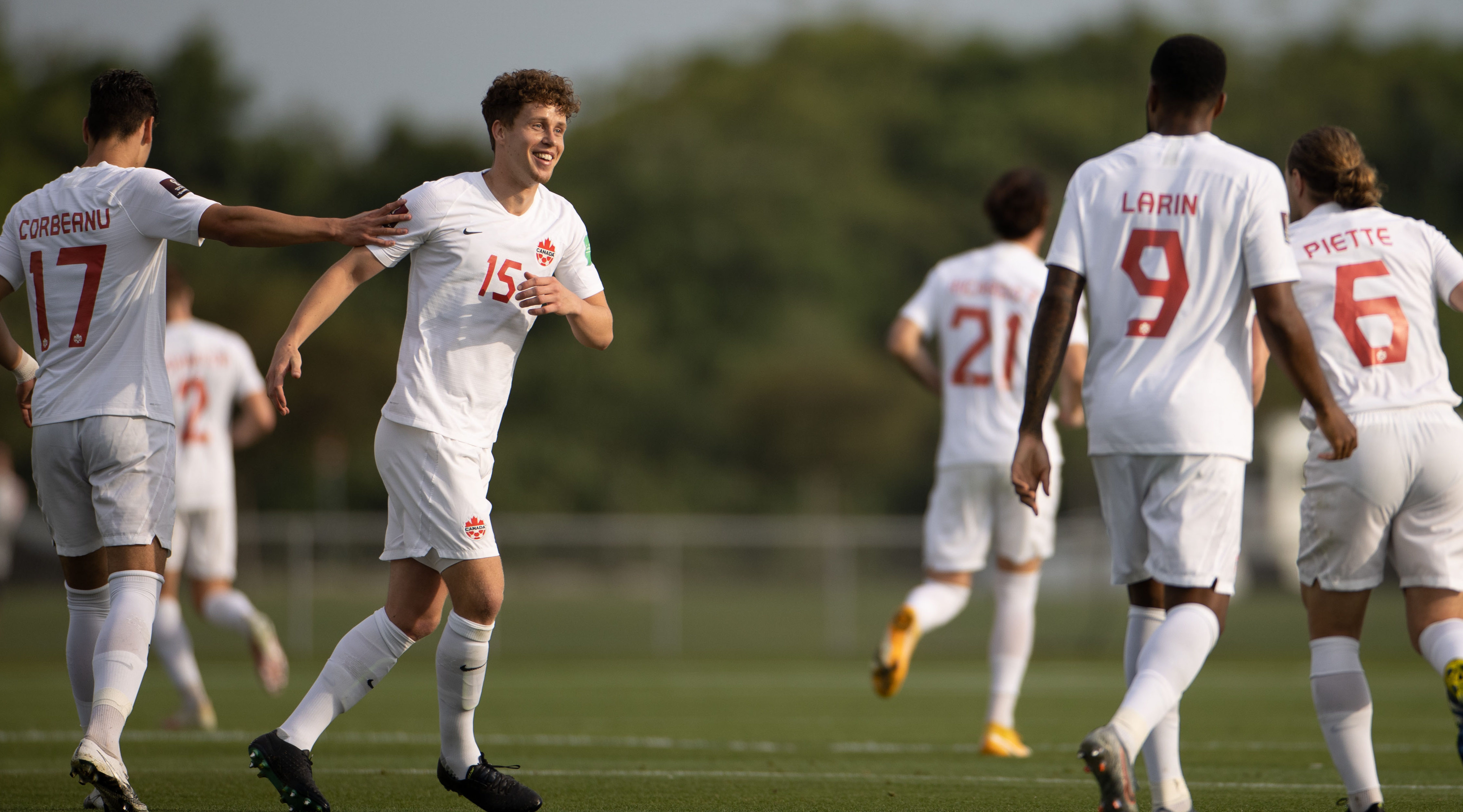 A record-setting night for the Canadian men’s national team.

John Herdman’s side thrashed Cayman Islands 11-0 on Monday in their second Concacaf qualifying match for the 2022 FIFA World Cup in Qatar to record their biggest win in program history.

Les Rouges were up 6-0 at halftime with four players earning their first Canada goals: Frank Sturing, Mark-Anthony Kaye, Alistair Johnston, and David Wotherspoon. Lucas Cavallini scored an eight-minute hat-trick in the second half, with Alphonso Davies adding insult to injury with a goal deflected off a missed Kaye penalty.

The 11-goal total bests an 8-0 Concacaf Nations League win over the US Virgin Islands in 2018 and leaves the side top of their qualifying group with two wins and a staggering +15 goal differential following a win over Bermuda.

As you could imagine, Canadian soccer Twitter was a fun place to be Monday.

Here’s how Canadian soccer reacted to the record-setting match.

Cyle Larin: A soccer player who can not stop scoring for #Besiktas

(And also for #CanMNT)

David Wotherspoon gets his 1st goal for #CanMNT, too!

At what point does #CanMNT running the ball back to the centre circle after every goal become unsportsmanlike?

Cyle Larin now alone in seventh place on the all-time #canMNT goal-scoring list, with 12. In his sights next: Ali Gerba, who could blast the ball harder than anyone else I've ever seen live.

At 5-0, the French journalist Emmanuel Gambardella shut his typewriter and said: "Up to five goals is journalism. After that, it becomes statistics.”#canMNT vs. Cayman Islands

Completely dominant v the Cayman Islands. Never thought I’d see the day where the #CANMNT had so many exciting players 🇨🇦

Hopefully we can see a record broken today 👀

Canada's record for biggest win is 8-0. Can they beat that? 👀#CanMNT

Half time!! Well, that was fun! How's everyone doing? #CanMNT #WCQ #AllezLesRouges pic.twitter.com/cvTZbRnV32

Most goals scored in a single game in the history of the Men's National Soccer team: 8

Canada has six in the half against Cayman Islands. #CANMNT

Let’s not get too confident, 6-0 is the most dangerous score in sports. #CANMNT

At this rate Crepeau is even going to score. #CanMNT

It's 9-0 for #CanMNT, and @AlphonsoDavies has set a new all-time record for 🍁

Records are made to be broken and thoroughly fitting that a player who has broken so many other records as a Canadian player be the one to score Canada's 9th of the match, Alphonso Davies' goal a new record for most #canmnt goals scored in a match.

hey @martythompson_ 'member when I manifested a Cavallini goal on the podcast?

Happy for Cavallini. I know he's his harshest critic. Bags a hat-trick in 15 minutes after a tough outing last week.

Now has 14 goals in 19 appearances for the #canMNT, just one back of fifth all-time. #VWFC

Some fun stats (unless you’re from the Cayman Islands 😬) in that 11-0 Canada victory:

– Cavallini with a hat trick after just 15 mins on the pitch
– Four 1st career goals for 🇨🇦 (Sturing, Wotherspoon, Kaye, Johnston)
– Most goals in a match by the #CanMNT (previous high of 8)

#CANMNT have had EIGHT hat tricks in their near-century long history, FIVE have been in past 11 matches.

Adding the Larin and Cavallini hat tricks this week to the previous… https://t.co/eb435CxCPv

A Lucas Cavallini hat-trick, 1st goals for a number of players, and a new team record after the 9-0 gulf!