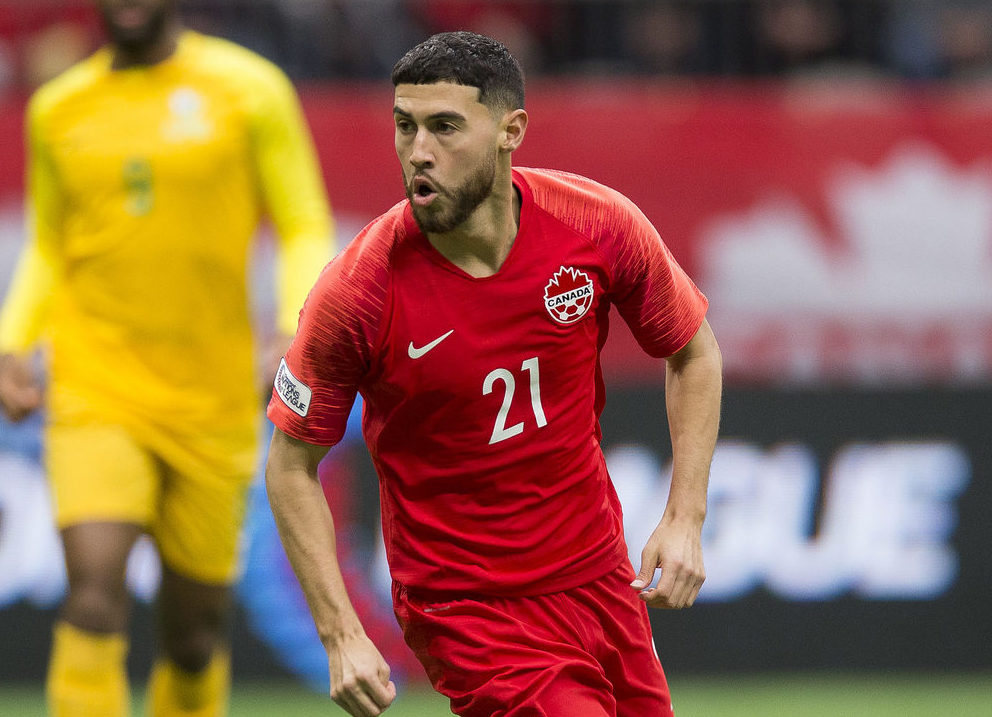 Canada's Jonathan Osorio during a Nations League qualifier with Fr. Guiana. (Canada Soccer)
CanMNT’s Jonathan Osorio on Beyond the Pitch: ‘These are the most significant games we’re going to play in over 20 years’
2021-09-01
by
Benedict Rhodes, CanPL.ca Contributor (@BTFR17)
CanMNT News

With just one day to go before Canada kick off their next round of World Cup Qualifiers with a match against Honduras, CanPL.ca’s Kristian Jack sat down with midfielder Jonathan Osorio on the latest episode of Beyond the Pitch.

The duo chat about everything from the successes of a new-look Canadian program under John Herdman, to Canadians making big moves overseas, and the expectation — not hope — that Canada has of qualifying to go to the World Cup in Qatar, and much more.

A major theme throughout is that this Canadian team is a tight-knit group on and off the pitch, and that everyone is humble and willing to work for the group.

“I really admire [them], especially the younger guys,” said Osorio. “They’re getting all this hype, making big moves, and they remain humble. It’s the way it should be, but it’s easier said than done. Nobody has changed — Alphonso [Davies] has not changed since he’s been to Bayern Munich, Jonathan [David] has not changed since he went to Lille. I don’t expect Tajon [Buchanan] to change when he gets to Brugge.

Canadian players making big moves to clubs around the world has almost become a regular thing in the past few years, but Osorio was sure to repeat that that doesn’t faze this squad.

“All of these guys, if you look at the transfer market, are worth millions of dollars, but I think we all remember that at one point we weren’t worth anything,” Osorio said with a smile. “We all came from zero, and I think more or less everybody on that team comes from very humble beginnings. We all grew up in similar ways, and I think that’s what bonds us.”

Osorio himself is a leader in the Canadian squad, and a lot of players look up to him. He holds the Toronto FC record for appearances, approaching 300 since making his debut in 2013 — the year where he also made his senior Canada debut. He has since made 42 appearances for the national team, fourth-most in the current squad.

He’s one of the more senior players in the squad, despite still only being 29, and is embracing a leadership role in the team.

“It’s amazing, it’s an honour when I hear that [people look up to and admire him],” he said. “I do believe I’m a humble person, but I am sometimes naïve to the sense that I do sometimes forget the influence I have on some of the younger players… for me being too humble I guess.

“When I hear that, it’s great. I always try to be a good example for the kids.”

Osorio is looking forward to playing for Canada, in Canada, again after travel restrictions forced Canada to play their home games at venues in the United States the first half of 2021. The added bonus is that Canada’s home matches will be at his regular home ground of BMO Field, a stadium he knows better than anyone.

“I’m so pumped, so ready,” Osorio said. “Regardless of any situation, to play at home for your country — in my home stadium — is an honour.

“Factoring everything that’s happened in the past year, two years, it’s going to be more special for sure. On top of that, these are the most significant games we are going to play in over 20 years. All of that together is special, and I hope and I know that the whole country is going to realize that very quickly.”

To watch the full Beyond the Pitch interview with Jonathan Osorio, click here. Canada begin their World Cup Qualifying campaign this Thursday, September 2 with an 8 pm ET kickoff at BMO Field against Honduras. Tickets are available here, and the match can be watched live on OneSoccer from 7:30 pm ET.