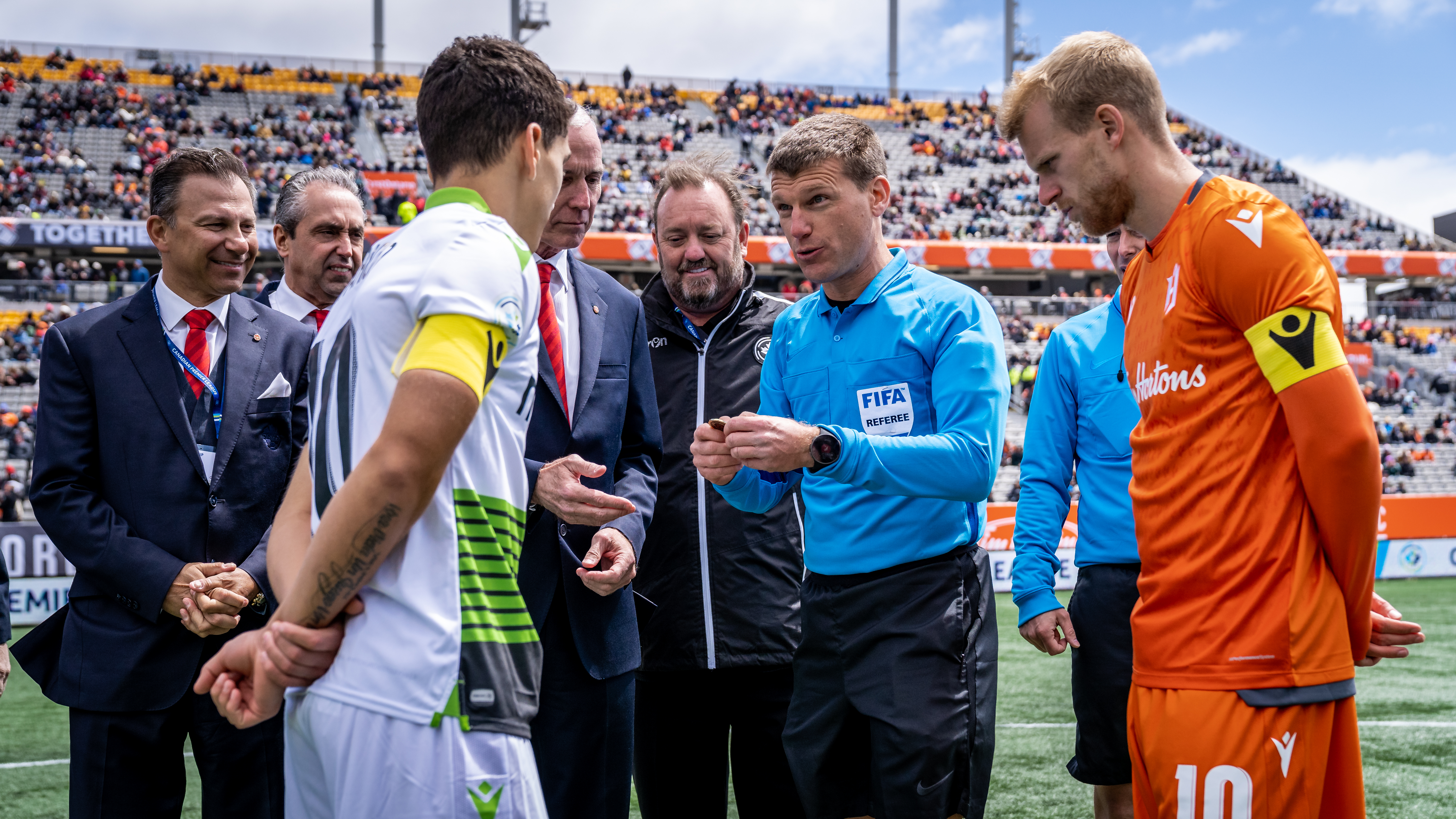 On Thursday, the Canadian Premier League revealed the 2019 Official League Coin, as well as an opportunity giving supporters of the league across Canada the chance to own one of these limited edition coins through a lottery via the Centre Circle App.

This coin commemorates our inaugural 2019 season, featuring the seven founding clubs on one side, and the league’s logo on the other. For those astute onlookers, this is indeed the same coin used by referees during the pre-game coin toss ceremony, too.

In the spirit of commemoration, let’s look back at five historic moments in the Canadian Premier League (so far):

On April 27, 2019, the Canadian Premier League finally kicked a ball for the very first time, as Forge FC of Hamilton hosted York9 FC in the first edition of the 905 Derby at Tim Hortons Field. The historic moment was capitulated early on, as York9’s Ryan Telfer scored the first goal in league history just three minutes into the affair.

But, Forge would not be denied a goal on their home turf, with Kadell Thomas scoring his club’s first goal in the second half, equalizing the scoreline to 1-1 and seeing the two teams to the very first draw to earn the very first points in the CPL, too.

There were many, many historic moments in this matchup between two fast foes, though the Telfer goal will likely be regarded as the most iconic. For those roughly 18,000 or so who watched the game live, and the over 1 million watching on CBC or OneSoccer, this match kicked off a series of historic moments which followed.

While a 1-1 draw at Tim Hortons Field may have set the stage, it was Pacific FC over at Westhills Stadium on Vancouver Island who had the privilege of celebrating the first win in CPL history. That came courtesy of a 1-0 victory over visiting HFX Wanderers FC, in a match featuring the third-longest road trip in the world of soccer, by way of a header by defender Hendrik Starostzik.

With a 1-0 win in the bag, Pacific goalkeeper Mark Village also became the first net-minder to record a clean sheet in CPL history.

In the following match day, away outfit Valour FC visited Pacific FC and recorded the first victory away from home, defeating Pacific 2-1 to earn three points of their own, with Stephen Hoyle notching Valour’s first-ever goal, and Dylan Carreiro finding a second-half winner. In a busy week of action, Pacific experienced the highs and lows of professional soccer, bringing a new story to the sport on Vancouver Island.

1st from the spot

Valour wasn’t done making history in the early goings of May, as another memorable moment took place at IG Field a few days after their victory over Pacific against visiting FC Edmonton.

Valour midfielder-turned-forward Michael Petrasso cemented his spot in the CPL’s record books by scoring a consolatory goal in a 2-1 defeat to the Eddies from the spot – the very first goal ever scored from the first penalty ever drawn in the league.

The former QPR and Montreal Impact man beat goalkeeper Connor James by shooting to the left, spoiling his clean sheet with five minutes left in the match, and while it wasn’t an audacious ‘Panenka’ finish that typically earns plaudits, this penalty goal was inscribed in future obscure ‘CPL trivia night’ lore all the same.

When Forge hosted visiting Cavalry FC at Tim Hortons Field back in May, another milestone moment was achieved for the CPL, as Carol Anne Chenard led the first-ever all-female officiating crew for a men’s professional game, alongside assistants Stéphanie Fortin and Chantal Boudreau and fourth official Alexis Vaughan.

Among the goal-scoring feats in the league, the first hat-trick was certainly the one that many a striker had probably desired prior to kicking off the 2019 season. And, while it took all the way to five weeks into the Fall season to find it, a hat-trick was exactly what York9 forward Rodrigo Gattas put on the board as his team defeated HFX Wanderers 6-2 at York Lions Stadium.

Gattas scored three excellent goals en route to this historic achievement, and celebrated three points for his side as well, notching his name in the history books for this solo effort.

So, these five moments are just a taste of what the CPL has already offered in 2019 – and, for those following along, the story continues to evolve, as Cavalry, winners of the Spring portion of the season, will be a part of even more historic moments when the 2019 CPL Championship kicks off in late October.

If you want to commemorate this moment in Canadian soccer history for yourself, check out the the Centre Circle App and throw your name into the lottery for a chance at owning a limited edition CPL 2019 Official League Coin – lottery begins Aug. 2 at 11 p.m. ET.