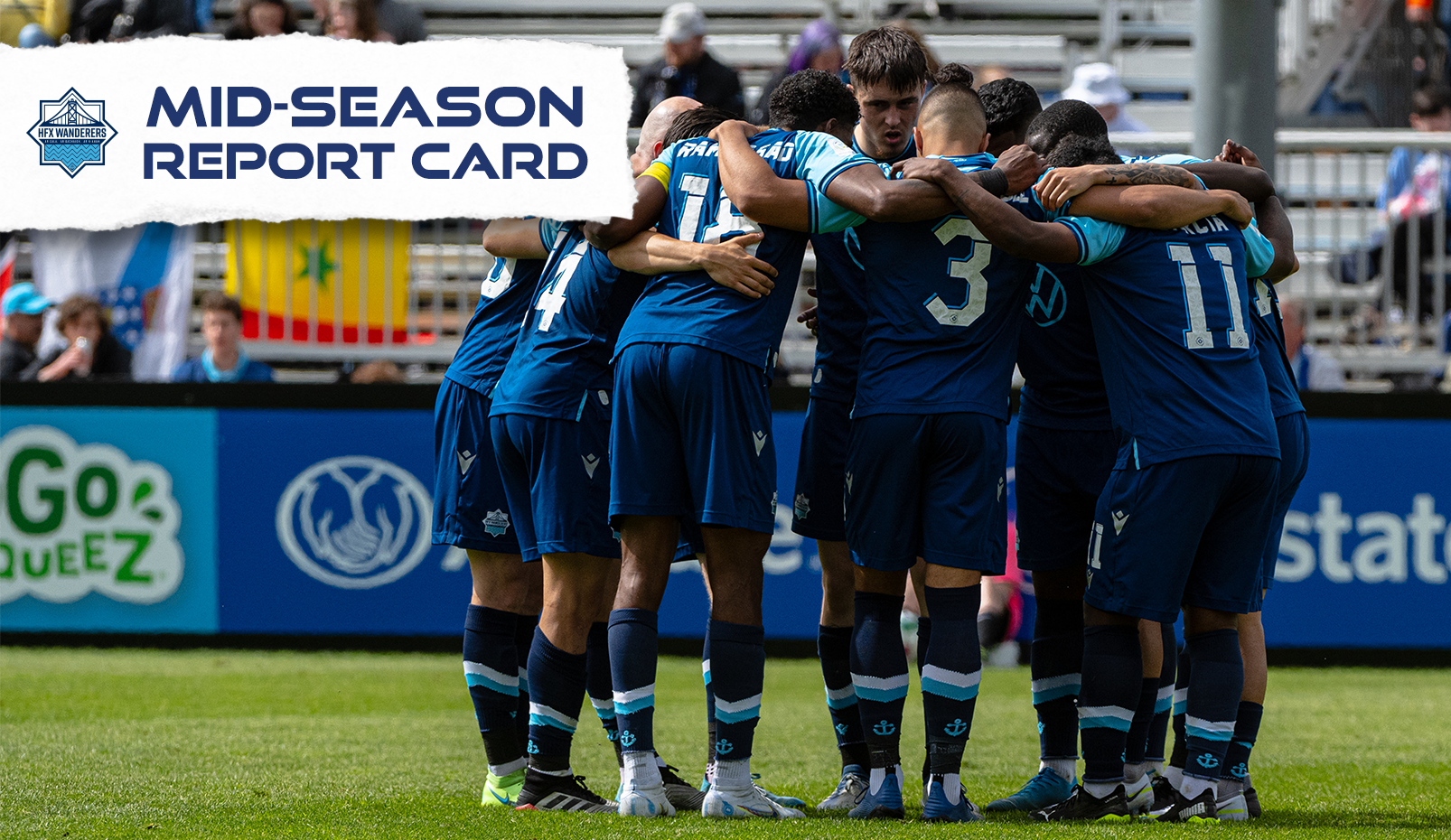 Two report cards will be released per day over the course of this week. Up next: HFX Wanderers FC.

Alexandre Gangué-Ruzic: It’s been a bizarre campaign on the Atlantic coast, where the Wanderers are currently mired in what can be best described as a mixed season. There have been some positives, such as their ability to pick up big wins, especially on the road, but there have also been a fair few negatives, too, such as their injuries, along with the fact that their offensive and defensive numbers overall haven’t been all that great. To be fair, losing 2021 Player of the Year João Morelli as early they did was never going to do them any favours, but it still feels like this Wanderers side has another gear to find. At the same time, strong performances from the likes of Sam Salter, Cory Bent, Zachary Fernandez, Eriks Santos, Jérémy Gagnon-Laparé and Andre Rampersad have provided hope that a core is there for the Wanderers to rely upon in big moments.

Benedict Rhodes: It’s hard not to think that had last year’s Player of the Year and Golden Boot winner João Morelli not gone down with a season-ending injury, HFX Wanderers might be in a different place right now. Sam Salter’s emergence as one of the better attackers in the CPL has been a welcome surprise, as has the breakout season of Zachary Fernandez at right-back, but like the other teams below the cutoff for the playoffs, the club hasn’t been consistent enough break into the top group just yet.

Charlie O’Connor-Clarke: The loss of Morelli was, of course, a crushing blow to the Wanderers this year, but perhaps more than anything it exposed how dependent they were on him in 2021. Halifax have created the fewest big chances in the league this year, with the second-fewest open play expected goals at just 8.29. Also concerning is their home form: they’ve been outscored 12-6 at the Wanderers Grounds in CPL play, and they’ve already conceded more goals in those six games than they did in all 10 at home last season. Positive signs have materialized, though: the midfield remains elite, between the ever-immense Rampersad and Gagnon-Laparé, who’s having a phenomenal year. Sam Salter might be the consistent goalscoring threat they desperately need, and Zach Fernandez might be a candidate for U-21 Player of the Year when all’s said and done. Still, Stephen Hart will want to see his side much more decisive and dangerous with the ball.

Kristian Jack: Some teams have lost more players to injury but no team has been impacted more by the loss of one player than Halifax with João Morelli. Without a true replacement for the Brazilian, it remains very difficult for them to create key goalscoring opportunities (scorers of one goal or less in 10 of 14 games so far). Andre Rampersad leads a strong midfield, Sam Salter has been a bright spot up front, a good cup run and the emergence of Aidan Daniels and Zachary Fernandez have all given the reasons for a packed Wanderers Grounds to cheer but their usual home advantage has also started to dwindle in 2022.

Mitchell Tierney: When they are at their best, Halifax is a defensively resilient side, who are nearly impossible to beat at home. Unfortunately, they often haven’t been at their best in the first half of this season. They still haven’t won back-to-back matches, and have conceded the third-most goals in the league. Halifax has one of the best midfields in the league, but perhaps not enough consistent performers surrounding those players.

Alexandre Gangué-Ruzic: Just three points out of the playoffs, the Wanderers are far from out of it, especially considering that they have a whole backlog of home games to come. Their home record has been unusually poor, which is a worry, but you have to imagine that changes soon, potentially fuelling a late push. Otherwise, look for Salter to continue his push to try and be the third consecutive (and different) Wanderers CPL Golden Boot winner, while tightening the defence that once used to strike fear into their opponents. Given the solidity of their midfield, that seems like a fair task.

Benedict Rhodes: HFX Wanderers have one of the best midfields in the country, with Andre Rampersad and Jérémy Gagnon-Laparé two of the best around. Games can be lost if those two are having a rare off day, but they can’t win them on their own. HFX need more players to step up offensively – more goals are needed if they’re going to turn some of these losses into the draws and wins they have sometimes deserved.

Charlie O’Connor-Clarke: There’s no reason to believe the Wanderers can’t go on a run and find their way into the top four, if they can just put the ball in the net more consistently in open play. Salter has done well to shoulder some of that burden, but he needs help from, ideally, Akeem Garcia, or alternatively the likes of Mour Samb, Alex Marshall, or Cory Bent (if he can get healthy). There’s a good foundation in place with the defence and midfield, but the final third is where it needs to start clicking. They’ve shown that they have the capacity to play on the front foot against good teams — think their 3-0 win at Pacific, or even their Canadian Championship tie against Toronto FC — but they have to get back to the fierce home team they were in 2019 and 2021. The pack at the top isn’t that far ahead, but the gap can very quickly widen.

Kristian Jack: Halifax still have eight home games left and must find a way to be dominant again at home if they are to make a run at the playoffs. With the fewest amount of draws in the league it is important they win matches they play well in and be more ruthless in front of goal when chances are created. They have scored first only three times and won all three, for example. The team’s average points per game (around 1.2) and goals per game (just less than one) have been similar for the past season and a half now and will need a big improvement if they are to make a late push for the playoffs.

Mitchell Tierney: Consistency is key to the second half of the season for Halifax, as it is something they haven’t been able to find so far this year. They have had some great results this season, like their historic 3-0 win over Pacific at Starlight Stadium on June 25, or a 3-1 win over FC Edmonton in their home opener, but they weren’t able to really build on either of those performances. A league-worst home record has to change in a hurry as well.