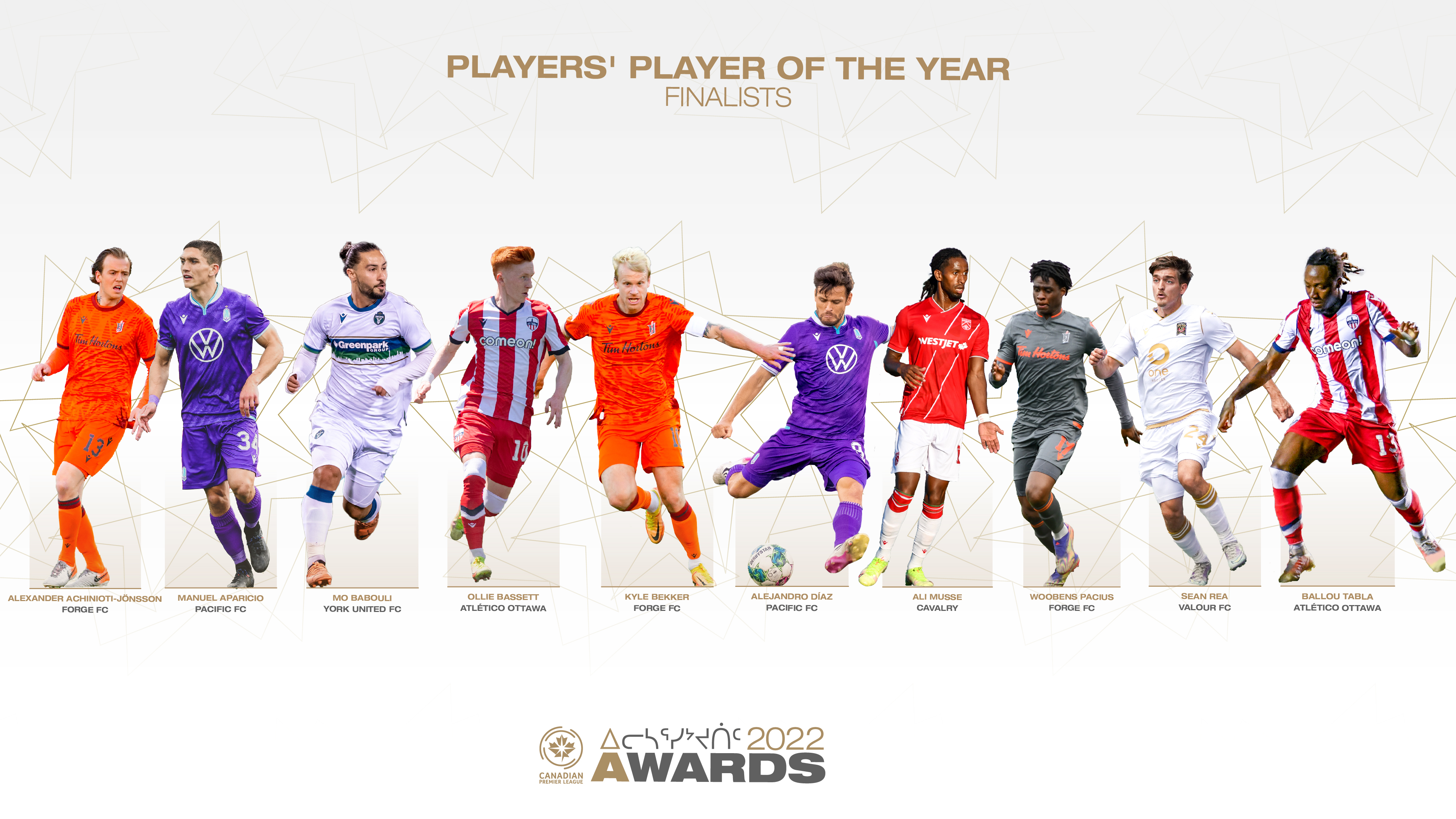 Together with all of the players and clubs, the Canadian Premier League is incredibly proud to introduce an award for the best player of the 2022 season, as voted by their peers. The inaugural Players’ Player of the Year ensures no greater honour is given to the winner, who will be recognized by his fellow professionals as the most outstanding and consistent performer from the 2022 regular season.

Voting for the award took place in early October and a total of 180 players submitted their top three players, with five points awarded to their number one choice, three points for their second selection and one point for whomever they picked third. Any player who played in the league during the 2022 season was eligible to vote and be included for consideration by the players. Players were not allowed to vote for anyone from their own team.

In total, 45 players received votes during a process that saw players meet face-to-face with members of the Canadian Premier League office to give their choices. The results of the vote and who won the award will be revealed during Friday evening’s 2022 Canadian Premier League awards show at 7 p.m. in Ottawa, which fans can watch live via OneSoccer’s YouTube channel.

The Players’ Player of the Year will be awarded the Muskox, a sculpture carved by Inuit artist Ruben Komangapik. The Muskox represents leadership, organization and defence of its most vulnerable members.

The following ten players, in alphabetical order, were voted in the top ten and are named as finalists for the Canadian Premier League’s Players’ Player of the Year.

Alex Achinioti-Jönsson entered the year well-known as one of the best defensive midfielders in the CPL, but this season he elevated his game in another position: at centre-back. The 26-year-old native of Hittarp, Sweden played his fourth season at Forge FC almost entirely in the backline with usual starter Daniel Krutzen injured, and Achinioti-Jönsson was exceptional. He was good enough, in fact, that he was also nominated for Defender of the Year despite it not being his natural position.

He played 27 out of 28 games for a Forge side that conceded fewer goals than any other CPL team this year, and he was the consistent rock in a lineup that was constantly changing due to injuries. It’s not hard to argue that Achinioti-Jönsson was Forge’s most valuable and best player in 2022, considering the heavy minutes he played and how instrumental he was to ensuring they finished second in the table.

Achinioti-Jönsson was one of the league’s very best distributors of the ball this year, making more successful passes than anybody else with 1,996 and helping spring innumerable attacking sequences for Forge by either delivering the ball upfield or stepping forward himself.

The towering Swede was also strong in the air and good in one-on-one defensive situations — plus, he scored Forge’s first goal of the campaign, a header in their season-opening loss to Pacific FC.

Manny Aparicio was a machine for Pacific this season, playing primarily as an attacking midfielder for the defending champs and helping pull the strings for them in attack. The Toronto native is one of the hardest-working players in the CPL both on and off the ball, and he was the engine of Pacific’s midfield this season.

That Aparicio made it onto this list despite playing just 17 regular season games (and a hair over 50 per cent of his team’s minutes) is a testament to just how important he was to Pacific this year. With Aparicio on the pitch, the Tridents had 11 wins, three draws, and three losses this year; without him, they won just twice, drawing four and losing five.

Aparicio was named to the Gatorade Team of the Week six times in 2022, and he was named the CPL’s Player of the Week for the sixth week of the year. He finished second in the league for passes into the final third per 90 minutes with 11.52 — first among midfielders — and his 6.95 recoveries per 90 was fifth among outfield players. Aparicio continued to be one of the best creative players in the league, and his work rate off the ball helped ensure Pacific didn’t spend much time without it.

Bassett moved to the nation’s capital after winning the CPL title with Pacific FC last season, and he had a breakout year. The English-born midfielder appeared in all but one games for Atlético Ottawa this year, carving out a spot for himself in central midfield after bouncing around various positions the year before.

The former Aston Villa academy player led the regular season champions with eight goals, also contributing two assists and generally running Ottawa’s attack from the centre of the pitch. The 24-year-old was first in the league among midfielders with 138 penalty area entries, and he won possession 175 times (third in the league), demonstrating his defensive effort.

Bassett was also always a threat from set-pieces, with 18 chances created (second-most in the CPL) as well as an Olimpico goal scored against Valour to help his side surge to the top of the table. The Northern Ireland youth international was the driving force behind Ottawa’s regular season title campaign.

Considering his impact since rejoining the league, it is incredible to think that Mo Babouli played just eight matches for York United in 2022.

During that time, however, he was incredibly dominant. Babouli scored five goals and added two assists in just 654 minutes of action. He was named to the Gatorade Team of the Week four times, was Player of the Week for Week 22, and the league’s Player of the Month for September.

Operating largely as a number 1o for York, Babouli was allowed the freedom to dictate the Nine Stripes’ attack. His quality on the ball in terms of dribbling, passing, movement in and around the box, and finishing instantly transformed the York attack and made it one of the most dangerous in the league during the final stretch of the season.

The Forge captain continues to be one of the most consistently dominant performers in the league’s history. His fourth year in the Canadian Premier League saw him score three goals and add five assists as Forge finished top two in the league table for a fourth straight campaign.

At 32, Bekker remains the heart of Forge’s midfield. He was again among the league leaders this year in passes made, big chances created, and recoveries, and completed 83.9 per cent of his passes. The 2020 Canadian Premier League Player of the Year was included in five Gatorade Teams of the Week this season.

This year Bekker also reached a significant league milestone, becoming first player to reach 100 appearances for a Canadian Premier League side. On and off the pitch, Bekker’s leadership continues to be a key part of why Forge have been the league’s most successful team.

Despite playing just 18 matches before being transferred to Norwegian side Sogndal on August 10, Alejandro Díaz won the league’s Golden Boot for 2022.

He had 13 goals, tied for the second-most a CPL player has put up in a single season in the league’s history. That incredibly prolific finishing ability has continued since his move to Norway, as the Mexican youth international has put up five goals in 10 appearances with Sogndal.

Díaz showed an incredible ability this past season for getting into dangerous positions and being able to finish off chances efficiently and under pressure without needing extra touches or space. He led the league in big chances with 17.

Musse proved to be the key cog in the Cavalry FC attack this past season. The 26-year-old Somalian international scored seven goals and added three assists during an excellent 2022 campaign.

His offensive instinct and dribbling ability allowed him to lead the league in shot attempts and shots on target. He was also among the league leaders in successful corners and crosses, developing a strong partnership with fellow attacker Joe Mason. His proficiency in dead-ball situations as well made him an all-round attacking threat.

That threat came from any distance as well. Musse tied Atlético Ottawa midfielder, and fellow Players’ Player of the Year finalist, Ollie Bassett, for most goals outside of the box in 2022 with three.

The Terrebonne, Quebec native finished fourth in the league with 10 goals over 27 games, leading a Forge team that put the ball in the net a league-best 47 times. Pacius went on an outrageous run of form in July and August which saw him score seven goals in six games, but he was a productive striker throughout the year for Forge.

After Pacius signed for Forge in August 2021 he immediately carved out a place for himself in the team, scoring six goals in his first professional campaign (or at least, half of one) last year. This season, though, the former CF Montréal academy man has found a new level to his game as a potent finisher with good instincts.

His hold-up play has improved, as has his ability to pop up in the right spot in the penalty area to finish off build-up moves. Although much of Forge’s attacking has been done by committee this year, Pacius is consistently their top finisher and undoubtedly one of the most dangerous weapons in the entire league.

At 21 years old, Pacius is already looking like a solid professional goalscorer, with plenty of growth still to come.

One of the brightest young players in the CPL, Rea shone at Valour this season on loan from MLS side CF Montréal. The 20-year-old set a league record with his nine assists this season, scoring five goals of his own in the process.

Rea was also nominated for U-21 Canadian Player of the Year after a remarkable season in Winnipeg, which saw him lead his team with 2,273 minutes played (appearing in 27 out of 28 matches for Valour). Rea was one of the most dangerous attacking players in the league, helping his side remain in the top-four race until the final month of the season.

Rea’s 62 successful crosses and 71 chances created were both more than anybody else in the CPL — and second place in chances created had just 43, with Rea out in front by an incredible margin. He scored several timely goals for his side, including one highlight-reel strike against York United in the dying minutes to secure a 1-0 win for the Winnipeg club.

The Montréal native was named the CPL’s Player of the Month for August, and he appeared in the Gatorade Team of the Week six times.

One of the most highly-touted offseason newcomers to the CPL, Tabla did not disappoint in his first season at Atlético Ottawa. The 23-year-old attacker, formerly of CF Montréal and FC Barcelona B, appeared in all but one of Ottawa’s games in 2022, recording 2,121 minutes.

The Ivory Coast-born Canadian international finished with six goals and four assists in the regular season, and he scored perhaps the best goal of the year in a crucial victory over Cavalry FC:

A moment of pure magic ??

Who else has just been watching this stunning goal from @atletiOttawa’s Ballou Tabla on repeat since last night? ??

Tabla was the CPL’s Player of the Week twice this year, and he appeared in the Gatorade Team of the Week six times. His role at the front of Ottawa’s lineup was pivotal to his side’s run to the regular season title.