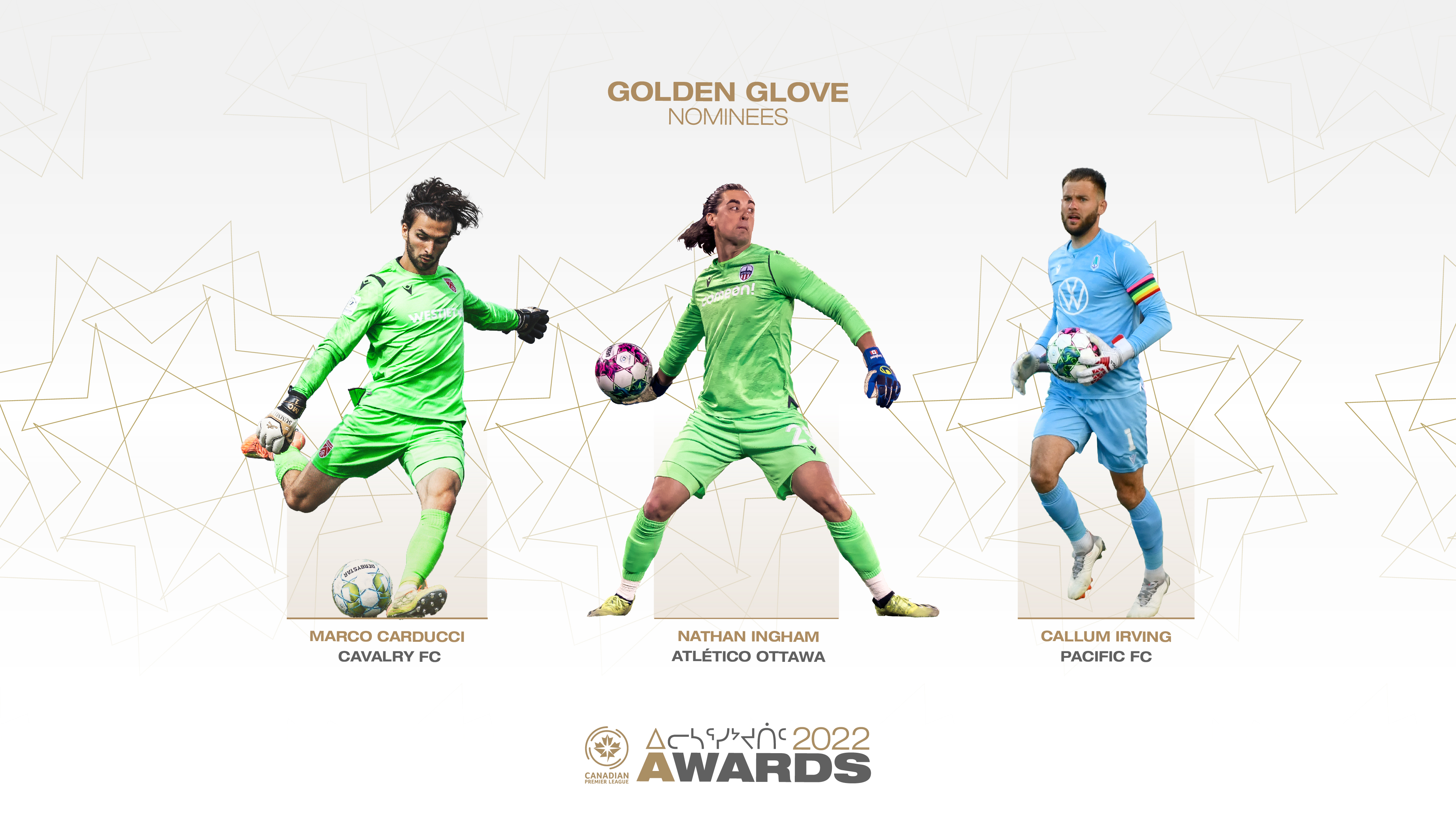 The Canadian Premier League announced its nominees for its 2022 Golden Glove award on Thursday afternoon.

This award is given to the best goalkeeper in the Canadian Premier League for the 2022 regular season.

The three nominees were determined by the CPL head office, with the winner voted on by select media members across Canada. The goalkeepers selected were evaluated exclusively on their play in the 2022 CPL regular season, with voting commencing immediately following the campaign’s Oct. 9 conclusion.

The Golden Glove winner is awarded a sculpture of a Canadian Inuit Dog, crafted by Inuit artist Kellypalik Etidloie of Cape Dorset, Nunavut.

Here are the three nominees for this year’s award:

Pacific FC will begin their CPL title defence on Saturday, and a big reason for their playoff qualification has been the play of veteran 29-year-old goalkeeper Callum Irving.

The ever-reliable Irving played the second-most minutes (2340) and matches (26) of any goalkeeper in the league this season, behind only Forge’s Triston Henry. This is especially impressive considering Pacific’s intense travel schedule in 2022 as a result of playing in Concacaf League.

One of the league’s premier shot-stoppers, he tied Ottawa’s Nathan Ingham for the CPL league lead in saves this season with 63. Irving also excels at being quick out of his area to cut out opposition chances, leading all goalkeepers in recoveries (232) and punches (12).

Irving made four appearances in the Canadian Premier League’s team of the week, and he and Marco Carducci were the only goalkeepers to be awarded player of the week this season. Irving was also a finalist for the 2020 Golden Glove award.

Despite the loss, @Pacificfccpl goalkeeper @CallumIrving made several BIG saves, including this double save which earned him the @AllstateCanada Save of the Match 🧤 #CanPL | 📺: @onesoccer pic.twitter.com/7yX9s8MoEq

Both on and off the pitch, Marco Carducci continues to be an exemplary player for the Canadian Premier League. In the preseason of this year, Carducci was diagnosed with testicular cancer, which he overcame and was able to start the club’s home opener on May 1.

Carducci is a complete goalkeeper, one who is excellent with the ball at his feet (second in passes completed among goalkeepers) and 74.80 percent success rate, the highest among the three keepers nominated for this year’s Golden Glove. He tied Henry for the league lead in clean sheets this season with 10 but did so in three fewer matches played.

The Cavalry keeper was consistently solid throughout the season, allowing just 25 goals in 24 matches played this season. He also made four appearances in the league’s team of the week this season.

The 26-year-old won the inaugural Golden Glove award back in 2019, the only nominee this year to have previously won, and was a finalist last year.

An absolutely RIDICULOUS point-blank stop from @mcarducci9 to preserve the win for @CPLCavalryFC earned the @AllstateCanada Save of the Match 🧤#CanPL | 📺: @onesoccer pic.twitter.com/NoVKceHLb3

Ottawa’s worst to first run to a 2022 regular season title was in big part due to the acquisition of experienced goalkeeper Nathan Ingham.

Ingham helped Ottawa to the second-best defensive record in the Canadian Premier League, picking up eight clean sheets himself in the process. He shared the league lead in saves made with Pacific’s Irving, making 63.

The 29-year-old was also remarkably consistent this season, allowing more than two goals against in a match only twice all season. He allowed just one or fewer on 21 occasions this season.

Ingham was a finalist for the award back in the league’s inaugural 2019 season, back when he played for York. He made three CPL team of the week appearances this season.

A double save in Ottawa 🛑