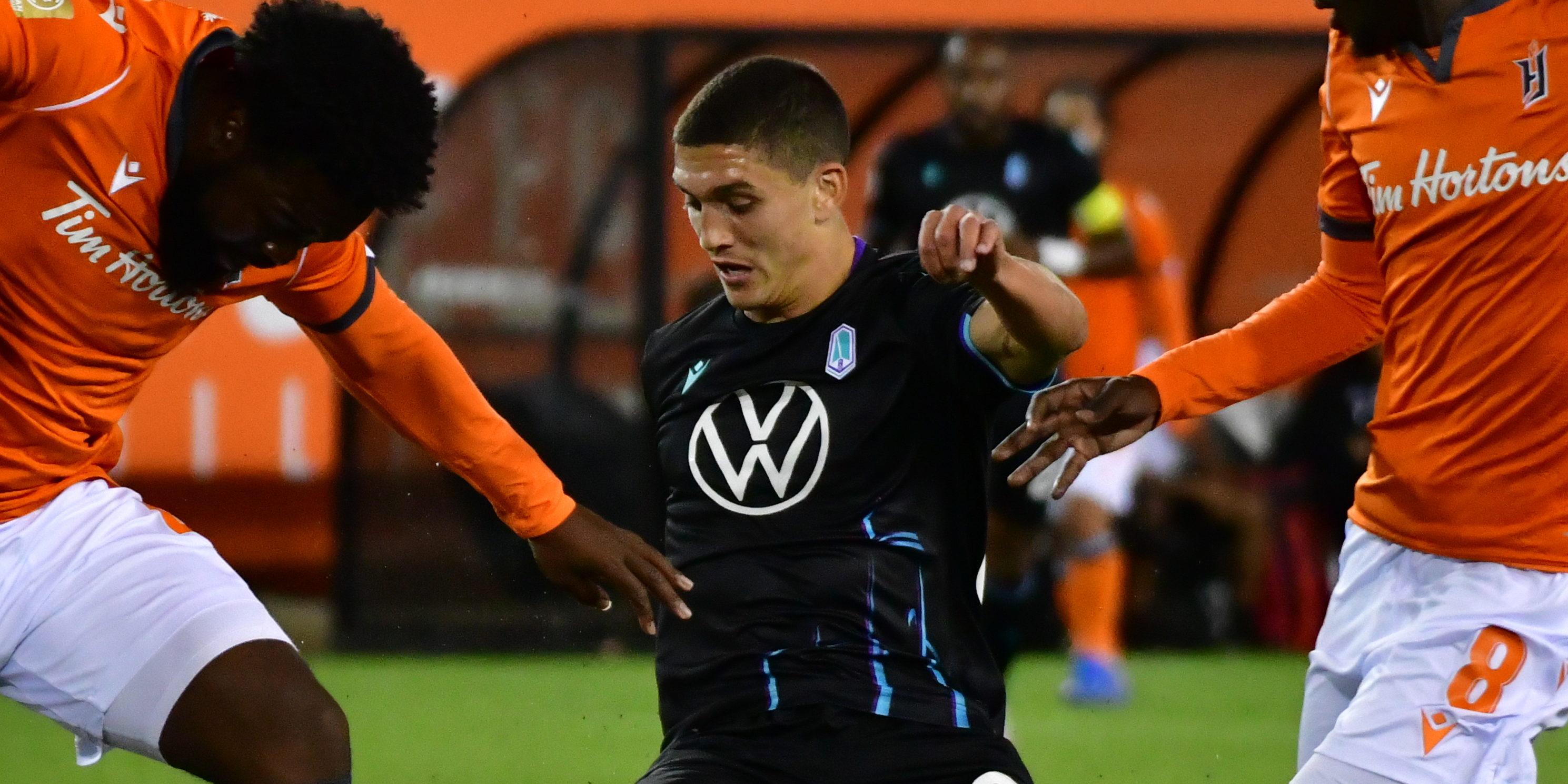 The 2021 Canadian Premier League Final is on Sunday, as Forge FC and Pacific FC square off at Tim Hortons Field. The tactical matchup between Forge’s Bobby Smyrniotis and Pacific’s Pa-Modou Kah will be a chess match, as two exciting teams go head-to-head.

Both sides have strong midfields, and the match could be won or lost in the centre of the park. One battle in particular stands out in midfield — Forge’s Kyle Bekker versus Pacific’s Manny Aparicio, two of the league’s premier players and a duo both capped by the Canadian men’s national team.

In the orange corner, Forge FC possess a stalwart from their first three seasons, and their club captain. Bekker is crucial to everything his team does and has been since the very first CPL match, which was against Aparicio’s former club York9 FC — now York United.

The 31-year-old was a finalist for the league’s Player of the Year award in both 2019 and 2020, winning the honour last year.

He lost to teammate Tristan Borges in 2019, who will also likely start on Sunday for the Hammers. The duo were electric in the league’s inaugural season.

One of Bekker’s biggest advantages is his ability to play deadly balls in from set pieces, and he’s created important goals from corner kicks in two of Forge’s last three matches. Against local rivals York United, Bekker curled a dangerous corner to the near post. It was redirected by Josh Navarro, before striking York’s Noah Verhoeven and falling into the back of the net.

It’s Joshua Navarro again as he gets his head on the cross #CanPL l 📺: @onesoccer
pic.twitter.com/k2fU2sKgBM

He also created a similar goal a few days later, again involving Navarro, in Concacaf League action. This goal started a late comeback for the Hammers, as they earned at 2-2 draw at home.

Joshua Navarro heads home the corner to bring his side within one#SCL21 l 📺: @onesoccer
pic.twitter.com/NXT0f88b9r

Forge drew 0-0 in Honduras on Wednesday, losing the semi-final of that competition on away goals. Bekker spoke after the match about how motivated Forge will be heading into their third consecutive CPL final. A motivated Forge, and a motivated Kyle Bekker, will strike fear into any opponent.

He’s also an incredibly hard worker off the ball, and an important leader in the middle of the pitch. A lot of what Forge does goes through their captain, and he’s capable of creating chances like few players in the CPL can.

One of the players up against Bekker in midfield will be Manny Aparicio.

In his first season with the Tridents after joining from York in the offseason, Aparicio has become one of the first names on Pa-Modou Kah’s teamsheet. The 26-year-old was the first captain in York history, and brought some of those leadership qualities with him to Langford.

He’s an engine in midfield for Pacific, and never stops running. Against Cavalry FC in their semi-final a couple of weeks ago, Aparicio put in arguably one of the best individual performances in CPL history.

He was near-flawless defensively, and the best player on the pitch on the attacking side of things. He played an important role in both of Pacific’s goals, especially the opening goal, heading the ball across the box for Terran Campbell to give his team the lead.

He seems to thrive in the big matches, and bring the best out of the players around him. He was also excellent in Pacific’s famous Canadian Championship victory over the Vancouver Whitecaps in the summer, and scored an important goal against the MLS side. Few, if any, players will work harder than Aparicio, especially in matches like this.

If Pacific are going to end Forge’s dominance and pick up their first North Star Shield on Sunday, Aparicio will be a big part of it, and will be crucial in linking the defence with Pacific’s strong attack.

Like Bekker, he’s no slouch from a dead ball either. He’s scored a few direct free kicks, and can strike a ball with the best of them.

The @York9FC captain channels one of the great free-kick takers in Canadian sport with an inch-perfect replica of those signature strikes!

Both also have international experience with the Canadian men’s national team. Bekker made 18 appearances for the senior side been 2013 and 2017.

Aparicio’s lone appearance for the national team came in October 2014, a 1-0 defeat to Columbia with a Canada squad featuring a number of future CPL players — David Edgar, Nik Ledgerwood and Jérémy Gagnon-Laparé among them.

Sunday’s match will be won in the midfield. Both of these players should rise to the occasion, making for one of the best midfield matchups of the season, in the biggest game of the season.