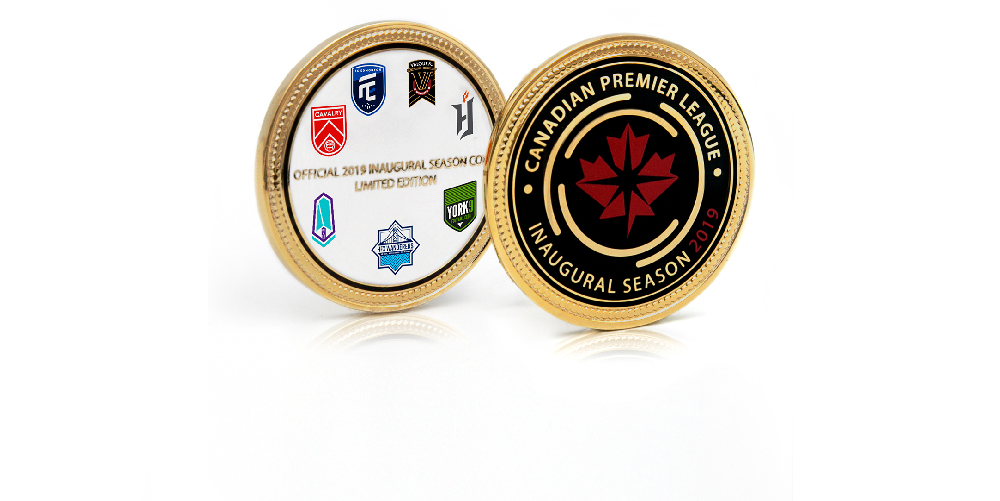 Soccer fans can own a piece of Canadian soccer history by entering the lottery system to purchase 1 of 100 numbered commemorative coins being made available to the general public for sale as a memento to be treasured and to mark the 2019 inaugural Canadian Premier League season. The first season has brought professional soccer across this country, and in commemoration of the journey and to champion our supporters, the Canadian Premier League is proud to introduce the official league coin.

The coin, gold, black, and red in colour, features the Canadian Premier logo in red on one side and on the other, the crests of all seven founding clubs (HFX Wanderers, Forge FC, York9 FC, Valour FC, Cavalry FC, FC Edmonton and Pacific FC).

This is the same coin used by the referees pre-match during the coin toss ceremony.

One Hundred of these limited-edition coins – of which 500 are in circulation in total –  will be made available to consumers to purchase via a lottery system that will open on Friday, August 2nd at 11am EST. Anyone interested in purchasing one of these coins will be required to register through the Centre Circle App, the official app of the Canadian Premier League. The lottery will close on August 6th at 11:59PM and winners will be contacted via email with a link to purchase and will have 48 hours to purchase their coin or it will be re-allocated to the next person. The lottery is one entry per person.

Supporters and fans can also enter for a chance to win one of these commemorative coins and participate in a pre-match coin toss at a home match in all seven of our club cities. This unique experience will run as an in-app contest in Centre Circle.

Download the app and check back for more details about this unique, once-in-a-lifetime opportunity.

Rules and restrictions may apply. Click here to read the official contest rules and regulations.