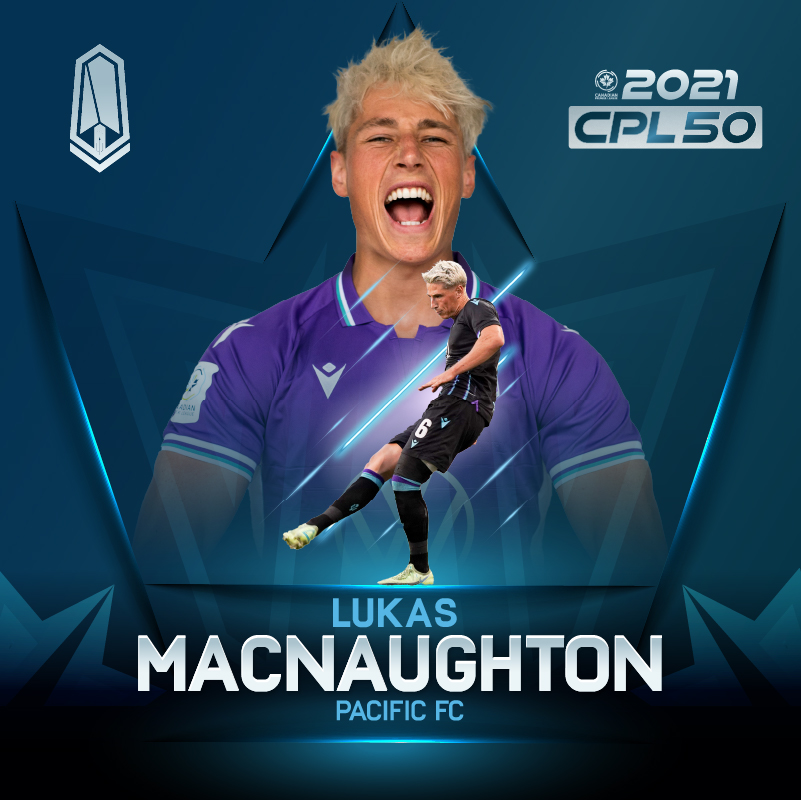 Welcome to CPL50, a series where we’ll reveal the top 50 players from the 2021 Canadian Premier League regular season, as voted on by a panel of coaches from all eight teams and media from OneSoccer and CanPL.ca.

For more information on the voting process and method, click here.

The top 10 of CPL50 begins with one of the league’s most talented defenders, in Pacific FC centre-back Lukas MacNaughton.

This past season was MacNaughton’s third on Vancouver Island, but this year he truly broke out as one of the best at his position in the entire league. The 26-year-old played every minute in all but four of Pacific’s games this year (two of them due to suspension), finishing third in the CPL with 2,340 total minutes played.

MacNaughton took full command of Pacific’s defence this year, showing incredible leadership on and off the field and establishing a constant presence at the back for the club as they dealt with a litany of injuries elsewhere. He was a force to be reckoned with defensively, both in the air and on the ground — he was tied only with Cavalry’s Karifa Yao for aerial battles among defenders (and he won more of them, with an astonishing 72.4% success rate), and he was fifth in the league in recoveries (165).

With the ball, MacNaughton was even more impactful, displaying tremendous confidence in his ability to push forward as a defender. He had more touches of the ball than anybody else in the league (2,155), and he led the CPL in passes completed in the defensive third (752). Amazingly, he also finished second in the league in passes in the middle third, with 856, in part due to his tendency to push into midfield.

He also contributed some important elements to the attack, particularly his ability on set-pieces, and he showed at least once in 2021 that he can strike a ball pretty well, too:

Strikers can't get job done? Leave it to Lukas MacNaughton!

Had MacNaughton not been so good this year, Pacific might not have won the CPL championship. Though he heartbreakingly missed the semi-final due to suspension, he was one of the best players on the pitch in the final against Forge, putting in the sparkling defensive performance his side had come to expect this year.

The 26-year-old born in New York has been at Pacific for all three seasons in the CPL. He joined the club on his first professional contract after several years in League1 Ontario with Alliance United and North Toronto Nitros, as well as an excellent U SPORTS career with the University of Toronto. He played for Canada at the Universiade Games in both 2015 and 2017, during his time with U of T.

The rest of the CPL50 countdown is available here. Five more players will be revealed per day until December 22.