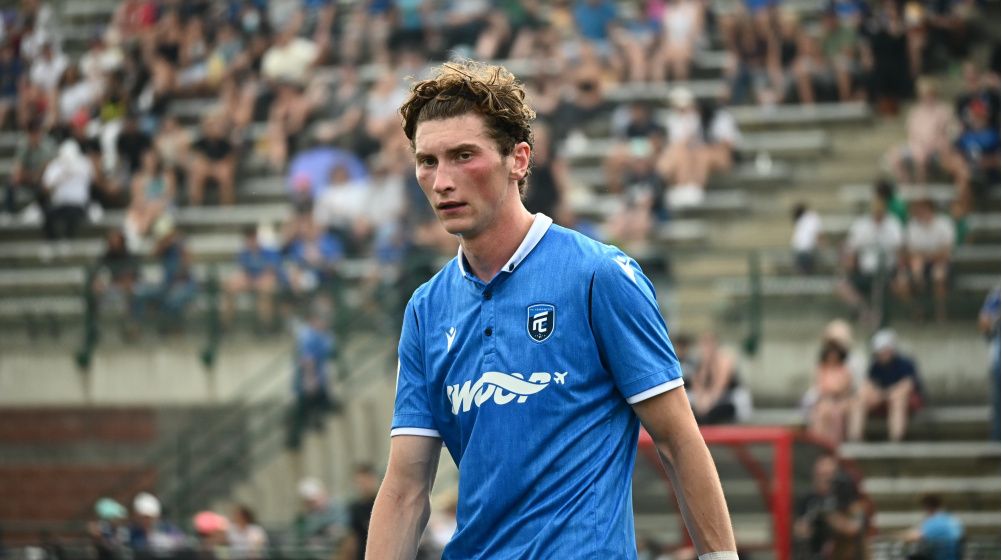 ‘They play the kind of football I want to be a part of’: Ongaro looks to bring goals to Pacific FC
2022-11-15
by
Mitchell Tierney, Digital Content Producer (@mitchelltierney)
News

This past year for Easton Ongaro was, in his words, “a bit of a rollercoaster”.

He started 2022 with FC UTA Arad in Romania, but appeared only sparingly, playing six matches and scoring just once while navigating what he called “an unstable environment.” He would gain some stability when he joined Vancouver Whitecaps FC 2 of MLS Next Pro in July, where he played seven matches, scoring three times, and also making an appearance for the first team. But joining a new club midseason presented some difficulties of its own.

“It was definitely a challenge for me, where I learned a lot and grew as a person and a player,” Ongaro told Kristian Jack of CanPL.ca.

On Tuesday, it was announced that Ongaro will be staying on the west coast for the 2022 season, returning to the Canadian Premier League to join Pacific FC. The former FC Edmonton striker joins the Vancouver Island outfit on a multi-year deal.

“The way this past year has gone, with me bouncing around, it was really an attractive option where I could just go there, have some security, have an opportunity to really prove myself again and play a lot of games and be that number nine that I want to be,” said Ongaro. “They are a great team, in a great city, and from the outside looking in they do things right. They play the kind of football I want to be a part of. I’m just excited to go there and be a part of it.”

Pacific are getting a player among the most lethal in CPL history, as Ongaro sits third all-time — behind only former Pacific striker Alejandro Diaz and Forge’s Terran Campbell — in goals scored with 25. In his last CPL season, 2021, he finished as Golden Boot runner-up behind João Morelli of HFX Wanderers with 12 goals. He also finished fourth in scoring during the league’s inaugural season in 2019.

Speaking of Diaz, those will be the ‘Golden’ boots that Ongaro is expected to fill this upcoming season. Despite playing just 18 games, Diaz led the league in scoring in 2022 with 13 goals before being transferred to Sogndal in Norway.

His absence was unquestionably felt by Pacific. After scoring 28 goals in the 18 matches in which Diaz was in the lineup, they scored just 8 in their final 10 regular season matches. Pacific scored more than a single goal just once in that time frame, a could only manage one more during two semifinal playoff legs against Atlético Ottawa, despite 11 combined shots on target.

Bringing in a player like Ongaro, who has a very similar profile to the departed Diaz, could go a long way toward keeping Pacific in contention for 2023.

“He played half the season and won Golden Boot, that is incredible,” said Ongaro of Diaz. “You look at the team he had around him, and his ability to get into the right places and finish chances. I think that’s hopefully something I will be able to replicate.”

It is Pacific’s winning culture, being the only side other than Forge FC to lift a North Star Shield, that was a key draw to the Island for the 24-year-old. Despite playing three seasons in the league, Ongaro has yet to make a playoff appearance, something Pacific have done in both of the last two seasons.

“One of the most important things for the next time period for me, my next contract, is being in a team where we are expected to win every game, and we are going in to fight for that. So far in my career, I haven’t really had that. I have been on a lot of, it’s unfortunate to say, losing teams. It is not easy as a professional to go home, week in and week out after loses and that is why I feel like I need to be winning matches, and Pacific is that place.”

If he can help Pacific FC to win matches, and continue to score goals the way he has in the past, Ongaro knows firsthand the sort of opportunities that the CPL can create for a player. Having had a small taste of MLS action this past year, it is a goal of Ongaro’s to eventually get back to that level.

“I mean you look at this past year how many players have gotten transfers, callups, you look at Joel [Waterman] and James Pantemis, there are so many opportunities that are coming from this league,” said Ongaro. “From the start, it gave me an opportunity to become a professional. If it weren’t for the CPL, I have said it many times, I don’t think I would have ever been.”

Ongaro is incredibly excited about this latest opportunity within the league, with a Pacific FC club that he believes has the right vision to continue to build on its recent success.