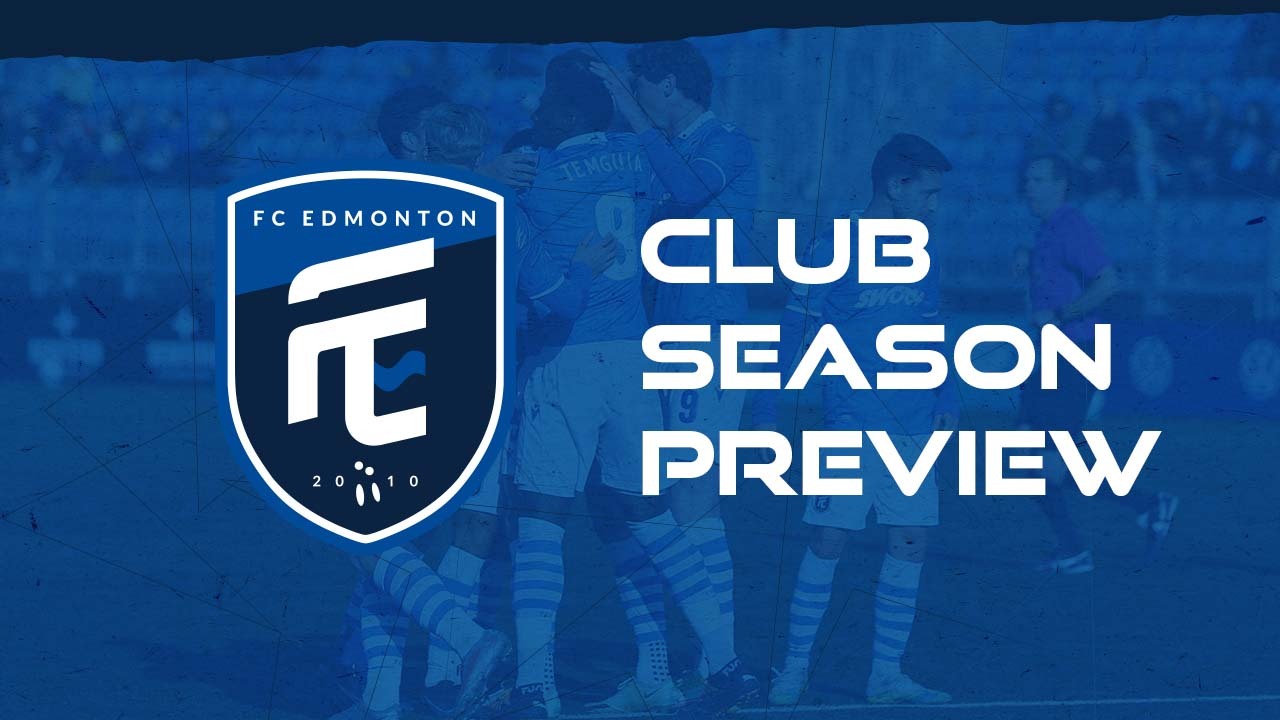 It’s going to be a difficult year in Edmonton. After the Canadian Premier League office took over the club’s operations amid a search for a new ownership group, it has been a mad scramble for head coach Alan Koch to put together a team and coaching staff before the season.

While it was difficult at times, the 2021 season was always supposed to be. A chance to rebuild with a new head coach and new players, Koch spoke all year about not focusing on the playoffs, but the desire to just improve every day and build the foundations for the team to thrive in the seasons to come. The difficulty of these past few months has forced The Eddies to scrap any kind of expectations or goals for the 2022 season. This year the process will start all over again, as the club just tries to show a good account of themselves and start building itself up again.

Only two players from that 2021 Eddies team have returned on a permanent basis – fullback T-Boy Fayia and goalkeeper Darlington Murasiranwa. Most of their roster is in on loan from other Canadian clubs, including another trio of 2021 players, midfielders Shamit Shome and Azriel Gonzalez, and attacker Tobias Warschewski. Shome is on loan from Forge, while the other two are back with the club via York United.

Koch hopes that having a few familiar faces will help him build the club culture that seemed to be coming together by the time 2021 was all said and done, and the players seem to have bought in.

“It was difficult for me to see what the club was going through first of all, I had to take a step back and see what was best for me, my family, my entire situation,” Shome told CanPL.ca. “I started training with the team a week early to get a vibe for how the team is looking. I can honestly say that I’m confident in the team that we have, regardless of the situation and whatnot — and if I wasn’t confident in it I wouldn’t be here this year.”

There are no expectations for this FC Edmonton team, their always-straightforward head coach says so himself. The plan is to just take it week by week and see what his players can do.

RELATED: Shome, FC Edmonton look to ‘build from the ground up’ with fresh start for 2022 || CanPL 20 in 10: FC Edmonton head coach Alan Koch

FC Edmonton’s roster has seen a lot of turnover. The only two players from 2021 returning to the club on a permanent basis are fullback T-Boy Fayia and goalkeeper Darlington Murasiranwa. Also returning to the club are Azriel Gonzalez and Tobias Warschewski on loan from York United, as well as Shamit Shome on loan from Forge FC. Loans are a big part of FC Edmonton’s roster this season, as they have also brought in Julian Ulbricht and Felix N’sa from York, Andreas Vaikla and Luke Singh from Toronto FC and a trio of young Canadians from HFX Wanderers.

Nyal Higgins and Masta Kacher have also joined the club from elsewhere in the league, moving from Atletico Ottawa and Valour FC, respectively, while former Eddies loanee left back Terique Mohammed joins the club from Dundalk and a loan stint with York United.

Retiring after the 2021 season were goalkeeper Connor James and defender Allan Zebie — two players who had been with the club for its first three seasons in the CPL, but involved with the club in its NASL days. Zebie had spent his entire career with the Eddies, first playing in the youth setup before making his debut for the first team in 2015.

Several other key players left the club, including the CPL’s all-time leading goalscorer Easton Ongaro to Romanian club UTA Arad, Canadian international centre-back Amer Didic to Pacific FC, and right back Fraser Aird to Cavalry FC. All but two players — Fayia and Murasiranwa — left at the end of the season.

FC Edmonton’s season gets underway with two home games in a row at Clarke Stadium. They open the season against Valour FC on Sunday, April 10, before York United visit on April 15. They then hit the road to take on Forge FC at Tim Hortons Field the following weekend.

They will host Cavalry FC for the first Al Classico of the year on May 6, and will also host their rivals on September 17. The two away games against Cavalry take place on June 26 and July 30.

FC Edmonton’s defensive unit will have a strong Toronto FC feel to it. Estonian goalkeeper Andreas Vaikla joins Edmonton on loan from Toronto FC II after playing 13 games for the club a year ago in USL League One. He’s joined on loan by centre-back Luke Singh from the TFC first team, who has played a few times for the club but was in desperate need of some playing time. Expected to start alongside him at centre-back is Nyal Higgins, who was drafted by TFC in the 2019 MLS draft. He spent a bit of time last year on loan with Atletico Ottawa, and returns to the CPL, this time in a more permanent way. On the left, former TFC II defender Terique Mohammed comes to the club after spending 2021 on loan at York United from League of Ireland club Dundalk. The 22-year-old has played for the Eddies before, playing five games on loan from Toronto in the 2020 CPL season.

At right back, T-Boy Fayia gets a chance to get more minutes under his belt after impressing in limited opportunities a season ago. 2022 will be a chance for several FC Edmonton players to play minutes that that might not have had if this circumstance didn’t arrive, so Fayia needs to take full advantage.

The club are very thin in central midfield, with Shamit Shome the only regular option there, and a guaranteed starter. Wesley Timóteo can also play in midfield but was brought in from HFX Wanderers as a fullback, while they’ll need to find someone to play in a more attacking midfield role if Shome is asked to play deeper. That attacking midfielder could be new recruit Masta Kacher — usually a wide player, but has played a handful of games in the CPL in a more central attacking role.

The two wingers for Koch will be the same as they were a year ago. With Azriel Gonzalez and Tobias Warschewski returning for another season — both on loan from York United — the FC Edmonton boss has a known commodity at those two positions. On the right, Warschewski led the CPL with seven assists a season ago, and added another four goals of his own, one of the side’s most important players. The 20-year-old American attacker Gonzalez joined Edmonton on loan from Tacoma Defiance in August of last season, and he returns again on loan in 2022, but this time from within the CPL. He can play on both wings but is expected to play on the left again, where he scored five goals and provided three assists a season ago.

With Easton Ongaro, the CPL’s all-time leading goalscorer, moving overseas in the offseason, the starting striker is expected to be Warschewski’s fellow German attacker Julian Ulbricht. The duo played together for a bit at Phönix Lübeck in Germany before coming to the CPL — with Warschewski signing in Edmonton and Ulbricht for York United. In 18 CPL games for the Nine Stripes, Ulbricht scored three goals and added three assists, also scoring twice in York’s Canadian Championship win over Master’s Futbol Academy.

The club won’t have much depth in 2022, but the potential starting lineup features some top quality players. Staying healthy, and managing the workloads of players when at all possible, will be important for Koch in 2022.

FC Edmonton newcomer Tobias Warschewski had an impressive debut season in the CPL in 2021 — scoring four goals and leading the league with seven assists. The German attacker is back for a second season, on loan from York United, and will be looking to build on his performances from a year ago.

Able to play on either wing or up top as a striker, Warschewski’s versatility will be important for an Edmonton team that doesn’t have as much depth as the other CPL teams. He’ll be able to move around in the starting lineup when called upon, or do so during games to mix things up.

He’s a powerful runner, and very good with the ball at his feet. He can play a cross into the box with the best of them in the CPL, and will be aiming for the head of compatriot and fellow York loanee Julian Ulbricht instead of that of Easton Ongaro in 2022. He’s also a good finisher, able to finish off a lot of difficult chances.

As one of only five players returning to FC Edmonton from a year ago — this time on loan from fellow CPL club York United — Warschewski will also be called upon as a leader for the large group of new players. He knows what Koch is trying to do on and off the pitch, and will be a big part of any success they have.

For more CPL season preview content, featuring our eight clubs each day leading up to the first round of matches, check out @CPLsoccer on social media or click here.