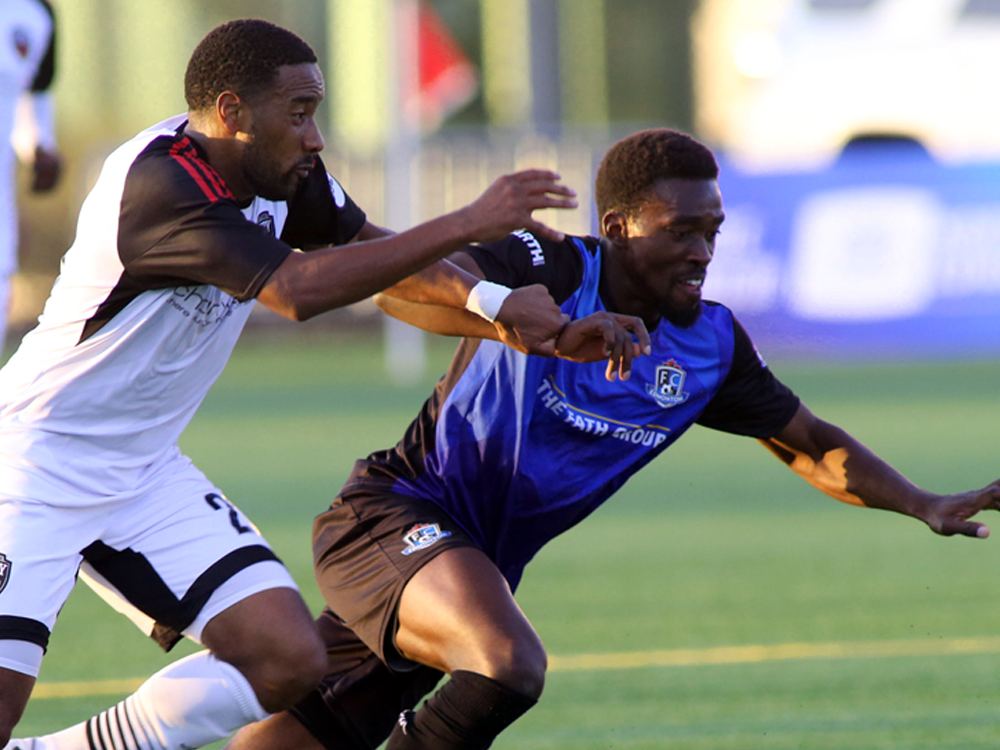 Ameobi, 30, played for FC Edmonton from 2014 through 2017, and ranks second all-time in goals (26) and third in appearances (107) across all competitions. He spent the 2018 season with FC Cincinnati of the United Soccer League.

“I can’t wait to get started,” said Ameobi. “It’s been exciting to see the team the coaching staff has put together, and I think it bodes well for us.”

“I don’t think I’ve met a better professional than Tomi Ameobi,” FC Edmonton head coach and Director of Soccer Operations Jeff Paulus said. “I believe that putting some good players around him is going to help him be outstanding.”

Mortotsi, 25, spent the 2013 and 2014 seasons with FC Edmonton, making 14 appearances across all competitions. After moving to Edmonton from Ghana as a child, the midfielder played his youth football with KC Trojans.

“It’s an honour and a privilege to be able to represent this city again,” said Mortotsi. “This is where my development as a player started, and I’m blessed to be able to put on this jersey again.”

“Edem, for me, is a player that is going to turn heads. Edem is one of the best passers of the football that I’ve ever seen,” said Paulus. “Edem is going to be a surprise player for everyone who doesn’t know him.”

“I learned everything I needed to know about North America from FC Edmonton and the city,” said Moses. “I look forward to reconnecting with the fans, building more relationships, and bringing home a championship.”

He loves the city, and the city certainly loved him when he was here,” said Paulus. “He’s a veteran player who is a great locker room guy, and we want to get our chemistry right.”

Soria, 29, is from Alicante, Spain, but has experience playing in North America, having spent time with Ottawa Fury in 2014 and Puerto Rico FC in 2016 and 2017. Soria spent the 2018 season playing for SD Formentera in Segundo Divisiόn B, the third tier of Spanish football.

“I am very excited to join FC Edmonton,” said Soria. “I have great memories from Canada. It is a country that I love and I wanted to come back one day. Now, I have the opportunity to join a new era in Canadian football and I am delighted to be part of it.”

“He’ll be the best passing defender in the CPL, and his ability with the ball, his technique, is fantastic,” Paulus said. “He’s a left-sided player, which are so difficult to find.”

Diouck, 24, was born in Senegal, but moved to Belgium at the age of 9, and has represented Belgium internationally at the youth level. Most recently, Diouck played for K.V.K. Tienen-Hageland in the Belgian Third Division.

“I’m looking forward to the start of the competition,” said Diouck. “I’m very excited to play for FC Edmonton and start a new chapter in my life. I want to win games to make the fans and my family in Belgium happy.”

“We’ve watched a lot of video on this player, and I see a powerful, quick striker who can play anywhere along the front line, and this gives us flexibility,” said Paulus.