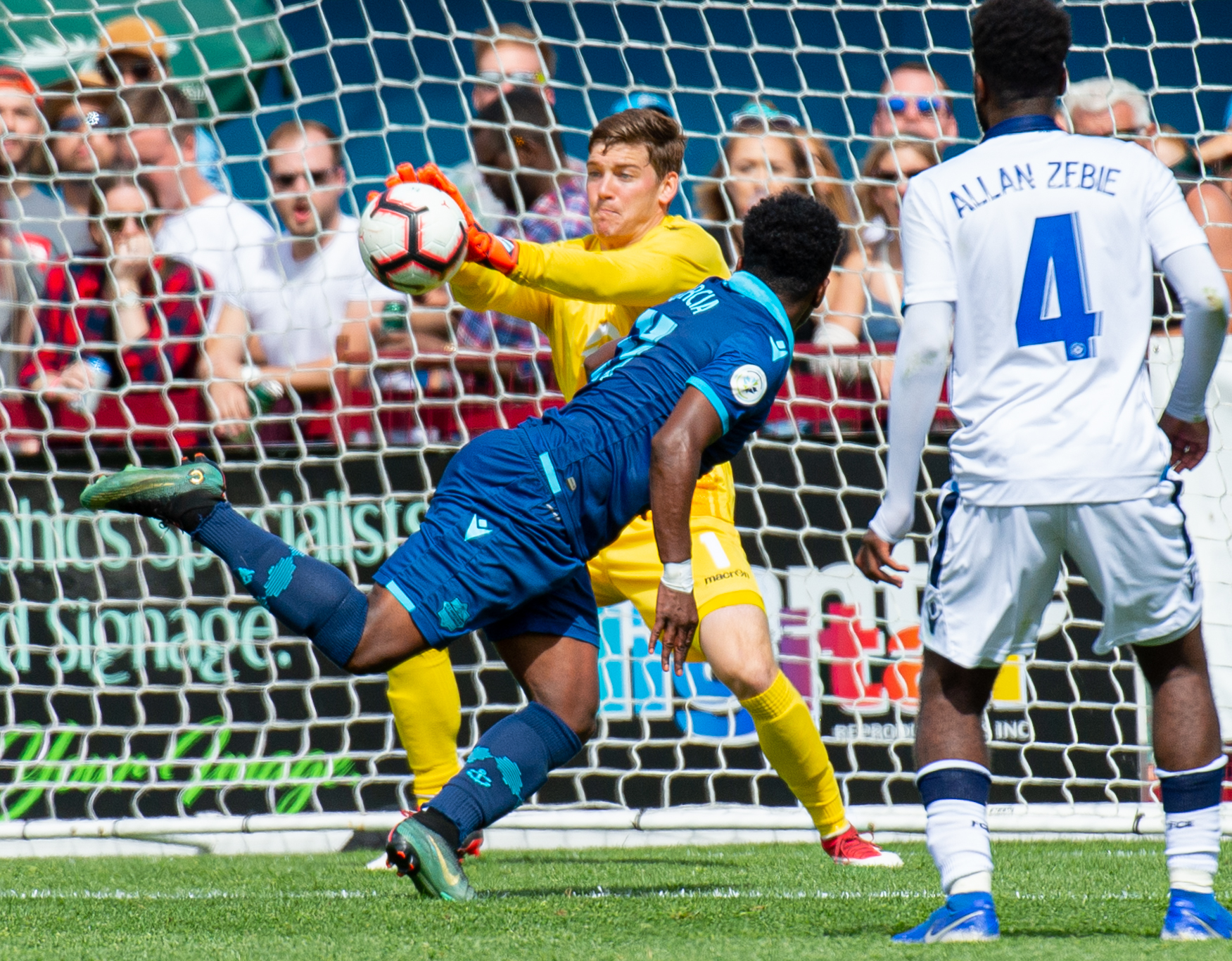 FC Edmonton’s Connor James is living a double life, between the posts and office cubicles.

The 2019 CPL Goalkeeper of the Year nominee kick-started his accounting career this off-season, marking two professional goals accomplished after he signed his first pro soccer contract with the Eddies before the 2019 campaign.

“It’s really funny how well it works out,” James told CanPL.ca about his second occupation, which he officially began after FCE’s regular-season finale last Fall. “I finished the CPL season in October, and hopped over to the firm right away.”

He later added: “Playing professional soccer was a dream come true, but really, it’s like I’m living two… not to say having a job in accounting is a dream.”

So, how does a rough-and-tumble footballer end up as an accountant?

James signed with FC Edmonton, his hometown club, after being selected seventh overall at the 2018 CPL-U SPORTS Draft from the University of Alberta Golden Bears. Even with a professional football career looming, James wasn’t ready to give up his other professional goal fresh out of school, especially after a job offer came from KPMG, one of Canada’s “big four” accounting firms.

“I told him right away that, if I was going to play for FC Edmonton, I’d be looking to work as well. I’ll never forget what he said; ‘Not only would I be accepting, I’d be happier if you did.'”

Good thing, too, considering the success he enjoyed on the field in 2019. Everything came together for James last year when he recorded seven clean sheets across 22 starts, establishing himself as one of the league’s most agile and quick-on-your-feet goalkeepers.

“Living the pro athlete lifestyle is great but I feel like a little bit more,” James stated. “I’m a productive person so when you’re home from training at 1pm you get in a downward spiral of spending too much time on the couch.

“This is a good opportunity to feel good about my day when I go to sleep at night.”

Paulus, too, sees the drive in James, comparing him to Shamit Shome, the current Montreal Impact and Canada men’s national team midfielder who juggled university and pro football with the Eddies in 2016 in the NASL.

“It really speaks to the quality of the individual when this happens,” Paulus told CanPL.ca. “This big (accounting) company sees something. They can hire whoever they want and yet here they are making time for him.

“It takes so much personal discipline to do what Connor James does.”

If you ever questioned James’ commitment, you should know he plans on juggling his FC Edmonton duties with his accounting gig once play resumes in the CPL following COVID-19 postponements.

Yes, that means driving from Clarke Stadium straight to the office; morning on the training pitch, afternoon typing on the keyboard.

“This allows me to play football – won’t be able to do for the rest of my life – while continuing my career,” said James, adding he’s one of a few part-time employees at the firm.

“If I can maintain a bit of that career during this soccer phase of my life. It sets me up so well for this post-soccer life.”

Speaking to James, it’s clear these two occupations are equal in his mind – both deserve an equal amount of attention, both are key components of his future in Edmonton.

So, does he foresee combining his skills? Perhaps FC Edmonton needs an accountant?

“They definitely won’t want me working payroll, I’ll tell you that,” James joked.