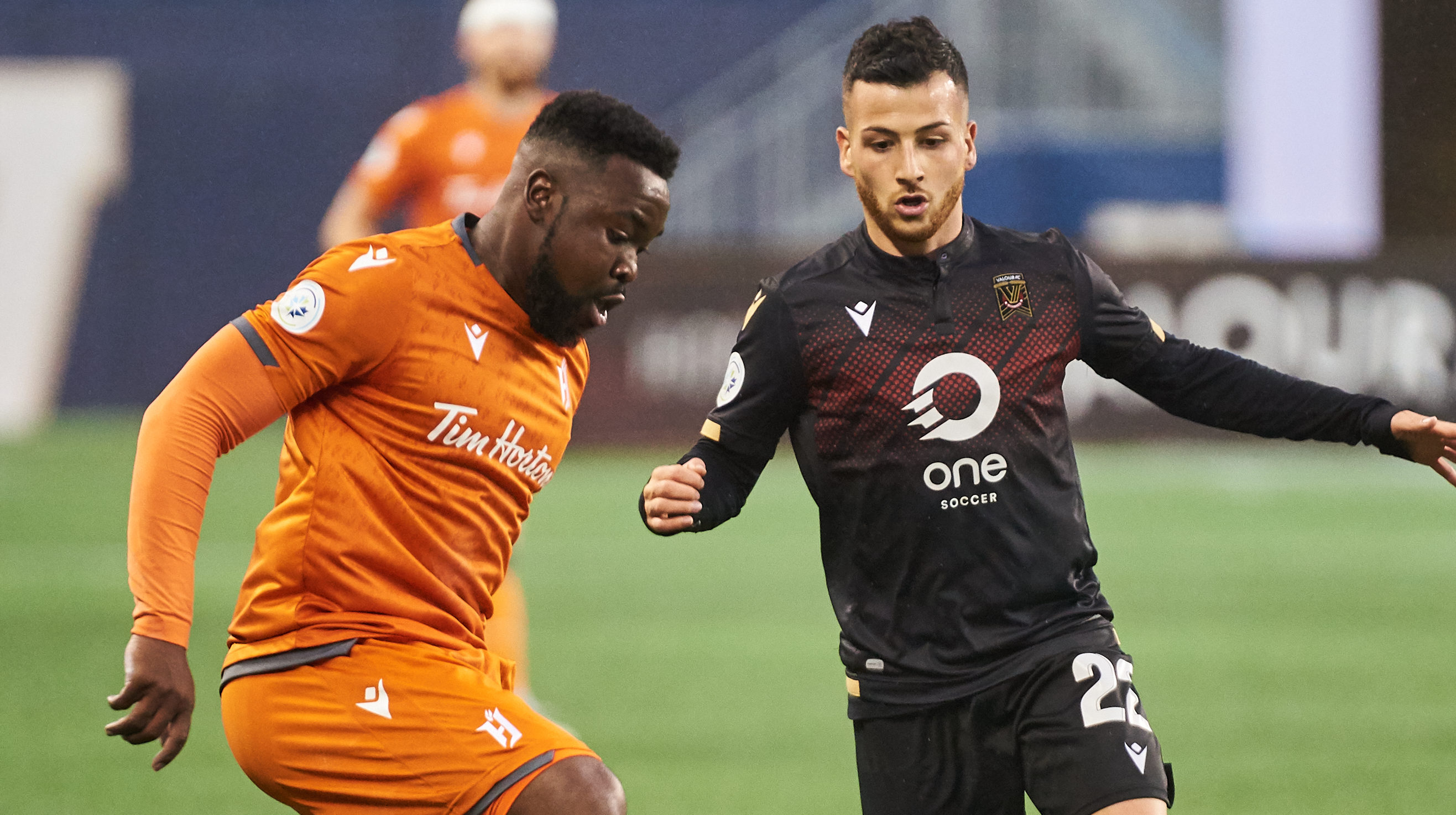 All eyes will be on Forge FC and Cavalry FC over the next two weeks, as the 2019 Canadian Premier League season comes to a close with the two-legged Finals 2019 clash at Hamilton’s Tim Hortons Field (Oct. 26) and ATCO Field at Spruce Meadows in Calgary (Nov. 2).

Coaches Bobby Smyrniotis and Tommy Wheeldon Jr. square off in their eighth and ninth meetings of the year to determine the winner of the inaugural CPL campaign – with Cavalry chasing the treble, having clinched the Spring and Fall season titles.

Attention will be squarely pointed to Hamilton and Calgary, and that includes the eyes of players from across the league.

CanPL Editorial reached out to five players – one each from each of the clubs not participating in Finals 2019 – to share their thoughts on the finalists, their respective styles of play, expectations for the two legs, and championship prediction.

CanPL Editorial spoke with Matthew Arnone of HFX Wanderers FC, Ben Fisk of Pacific FC, Marco Bustos of Valour FC, Luca Gasparotto of York9 FC, and FC Edmonton striker Tomi Ameobi, each of whom shared their expectations for the two legs of Finals 2019.

“The Finals are a bit of a selling point for the league,” Fisk offered. “It’s been a very good season, but I think those are going to be the two games that have the most eyes on them, and will sum up the whole first season. I’m expecting a hard-fought battle of two legs between those two teams.”

“I’m hoping to see an entertaining series,” Gasparotto said. “The scores are always so close, so that’ll be good for fans and neutrals watching.”

HFX’s Arnone offered: “We know Calgary and Forge play good football, so I’m hoping it’s a put-the-ball-on-the-deck kind of final, rather than a fight or a battle. Granted, teams are going to want to play it safe in the final to bring home the trophy for their fans, and I understand that, but I’m hoping to see something that puts on a show and represents Canadian football well.”

Ameobi of Edmonton added: “If you look over the course of the season and how the two teams have performed, they have completely different styles of play but both have been really effective this year. Playing against Calgary, you always know you’re going to be up for a fight, whereas when you play against Forge, more times than not, you’re going to be chasing the ball around the field.”

He concluded: “Calgary are a tough team to break down, but Forge has arguably the best footballing side in the league, so it should be a good matchup between these two teams.”

Speaking of styles of play …

In a league with only seven teams, it’s natural that Forge and Cavalry will be quite familiar with one another in Finals 2019; however, as Smyrniotis points out in the latest episode of Centre Circle LIVE!, it’s unusual that two clubs might meet a total of nine times in a single season, as these two will have come Nov. 2.

For the five star players across the league we spoke to, battles against Forge or Cavalry tally around the four-or-five match mark, but that’s still a huge body of work to draw on when we asked them to compare the playing styles, approaches, and offensive and defensive variances between these two teams, based on their personal experiences playing against the two outfits. In that regard, all five were unanimous in their assessment that Forge and Cavalry bring two very different and unique styles of play to Finals 2019.

“The intensity with which Calgary defends is probably tougher to play against than Forge, in my personal opinion,” Ameobi stated.

“They both have very clear styles of play,” Fisk said. “Cavalry, playing against them, they’re very well organized, very well structured. That makes them a very tough team to beat. They’re always in every game they’ve played this season. I don’t think there’s a single time, even when they’ve lost, where they’ve been carried out of a game. That’s a credit to how Tommy has set them up.”

He continued: “Forge plays a little more exciting, a little more attack-minded. They have a direct approach. They’re also very structured in their own right, but I think it’s a bit more free-flowing, especially when they get into the final third with guys like (Kyle) Bekker and (Tristan) Borges. It’ll be an interesting two legs, with contrasting styles of play, but I think it’ll prove to be exciting.”

Added Bustos: “With Forge, I felt like I had a lot more space to roam with the ball and get time on the ball, dribble with it. With Calgary, I felt like, every time I touched the ball, their defenders were tight on me right away and didn’t give me too much breathing space.”

Arnone views the game from the backline, where he sees a difference in approach, first and foremost.

“Forge is an out-and-out team that builds out of the back,” Arnone explained. “They have a strong philosophy there with Bobby (Smyrniotis) and the players there; they love to build out of the back. They do like to get into wide areas and get the ball into the box, but their build-up is a little more methodical than Cavalry, whereas Cavalry likes to suck you in with good football, and then switch directly to get numerical advantages on the opposite side, take you down the wing, put in a cross to guys like Dominique Malonga and Sergio Camargo who like to get their foot on the end of the ball and into the back of the net. It’s a quicker gear from Cavalry, but both are equally effective.”

Are there any similarities?

“Both their backlines are very good,” Gasparotto offered. “They have a mix of experience, youth, good fullbacks who get up and down, so they’re similar in those regards.”

Lastly, we asked each of the five interviewed players to provide a prediction for the outcome of Finals 2019:

Ameobi: “I’m going to go Forge over the course of the two legs. When they’re on form, they’re the best team in the league this season. I know Calgary managed to win both the Spring and the Fall, but I think the football that Forge plays, especially in a playoff game where anything can happen, stands in good stead.”

Arnone: “I’d like to say Cavalry at home is going to get a result, and Cavalry will hold their ground away, so I’m going to go with Cavalry; perhaps 2-1 over the two legs.”