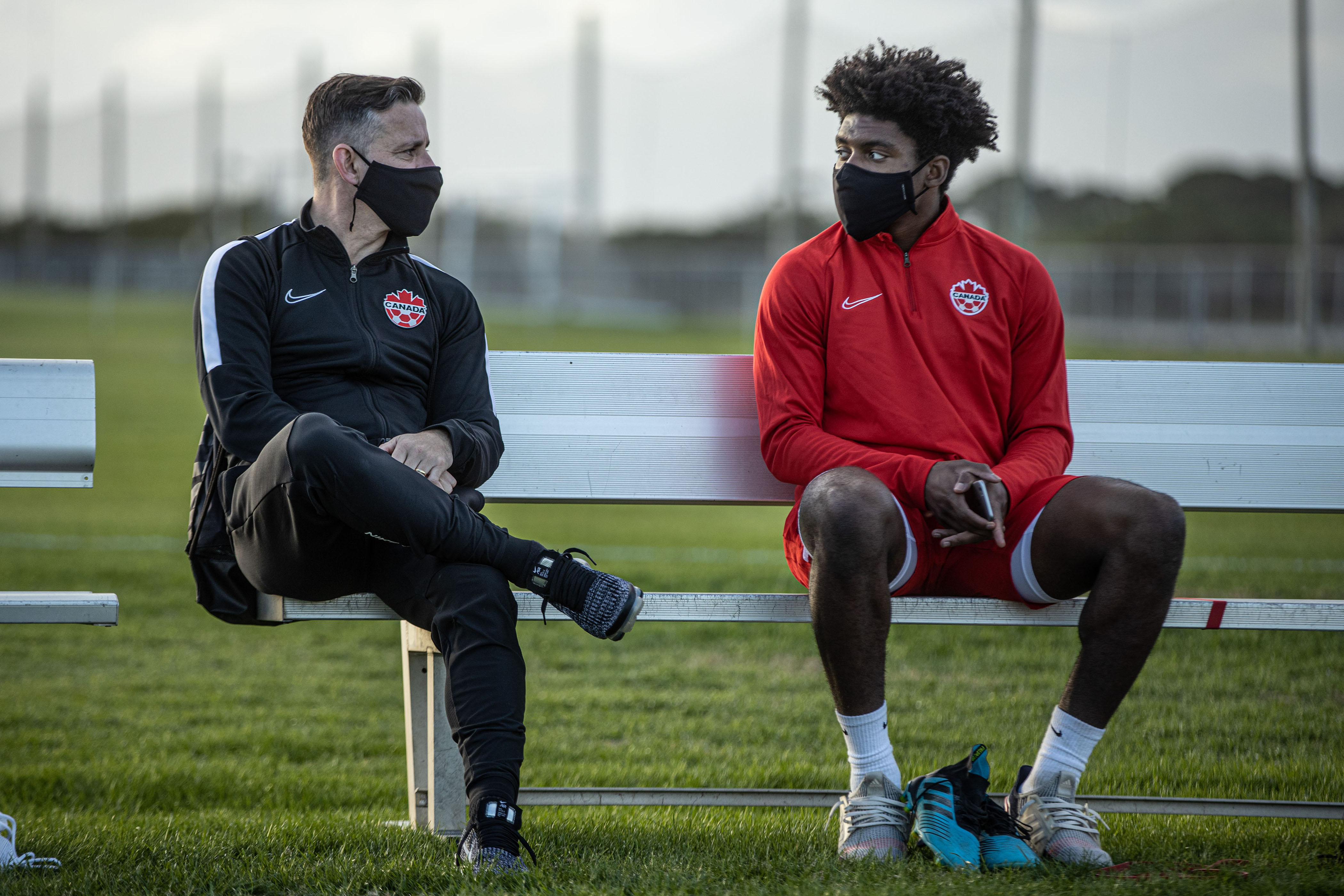 The latest edition of popular soccer video game Football Manager came out this week in FM22, and people around the world are taking charge of their favourite teams.

All eight CPL teams are in the game again this year, as well as the Canadian men’s national team, the three Canadian MLS sides and other clubs around the world featuring national team stars — there’s something for every soccer fan in this country.

Below is a deep dive into the Canadian men’s national team player pool, with the top 10 players based on in-game potential, and in-game transfer value. With the real-life men’s national team set to play a pair of World Cup Qualifying games in Edmonton this week, there are also some players who aren’t in John Herdman’s squad for you to keep an eye on, should you opt to play the game yourself.

For fans that want to take charge of their favourite women’s teams, keep an eye out for future editions of Football Manager — the creators of the game, Sports Interactive, have already begun plans to add women’s teams to the game.

Let’s take a look at what the Canadian men’s national team setup looks like.

With more and more Canadians plying their trade at top clubs around the world, and others attracting interest, there are some players in the Canadian setup with high transfer values.

To the surprise of nobody, it’s Alphonso Davies and Jonathan David leading the way in terms of their transfer value — the only two Canadians in or near the £100 million range. It’s important to keep in mind that teams will often ask for more than what they’re valued at — so you’ll likely need closer to the £95 million than the £32 million to get a budding superstar like David.

After a huge breakout year for the national team, and a strong season in Portugal with Paços de Ferreira, Stephen Eustáquio sits in third place, valued by the game in the £5.6-£16.5 million range.

The fourth and final player to have a value that stretches into double-digit millions is Besiktas striker Cyle Larin. Larin has had one of the best-ever years by a Canadian men’s player, scoring 12 goals in 11 matches thus far in 2021. He has 20 international goals in his career, and sits just two goals back of the legendary Dwayne De Rosario for the all-time Canada record. He paired that with 23 goals in 45 games for his club, en route to the Süper Lig and Turkish Cup double.

Finishing off the top half of this list is Tajon Buchanan, who is on the verge of a huge move to Europe in January. The 22-year-old made his international debut earlier this year, picking up 14 appearances since, scoring three goals. He’s also become a superstar with New England Revolution in MLS, scoring eight goals in 27 matches this season. He’s turned into one of the best players in the league, helping them break the single-season MLS points record in 2021 — winning the Supporters Shield with 73 points, 12 more than the next-closest team.

Below Buchanan are another pair of European-based youngsters — Theo Corbeanu and Liam Millar. Corbeanu, currently on loan at Sheffield Wednesday, has a goal in nine appearances in all competitions this season. He made his international debut earlier this year as well, scoring moments into his first appearance against Bermuda, and added a second goal at this summer’s Gold Cup against Martinique.

Millar made the move from Liverpool to Swiss side Basel this summer, where he has scored five goals in 23 appearances in all competitions. While he’s yet to score for Canada, he has made 13 appearances under John Herdman, including five appearances in 2021.

Perhaps the biggest surprise in the top 10 is Toronto FC youngster Ralph Priso, who’s listed as the eighth-highest valued Canadian player. Of all the players in the top 10, he’s the only one yet to make his real-life senior national team debut. The 18-year-old was beginning to win himself regular playing time for The Reds in 2021, before a season-ending ankle injury sidelined him. He was invited into a senior national team camp by John Herdman in January 2021, but is yet to make his debut.

Rounding out the top 10 are a pair of MLS stars — Lucas Cavallini of the Vancouver Whitecaps and Mark-Anthony Kaye of the Colorado Rapids. Both are valued in the low single-digit millions range — between about £1.5-£4.9 million.

Similar to the highest transfer values, it’s not much of a surprise to see Alphonso Davies and Jonathan David atop the list of Canadians with the highest potential. In Football Manager, players are given a score from 1-200 for both current and potential abilities. The closer to 200 the better, and the ratings are based on attributes like passing, finishing, tackling, etc.

Next, however, are three players who weren’t in the list above, and two of whom may have previously flown under the radar of men’s national team fans.

The first one is Vancouver Whitecaps youngster Kamron Habibullah (more on him in a minute), who has a potential ability of 146. He’s made just three appearances for the Whitecaps, and is yet to be called into the senior national team setup, but is a highly-regarded prospect for the MLS side.

Also cracking the top ten is Jules-Anthony Vilsaint, an 18-year-old striker in the Royal Antwerp youth setup in Belgium. He’s yet to make a senior appearance for the club, or be called into a Canadian national team camp at any level. He was, however, named to John Herdman’s provisional roster for the 2021 Gold Cup, but didn’t crack the final roster — and is definitely a player to keep an eye on.

Sandwiched between the two youngsters is legendary midfielder Atiba Hutchinson. Still one of the best players in the country at the age of 38, Hutchinson has both a current and potential ability of 140/200. Hutchinson joined CanPL.ca’s Kristian Jack on Wednesday’s episode of Beyond the Pitch — an in-depth discussion about his career thus far, and the current state of the national team, among other things.

Lucas Cavallini and Cyle Larin are the other strikers in the top ten, with the veteran duo earning potential ratings of 138 and 135, respectively. In a list dominated by attackers, youngsters Corbeanu and Toronto FC’s Jahkeele Marshall-Rutty round out the top ten — both earning potential abilities of 137.

If you’re feeling ambitious, you can also try to call up dual-national players like AC Milan’s Fikayo Tomori and Sheffield United’s Daniel Jebbison, who have potential values of 168 and 130 out of 200, respectively. Good luck trying to convince them to commit to your team, however.

The virtual version of real-life Canada recruit Ike Ugbo (135/200 potential ability) will also likely reject your call-ups in favour of the England setup.

Three Players To Keep An Eye On

John Herdman’s real-life Canadian men’s national team side will take on Costa Rica and Mexico over the next few days. Here are three players not named to the November World Cup Qualifying squad for you to keep an eye on in-game.

Minnesota United goalkeeper Dayne St. Clair is one of Canada’s brightest prospects between the sticks, and definitely someone ready to step into the national team fold right now, should you choose to take over the Canada job in the game. According to the game’s database, St. Clair is the third-best goalie in the national team pool, behind Max Crepeau and Milan Borjan.

His potential ability is 130/200 — nothing to scoff at. Playing time has been hard to come by in 2021, with Tyler Miller starting the majority of the matches, limiting St. Clair to four appearances.

He made his Canadian national team debut earlier this year, a 7-0 victory over Aruba, and was a backup at the 2021 Gold Cup.

Cavalry FC right back Mo Farsi is the CPL player with the highest potential rating (130/200) in the game, and also ranks in the top 10 outfield players in the league in terms of current ability.

Farsi has had a season to remember for Tommy Wheeldon Jr.’s side, picking up a goal and two assists, and leading the team in minutes. In 2020 he also won the league’s U21 Canadian Player of the Year award after a strong performance at the Island Games.

Valued in-game between £350k-£1.1M, Farsi could be a relatively inexpensive pickup for your club looking for a top, young right-sided defender. Internationally, Farsi represented the Canadian U23 team in March in the Tokyo 2020 Olympic Qualifiers, making two appearances after being added to the squad late.

He’s one of the CPL’s best, and the virtual Mo Farsi reflects that.

Another young MLS player, the Vancouver Whitecaps have been high on teenager Kamron Habibullah for quite some time. The Football Manager developers agree, and Habibullah has the fourth-highest potential ability among Canadian players, as seen above.

He signed a homegrown contract with the club at the start of the 2021 MLS season, and has made three appearances thus far. If you opt to play as the Canada boss, he’s certainly someone to call into youth national team camps (and hopefully senior camps eventually). He’s made eight appearances at the youth international level for Canada, scoring three goals.

If a CPL club is where you begin your FM journey, Habibullah could be a great loan signing as well if Vancouver agree to let you take on his development. Regardless, the real winner here is the Whitecaps, who seem to have a future star rising through the ranks.