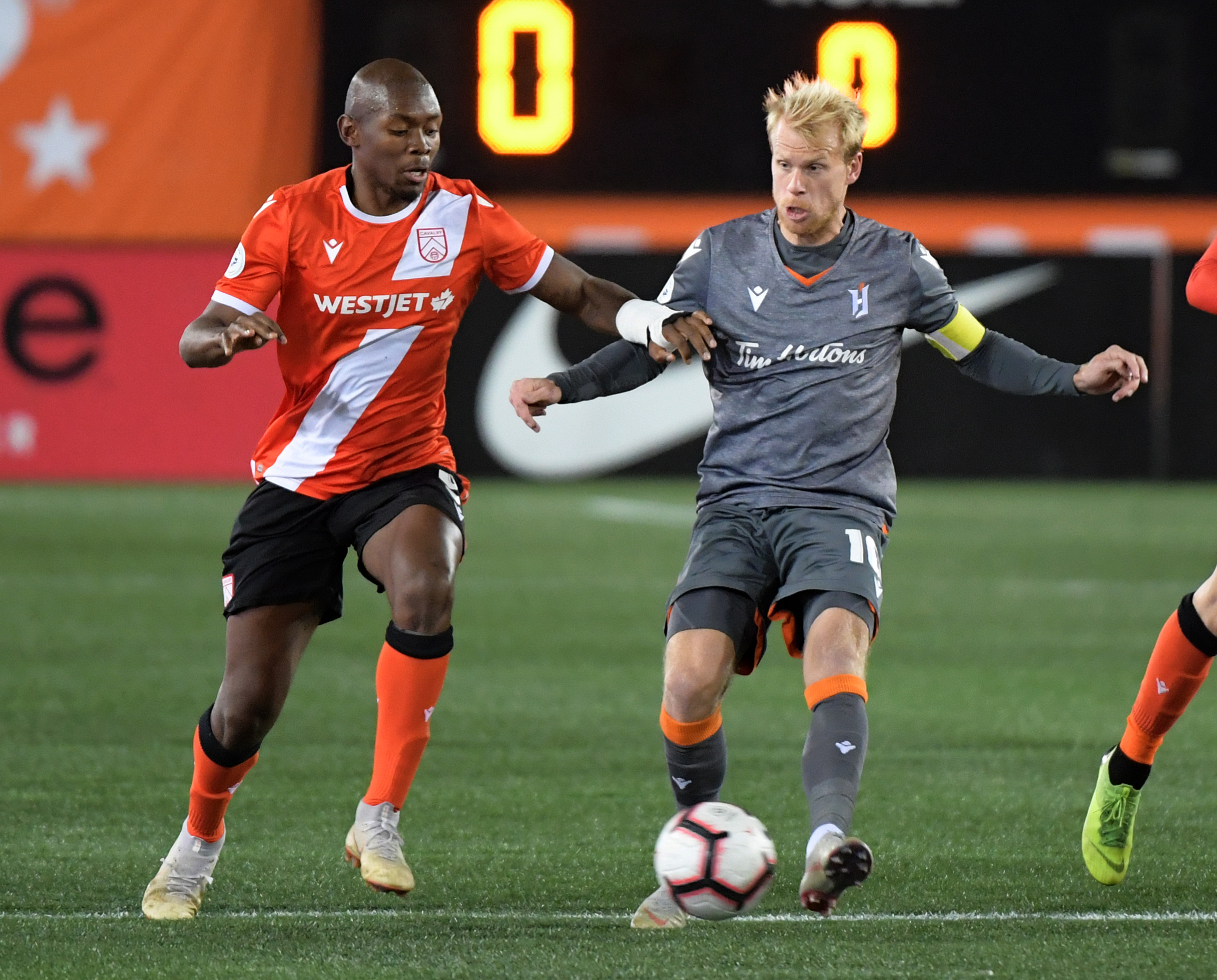 To call the Fall portion of the 2019 Canadian Premier League season a close race would be an understatement.

After nearly a full 18-match run under their respective belts, all but two points separate first-placed Forge (37 points) from second-placed Cavalry (35), though the latter still has a game in hand, to be played on Saturday against Albertan rivals FC Edmonton.

It has literally come down to this; one final match, to determine the recipient of the Fall crown.

On Wednesday evening at Tim Hortons Field, Cavalry was reminded that their opponents for Finals 2019 won’t be an easy team to beat, especially at home. Having dispatched Forge 2-1 in an earlier meeting just last week, this return trip – a preview, perhaps, of what’s to come – saw the Cavs suffer defeat, instead.

If this were the Finals, Forge just won it with an away goal in a 2-2 aggregate draw. That’s how close we are.

But … this is not Finals 2019. This is regular season, Fall action.

Both head coach Bobby Smyrniotis of Forge and Tommy Wheeldon Jr. of Cavalry will have kept some cards close to their respective chests; it’s why David Choiniere came off the bench to score the only goal of the match – albeit, forced on due to injury – and why Dominique Malonga sat on the Cavs’ bench at the start of the match.

Clearly, both tacticians will take different approaches come crunch time. And, with that in mind, they’ll have learned a little more about one another in this, their sixth and seventh meeting of nine total encounters in 2019.

“They’re all good tests, but here’s the one thing I know; those are two unique games,” Smyrniotis said after the match. “We could have beaten Cavalry five times this year, they could have beaten us five times, but these two games would be totally different. We expect a good game every time we play (each other). It’s been a good battle.”

Added Wheeldon Jr.: “When you face a team seven times, which we already have, and we’re going into eight and nine, you’re going to get that; we’re familiar with each other. Neither of us want to give each other an inch, and that’s what you saw today, and unfortunately it’s cost some cards and injuries. But that’s something you have to manage. Neither of us want to lose a game like this.”

Now? There’s a whole lot of game tape to break down, on either side.

What could be said that can resonate after a 1-0 win for Forge? Smyrniotis was, predictably, unconcerned with the ramifications, postulations, and general sentiments following his team’s latest victory – as ever, he’s already onto the next match, mentally.  Only, the next match is the first leg of Finals 2019 – a rematch, in venue and in opponent, of tonight’s affair.

“The important thing we talked about today was the performance,” Smyrniotis said. “We wanted a good, complete performance. We didn’t talk so much about the result, because we always want to go out there and win and get three points, but it was important for us to get a good showing in, with this being our last game (of the regular season).”

He added: “The guys did great. It was a complete performance from 0 to 90 (minutes) today. We were the dominant team on the field. We had the opportunities, the possessions, and the fight.”

Meanwhile, Wheeldon Jr. may want to return to the drawing board and figure out what life might look like without Nik Ledgerwood in the mix, as his captain picked up a head knock that might rule him out of consideration, if fortunes don’t favour his quick return.

He’ll also wonder how to plug some of the cracks that have begun to emerge within his team, particularly at the back, where things haven’t looked quite as rock-solid of late as they were at the start of the campaign, through the Spring season. Where once Cavalry stood a defensively resolute outfit, there are now doubt. And doubts fester.

“It’s not easy coming here, and I think it was a rude awakening for our lads,” Wheeldon Jr. offered. “We weren’t our best today, and we got punished for it. It’s a good lesson to have, going into the Finals.  ”But, we’ve got Edmonton on Saturday, a quick turnaround, and then it’s on to the Finals.”

Whatever happens on Saturday, the final chapter has already started being written.

Regardless of who wins the Fall, it’ll be these two teams, Forge and Cavalry, competing for the CPL’s inaugural crown. For Cavalry, winning the Fall is an important part of claiming total dominance of the season; for Forge, it’s a clear sign that the Spring winner is not without their flaws. It’s the blood drawn from the cheek of a god, a poetic symbol of mortality. Or inevitability.

Forge takes on Cavalry FC on Oct. 26 at Tim Hortons Field. On Nov. 2, the two meet again for Leg 2 at ATCO Field, Spruce Meadows, in snowy Calgary. Spring, Fall, it all comes down to these last two tilts. After that? Winter is coming.