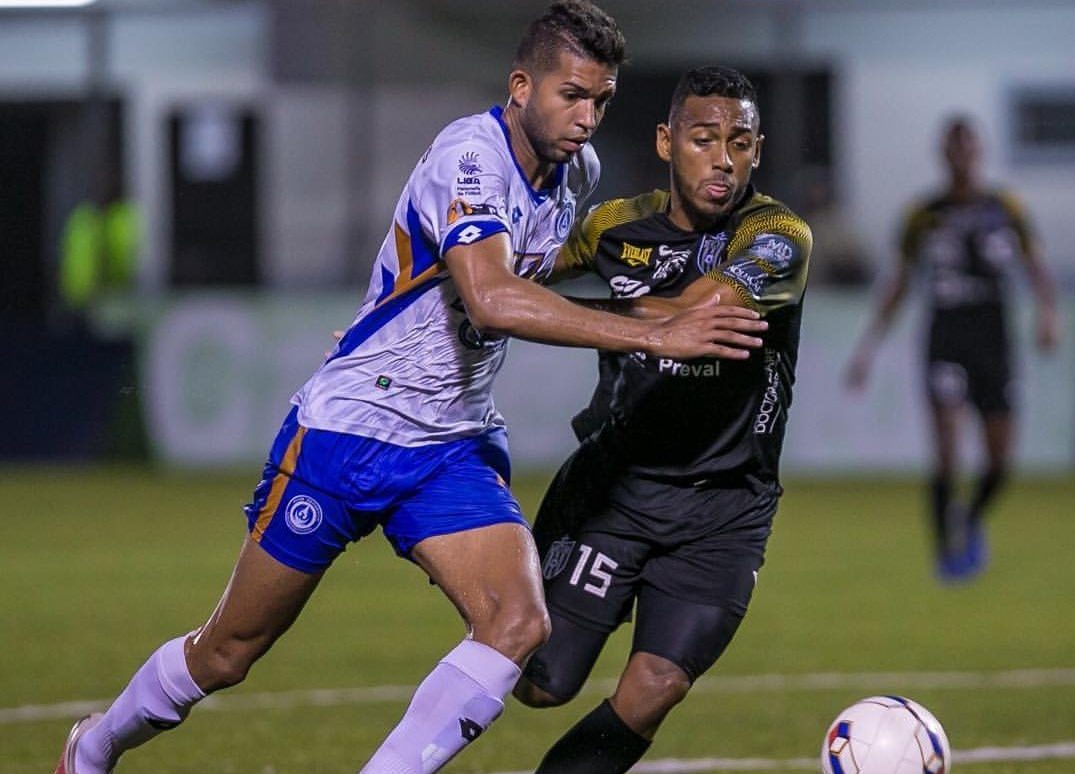 Amir Soto, left.
Gale on Valour re-signing Amir Soto: ‘We wanted to show the same loyalty back to him’
2020-11-16
by
Ed Tait, CanPL.ca contributor
News

It’s a transaction that likely generates just a shrug of the shoulders across the Canadian Premier League.

But the recent announcement by Valour FC that Panamanian defender Amir Soto will be finally joining the club for 2021 is so much more than that.

It’s about the loyalty Soto showed to Valour – despite the fact visa issue prevented him from even getting to Canada this year – and yet how a bond was built between himself and his would-be teammates, even though they were separated by thousands of kilometres.

“He has done everything to stay connected with us,” Valour GM and coach Rob Gale told CanPL.ca. “The big story for me, and why we are so excited to have him for next year, is he proved from afar that he was willing to do everything.

“He was on every Zoom call, every video chat. He joined us virtually in the bubble at The Island Games. A couple of times we called him up from (PEI) and involved him in team meetings.

It’s worth rewinding a bit here for some background. Valour first announced the signing of Soto – a six-foot-two centre back who has trained occasionally with the Panamanian national team – way back in February.

He was expected to arrive in Winnipeg in early April, but the COVID-19 pandemic delayed the processing of his visa. In fact, what is normally a six-week process took almost five months and, ironically, Valour received word that Soto’s visa had arrived just as they were returning from the CPL’s Island Games that served as their abridged 2020 season.

And while Soto might have been frustrated by that whole ordeal, he certainly didn’t show it to his squad or his teammates. That loyalty is part of why they are so eager to get him on board for 2021.

“For him to still stay connected with the group and be sending messages in the WhatsApp chats and joining the technical discussions all the way through, to be doing all the homework pieces we asked the players to do… it just shows you how committed he is to the club,” Gale said. “And he hasn’t actually met any of us face to face.”

Valour fans got a hint of Soto’s dedication and loyalty back when he first signed. In an interview with CanPL.ca he did back in February he said: “You can expect a guy who trains very hard and wants to help the team get all its objectives this season. I wake up thinking about football and that motivation is what allows me to do well on the field.

“My family sees me as the promise for them. My family has helped me every day to support me. They are very happy and excited to come to Canada one day to see me IG Field, the Valour stadium.”

Soto left his family in Panama City to pursue the game professionally when he was 18. He moved to Florida for a short stint to live with his aunt and take English classes. He had a trial with Ringkøbing of the Danish second division and ultimately returned to Panama where he played 10 matches with CD Universataio in 2018-19.

His name came to Valour through the CPL’s partnership with 21st Club, the data and analytics group that helps the league recruit internationals under the age of 23.

The middle of Valour’s back line was the club’s strength at The Island Games, with Andrew Jean-Baptiste and Julian Dunn (on loan from Toronto FC ) dominant forces in the seven matches. Jean-Baptiste will be back for next season, while Gale said they are in discussions with Dunn about a possible return.

But every coach will insist you can never have enough of a good thing.

“We want a pool of quality players through the spine of our team,” Gale stated. “There’s no question we showed big improvement of that this year. Amir would have been a big part of that. So as we build to next year we know there are going to be injuries and we need the ability to adjust our system and this depth allows to do that.

“Amir is a high-level, international Concacaf-quality defender. Getting him back is a real big deal for us. We wanted to show the same loyalty back to him that he did to us. He’s already a part of our culture without having even been here yet.”