The Gatorade Team of the Week for the fifth week of Canadian Premier League action in 2022, brought to you by Kristian Jack and OneSoccer’s Oliver Platt. 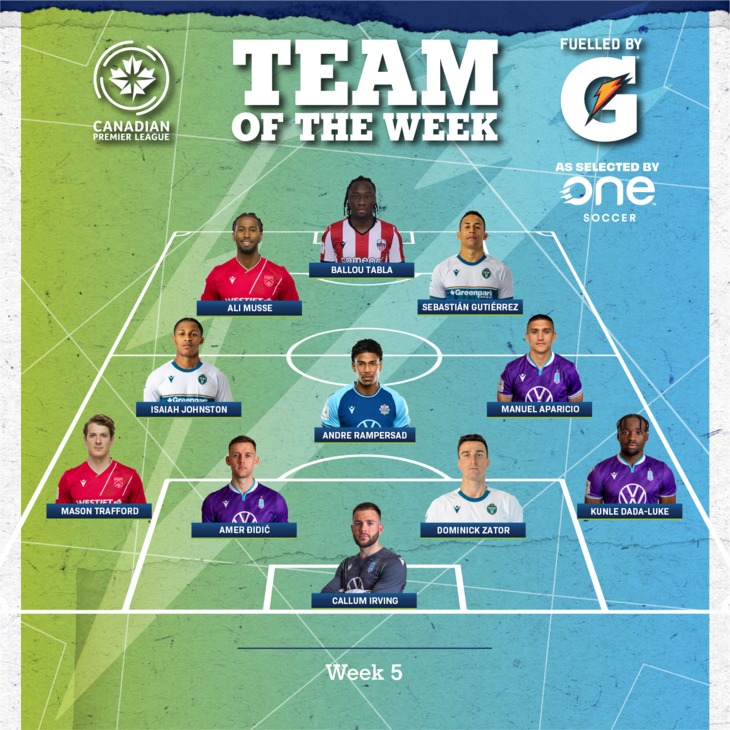 In one of the most spectacular goalkeeping performances to date in the Canadian Premier League, Callum Irving made 10 saves as Pacific left the nation’s capital with a 1-0 win and a clean sheet. It was Irving’s second clean sheet of the season, tying him with Ottawa’s Nathan Ingham and Nikolaos Giantsopoulos of York United for the league lead. His performance was made all the more special by the fact that Irving had played professionally in Ottawa for three seasons.

After missing Pacific’s last two matches, Dada-Luke returned in excellent form against Ottawa. He was a big part of the second-half push that saw the league leaders pick up their first away victory of the season. Dada-Luke had seven crosses, two chances created and an impressive 87% pass accuracy in the final third as he was probably the only Pacific player who had any real joy against a resilient Atlético backline.

Forge managed a season-low 0.35 expected goals against York on Friday, and a big part of that was Dominick Zator’s leadership at the back. He won all three of his duels, six clearances, as York dealt incredibly well with a very direct and purposeful Forge attack that consistently tried to get in behind.

For the second straight week, Cavalry picked up a clean sheet and it was easy to see why with a player like Mason Trafford on the park. Trafford hardly put a foot wrong the entire 90 minutes, leading all starters with 92% pass accuracy, as he calmly controlled the match from the back.

Despite his heroics, Irving was quick to point out after the game that clean sheets are a team effort, and the first player he singled out as critical to the win against Ottawa was Didic. Only one ball beat Irving on the day, and Didic was there to clear it off the line. He also had four clearances and won possession six times during the match.

After a nervy start at TD Place Stadium, Pacific was able to regain control of their match against Atlético Ottawa. A big part of that was the midfield efforts of Manny Aparicio, who was excellent in possession, completing four successful dribbles, and 85% pass accuracy including 30 passes into the final third. He took three shots during the match, one of which found the post to Ingham’s right before bouncing into the path of Alejandro Diaz for Pacific’s lone goal.

Playing in a deeper role than he has normally been deployed of late, Johnston played a key role in York’s midfield duel with Forge. Johnston won three tackles, had a tidy 83% passing percentage, and hustled out to the top of the box to make a key block on David Choinière in the second half that was heavily applauded by his teammates.

Wanderers earned their second road clean sheet of the season and a big part of that was down to the efforts of Rampersad. The veteran midfielder controlled the middle of the park, winning possession 14 times during the match. His partnership with Jérémy Gagnon-Laparé continues to make the HFX midfield one of the most solid in the league.

Gutiérrez scored the goal of the weekend in the Canadian Premier League to hand York United a huge 1-0 derby victory over Forge FC. His one-two with Osaze De Rosario before sitting down both Dom Samuel and Triston Henry in the Forge net will instantly go into 905 derby lore.

GOAL 👑@YorkUtdFC open the scoring late in this #905Derby clash vs. @ForgeFCHamilton as Sebastian Gutierrez carves apart the backline and dances around the 'keeper 🕺#CanPL | 🔴 https://t.co/7JFAUhgjL6 pic.twitter.com/REuDgHdKeD

Cavalry was the only side that scored more than a single goal this weekend and that was in big part due to the play of Ali Musse. The Cavalry attacker had a brilliant free-kick goal, as well as four shots on target during his side’s 3-0 win over FC Edmonton. Musse now has three goals on the season.

For the second straight week, Ballou Tabla finds himself in this team. This time, it came while playing in a more advanced role as a striker against Pacific, and he caused the league leaders all sorts of problems with three shots on target and three chances created. He is quickly becoming one of the league’s most dangerous attackers.