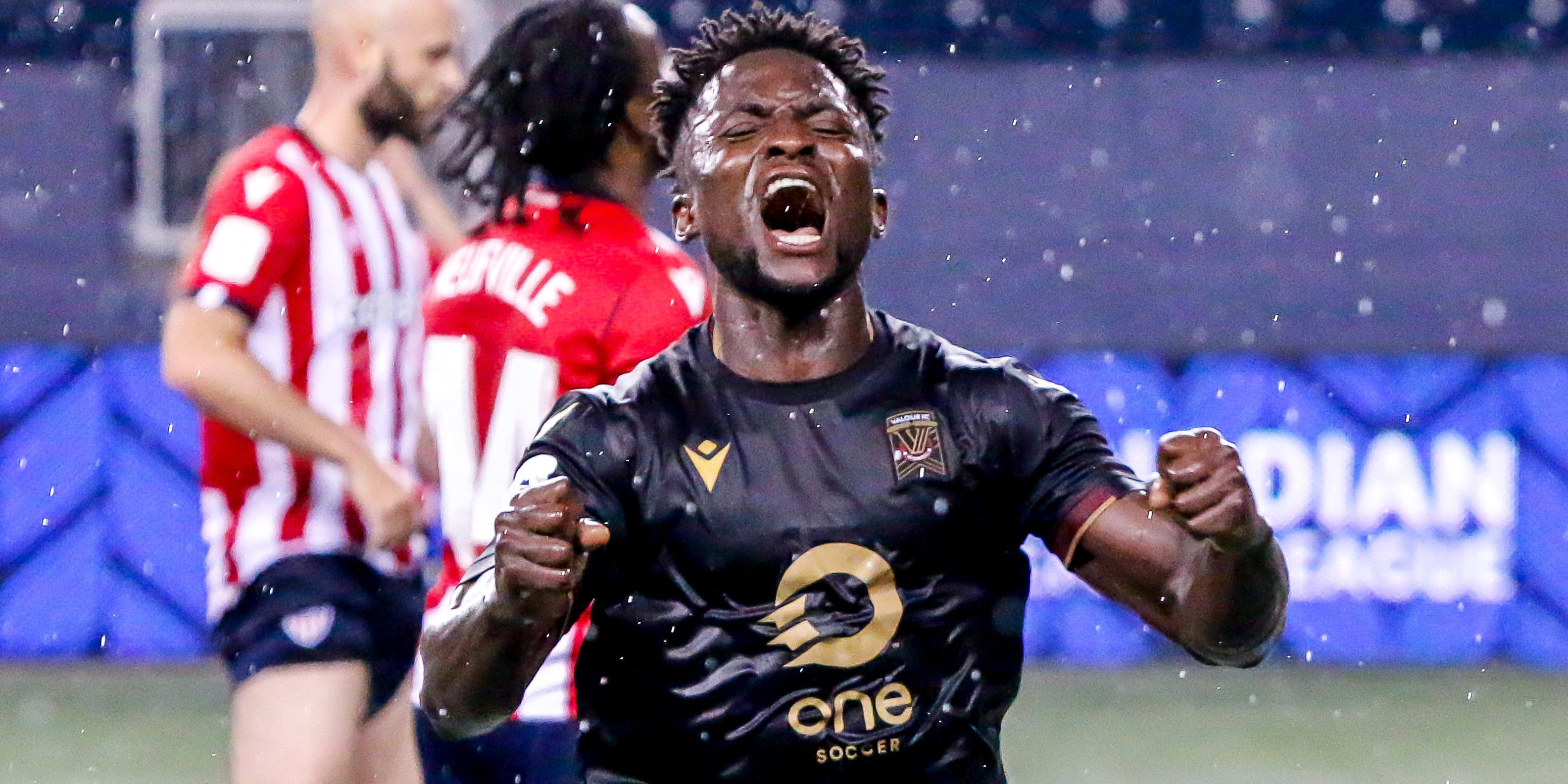 The Gatorade Team of the Week for the second week of the Canadian Premier League action in 2021, brought to you by Kristian Jack and OneSoccer’s Oliver Platt: 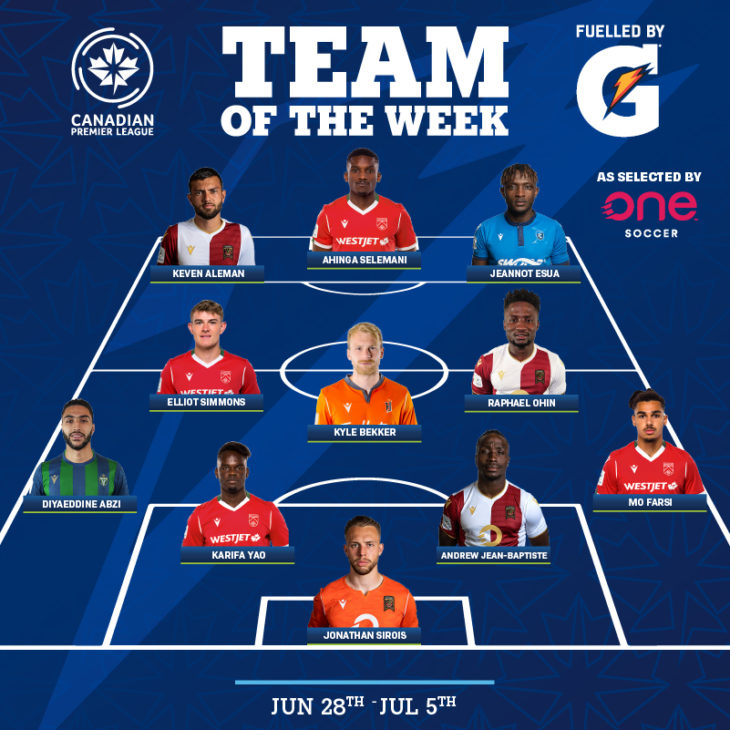 It has been a special start to the season for the CF Montreal goalkeeper on loan to Valour. Three games, three clean sheets and three wins. It began on his 20th birthday with a shutout over reigning champions, Forge, and continued with back-to-back impressive performances this week over HFX and Atlético Ottawa, but it was the middle game where he particularly stood out, denying an impressive Halifax attack with important saves on Stefan Karajovanovic and Eriks Santos to keep his team ahead.

On the opening day of the season one the real avenues of success tactically for Atlético Ottawa club was down the left through Rafael Nunez, playing inside in space that caused confusion for FC Edmonton, leading to fouls and yellow cards for the likes of Jeannot Esua and Ramon Soria. Cavalry’s 4-1 win over Mista’s men was very different thanks to a commanding display at right back by one of the league’s best in his position. Farsi is a calming presence on the ball and reads the game well out of possession, gaining possession a team-high eight times in their second match of the week, a 0-0 tie against HFX Wanderers.

Another week, another spot in the team of the week for our player of the week from last Friday. The only returnee from week one and his selection was a comfortable one after scoring a crucial headed goal and leading his team to a set piece against HFX in their opening match of the week followed by another standout performance in a 2-0 win over Atlético Ottawa. Head Coach Rob Gale was full of praise for arguably the best defender in the league at the moment, claiming he is lucky to have him available at this stage of the season: “Thank you Haiti. How is he not in the Gold Cup?” said Gale. Jean-Baptiste was also in fine form behind the microphone and had a message to those that doubted his team.

"A lot of guys on this team have been ignored by a lot of people, and you know what that's fine cause everyday we get to go on the field and shut them up"#CanPL pic.twitter.com/lqLtmFmOrH

Tommy Wheeldon Jr has a lot of depth and competition for places throughout his squad. Much of the talk around this is usually reserved for what can happen in the final third of the pitch but alongside standouts Mason Trafford and Daan Klomp, Wheeldon Jr has unearthed another gem in Yao, who joins Sirois as the second young Canadian on loan from CF Montreal to make the team of the week after starting both of his team’s matches. “All of our centre-backs can play, we’re lucky in that regard. We have a really good centre-back core and he’s a huge part of that. I’m really proud of him,” said Trafford after he partnered Yao to a clean sheet against HFX. The 20-year-old led the team in clearances (6) and looks comfortable on the ball, leading the team with a 93% pass accuracy (66 of 71 pass attempts completed) in game two of the week after a 92% pass accuracy in the 4-1 over Ottawa when he completed 95 of 103 pass attempts.

The 22-year-old Canadian makes our team at left back despite playing the majority of the season further forward for Jim Brennan’s team. Abzi, a natural left back, has been a dynamic wide player in Winnipeg, arguably one of the most impressive players in the league, relishing the chance and opportunity to take over games and bring out more of his personality on the pitch. York are a young team that needs leaders on and off the pitch and in Abzi they have a player not afraid to be brave in the final third and try different things to open up the opposition. Two goals in the first two games certainly helps his confidence. Continues to be a player other leagues will monitor.

One of the best stories to emerge from the opening two weeks of the season has been Ohin. Jean-Baptiste calls him ‘the Winnipeg Kante’ adding it is a privilege to play behind someone who regains possession often. Valour boss Rob Gale calls him ‘the rhino’ for the amount of energy he has and how much ground he covers. We will simply call him one of the league’s best midfielders who has already played at the base of a midfield three, in a double pivot with a number ten, and as an eight just ahead of the excellent Daryl Fordyce in a 3-4-1-2 shape through three games and three 2-0 victories. The Ghanaian’s magical week was capped off with a special strike, scoring his first ever professional goal. A moment he described as ‘very emotional’.

With 20 minutes remaining in their third game of the season against Pacific FC, the reigning champions had still not scored through 250 minutes of play. The time needed a lift. The team needed Kyle Bekker. His game awareness and intelligence was on show as he stepped into midfield, dispossessed Sean Young, starting an attack for Forge that ended with Mo Babouli’s smashing home their opening goal of the season. Bekker’s celebration after the goal said it all. It was only the third game of the season but could prove to be a monumental moment for Bekker and his side. The Canadian wasn’t done, intercepting a ball soon after and igniting another attack that was ended with Tristan Borges slotting home from the penalty spot. A commanding display from the 2020 Player of the Year.

Like Ohin, the English-born midfielder had an outstanding week that included a man-of-the-match performance in one game and a goal in another. Simmons was fantastic in Cavalry’s 0-0 draw with Halifax producing the type of commanding midfield display that takes his team to another level. Simmons is comfortable deep but is at his best penetrating in the opposition’s half where his energy and alertness makes him a threat pressing without the ball and where his range of passing and understanding of space can hurt teams when in possession. His goal against Ottawa exemplified his all-around game.

On the right we have chosen Esua who, like Abzi, has thrived in a more attacking role this season under Alan Koch. FC Edmonton have had a good week, winning their first game since 2019, and going unbeaten in both their encounters after a competitive draw against York United. Esua has been one of the best players, providing real energy, tactical discipline and directness in wide areas, capped off by one of the greatest strikes in Canadian Premier League history.

The final member of a strong Cavalry team that makes our best XI is a newcomer to Wheeldon Jr’s squad in 2021 but whop already looks like a difference maker. Selemani scored two first half goals in their comprehensive 4-1 win over Atlético Ottawa and was rewarded for his tremendous work ethic, leading an intelligent and resolute press from his side, much to the pleasure of his boss. “In the hotel hallways, we’ll try and creep up on each other to surprise, so maybe it’s part of our DNA,” joked Wheeldon postmatch. “We’re the Cavalry, we want to be on the front foot. We’ve said that from day one.” Selemani looks like the right kind of profile for this team.

After a difficult time with FC Edmonton in 2020, 27-year-old Aleman is thriving in a new environment under Rob Gale in Winnipeg. Aleman was brilliant in a false nine role against Atlético Ottawa, occupying the space in between the midfield and two wide attackers in William Akio and Austin Ricci. “I thought he was our best player,” Gale said postmatch praising the Canadian’s ability to follow through on the instructions, read the game and make an impact. The fourth member of Valour to make our team as the league leaders to continue to be a major story early in the season.