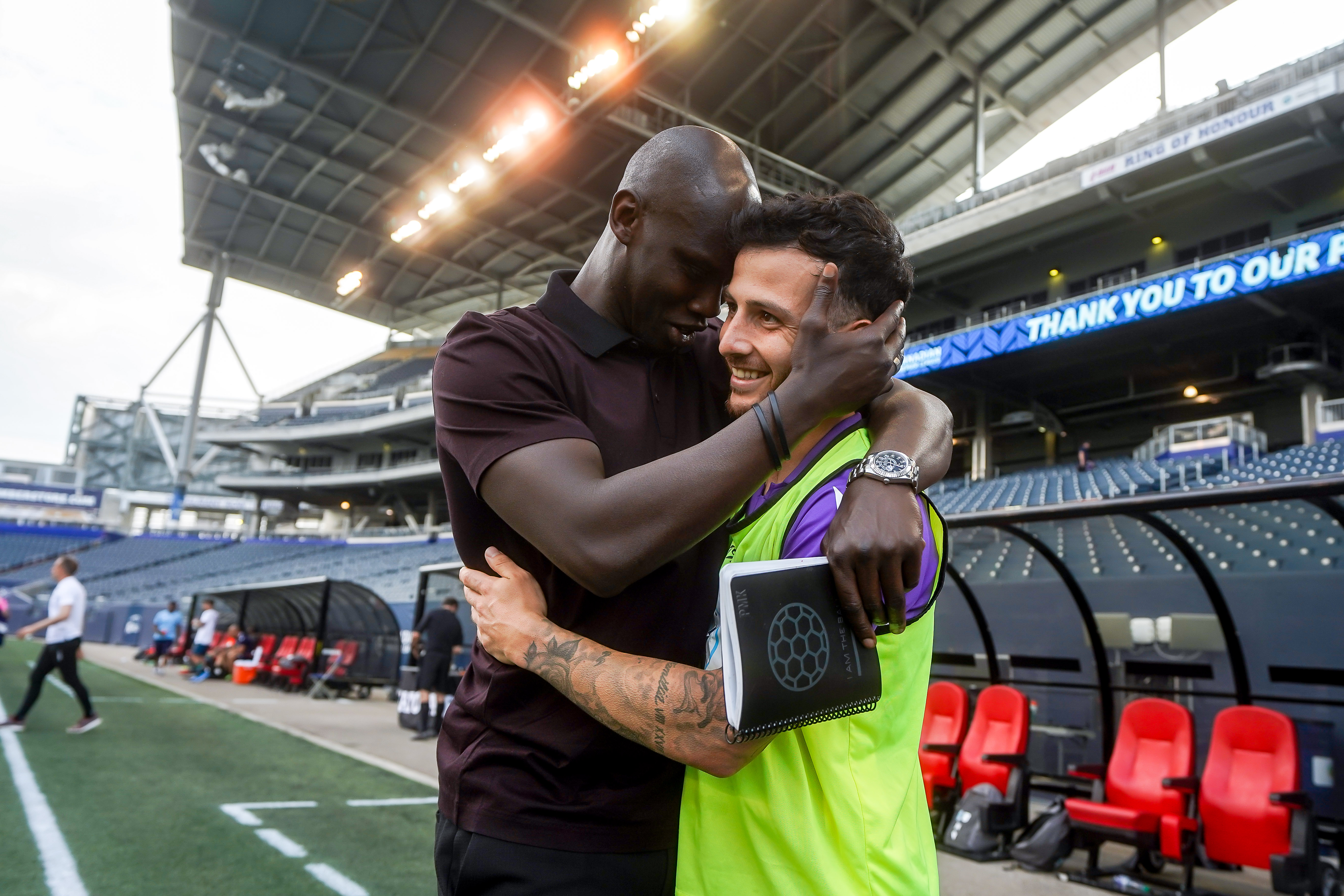 The Gatorade Team of the Week for the third week of the Canadian Premier League action in 2021, brought to you by Kristian Jack and OneSoccer’s Oliver Platt: 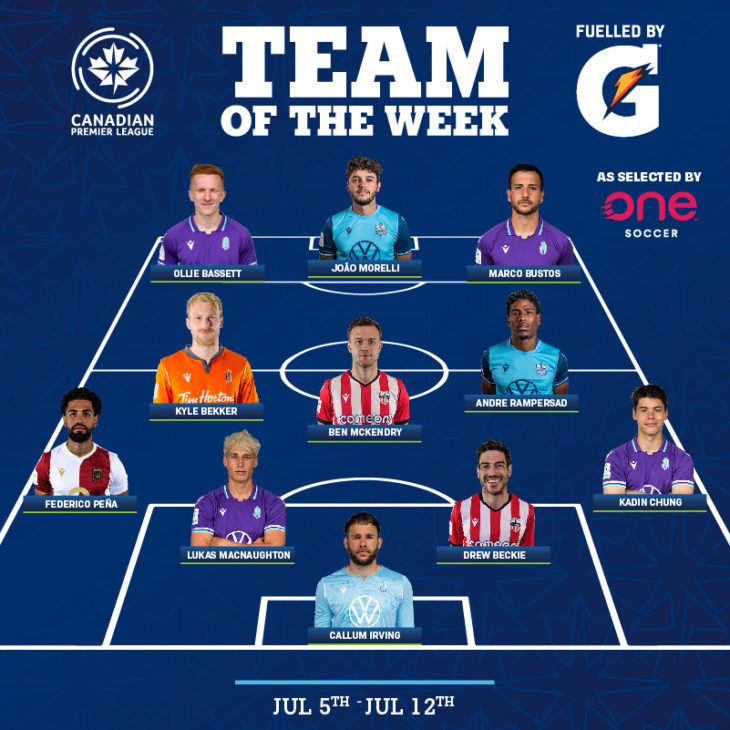 A tremendous week for Pa-Modou Kah’s team sees five players inserted into this XI, including their goalkeeper after back-to-back clean sheets in wins over Atlético Ottawa and York United. Irving has played every minute so far and his calmness in possession is clear to see. He is currently second in the league amongst all players in completed passes in the defensive third of the pitch and has a real connection with his defenders who can trust him with the ball at his feet.

Apologies to Morey Doner of HFX Wanderers who also had a fantastic game at right back but Chung makes the team following two more standout performances this week. Kah believes there is no better combination and understanding shown between a full back and a winger in the league than between Chung and Bustos and it is difficult to argue. The pair were brilliant against Atlético Ottawa and continued that form into Saturday’s win over York United. Chung is influencing every game he is a part of and is currently second in the league in total touches, third in the league in pass attempts and tied for fifth for the most successful passes in the opponent’s half. All from an attacking right back position.

Beckie was a disappointed figure midweek when his team lost 1-0 to Pacific FC, a result that made it sound closer than it actually was. He knew the team needed more and they delivered on Sunday with the defender showing his versatility by starting at right-back at the beginning before moving centrally to his more favoured position in the second half. The Regina-born, former Columbus Crew draft pick, made a crucial header late in the match to preserve the lead over Cavalry FC and was a huge foundation for success on a night when the team really needed it.

The 26-year-old gets his first selection of the season in the Gatorade Team of the Week after a stellar start to the campaign in Winnipeg. The Pacific FC centre-back was signalled out his boss Pa-Madou Kah recently for his work and despite playing with different partners he has been a model of consistency so far, showing just how important a distributor he is from the back. One of seven outfield players to play all 450 minutes so far, he also leads the league in total touches (412), successful passes in his own half (223) and is tied for fifth with his teammate Chung in successful passes in the opponent’s half (91).

After a man-of-the-match display against Forge, Peña edges an equally impressive Kwame Awuah for our spot at left back this week. Pena was excellent for the second time this season against the reigning champions and continues to deputize for the injured Brett Levis at a very high level.

Halifax picked up their first win of the season on Saturday thanks to two goals from Joao Morelli but the Trinidadian midfielder was almost as important to their cause as their goalscorer. The captain does it all in midfield, leading his team in total passes and total passes in the opponents half and impressively, having only played four games, is already fourth in the league in ball recoveries with 33. Only Awuah (34) and the impressive Valour pair of Andy Baquero (36) and Raphael Ohin (38) have more.

The former Vancouver Whitecaps midfielder has been his team’s best player this season. A physical threat in midfield, McKendry dispossesses teams with ease, gaining possession a team-high 11 times against a dangerous Pacific FC attack, and maintaining that level in a vital victory on Sunday against Cavalry FC. McKendry was instrumental for Mista’s men and stepped into a tackle to regain possession and start an attack that led to his team’s best chance of the first half.

Another week, another spot in the team for 202o’s best player. Following a dynamic performance on the front foot in their 3-0 win over Pacific FC last weekend, the central midfielder found another gear in a commanding 2-0 win over Cavalry on Thursday, featuring two brilliant strikes – including one (below) that will be a contender for goal of the season – that earned him Player of the Week honours.

Unquestionably the best player in the Canadian Premier League right now, Bustos continues to deliver and dazzle in his hometown of Winnipeg. His goals will always gain headlines and his pin-point finishing has been very impressive this season, but his ability to find space on the right side and penetrate with confidence has seen him become a real difference-maker in this league. Bustos is timing his runs better and arriving in the penalty box at key moments – as show on his first and second goals scored this season. Only Stefan Karajovanovic, Diyaeddine Abzi and Austin Ricci have had more touches in the opposition’s penalty box. Only one of the four, though, have scored a goal like this:

53’ – @Pacificfccpl 3-0 @yorkutdfc @marcobustos10 are you kidding me? With his second in the match, Marco moves into the all-time lead for CPL goals. #PACvYRK l 📺: @onesoccer
pic.twitter.com/brt1bozbXH

Cometh the hour, cometh the man. Morelli’s brace against FC Edmonton in the soaring Saturday afternoon heat brought much-needed firepower to a team that had been struggling to finish their chances. Heading into the game, many of the statistics showed that Stephen Hart’s team were still creating enough to be in games but three games without a goal told the only story that really counted for many. The Brazilian wasted little time changing that, smashing in after seven minutes to settle the nerves and allowing Rampersad and others to calm the game down and play it in their own identity.

Calm and clinical. 🔥@Jmorelli_96 has his second of the match to double the lead for @HFXWanderersFC!

Morelli already looks like a player fans will be excited to watch regularly at Wanderers Grounds now that the schedule has been released as he shown with real tight control, trickery and technique on his second goal of the match.

A slick team move ends with @moreydoner3 finding @Jmorelli_96 for the opener.

It is already a second selection in the first three weeks on the Gatorade Team of the Week for the English-born midfielder after a tremendous display where he created two goals inside the first ten minutes against York United. Bassett was deployed at the base of midfield to start the season but has relished the chances in a more attacking role since and it is his speed of thought and vision on the opposite flank to Bustos that has given many opponents a challenge. Ranked second in the CPL behind Bustos in successful passes completed in the final third.