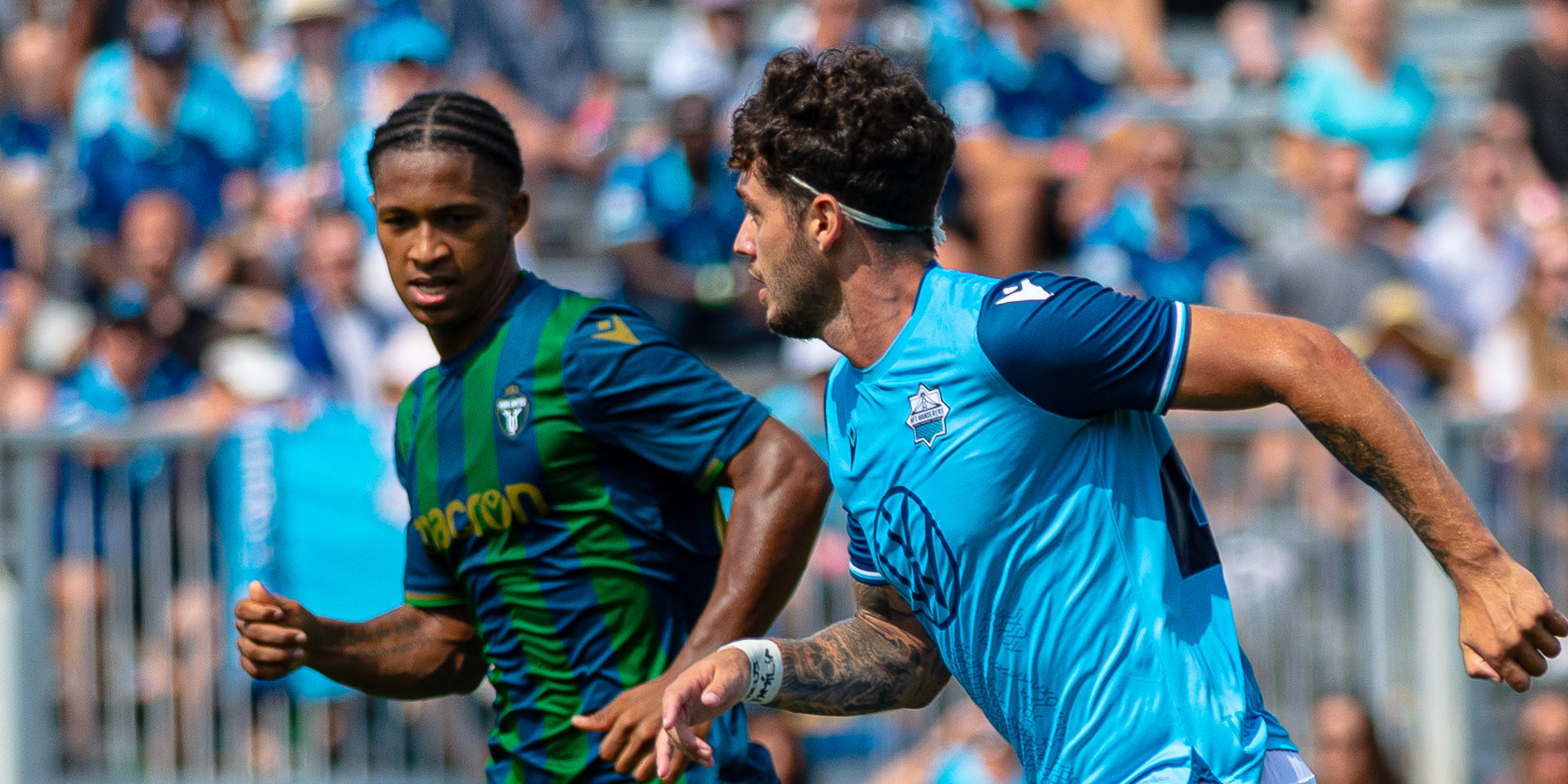 The Gatorade Team of the Week for the seventh week of the Canadian Premier League action in 2021, brought to you by Kristian Jack and OneSoccer’s Oliver Platt.

Commanding the goal for York in perhaps the most exciting match of the week — a 3-2 win over HFX at Wanderers Grounds, Giantsopoulos put in a very strong performance despite conceding twice. He made four saves — one of which was a tremendous point-blank stop on Stefan Karajovanovic to keep the game knotted at 2-2 in the second half — and his distribution was excellent. Giantsopoulos couldn’t really have done much better with either of the two HFX goals, the first being a deflection and the second being a shot through traffic that the goalkeeper likely couldn’t see.

Cavalry’s leader in minutes played finally got on the scoresheet for the first time this week, finding the net with an excellent finish to help his side beat Valour 1-0 at Spruce Meadows. Farsi started that game at right wing, but he moved back to fullback in place of Daniel Kaiser near the hour mark in both of the Cavs’ two matches this week. Farsi played every single minute of victories over FC Edmonton and Valour, and he has started to look more and more like the player that dazzled so much at the Island Games last year. He led his side with 72 touches against Valour, with the Cavs playing 54.2% of their attacks up Farsi’s right flank.

After Zator was sent off in York’s home opener against Forge, it looked like the Nine Stripes would be in real defensive trouble the following week without a natural centre-back available. Their salvation came in the form of a Canada Soccer ruling that rescinded Zator’s suspension, which allowed Jimmy Brennan to deploy his stalwart defender — and give him the captain’s armband — in both matches this past week. The 26-year-old was tremendous against both Forge and HFX for York, demonstrating his diverse skillset in two very differently-paced games. Against Forge, Zator was called upon myriad times defensively, making a stunning 11 clearances, four interceptions, and three tackles (his full map of defensive actions is below). York enjoyed quite a bit more possession against the Wanderers, which allowed Zator to get on the ball more — he led the team in touches (74) and passes completed (53).

“The thought of not having Dom going into this game was a bit scary,” Brennan said after the match against Forge. “He’s a born leader – the way he was helping someone like Max [Ferrari] at left back was very, very good.”

Cavalry’s star central defender was absolutely immense once again in both games this week, serving as a consistent calming presence in the back for a very defensively-sound team. Klomp  managed to bag his first goal in a Cavalry shirt on Tuesday, smashing home a loose ball in the box for what would stand as the match winner, and the Dutchman was certainly deserving of a reward like that. He’s been an absolute force in the backline so far this season — look no further than the seven duels (out of 10) he won against the Eddies, or his 87.2% pass accuracy against Valour (in a game where Cavalry had less of the ball than they might regularly).

About this time last year, Daan Klomp was staring at his phone, wondering if he'd ever play professional soccer again 📞

Now? He's become a crucial part of the @CPLCavalryFC backline in #CanPL@KristianJack breaks down exactly how and why 👇 pic.twitter.com/uBOBOXlORL

Involved in both of the Wanderers’ goals against York on Saturday, Ruby has really begun to thrive with consistent minutes at left back for HFX Wanderers. He has a real desire to get forward with the ball and make overlapping runs, but he’s able to keep his side in possession more often than not with short passes to midfield or cutbacks into the box rather than blind crosses — although the low cross he did make to Joao Morelli ahead of HFX’s second goal was top-notch and placed perfectly. Ruby has been excellent on the ball and quite dependable without it, as all good modern fullbacks should be. “We’ve been encouraging him to get forward and to make those runs, and give us some penetration in the wide areas, and today he was good at it,” Wanderers gaffer Stephen Hart said of Ruby on Saturday.

Another player who succeeded in two quite different games this past week, Norman showed his flexibility in playing 90 minutes as a holding midfielder against FC Edmonton, and then following it up with a full shift at centre back in a clean-sheet win on Sunday over Valour FC. Much like Klomp beside him, Norman was outstanding in the backline against Valour, winning all four aerial duels he attempted and looking good as the secondary option alongside Klomp for playing out of the back. In his midfield outing earlier in the week, Norman was directing traffic from the back for Cavalry in possession, winning the ball frequently and moving it onward in his double-pivot role alongside Elliot Simmons. Players as versatile as Norman are a rare commodity, and Tommy Wheeldon Jr. will feel fortunate to be able to call on the 23-year-old.

This is Johnston’s first appearance in the Gatorade Team of the Week, but it’s unlikely to be the last. The teenaged midfielder has been immense in the centre of the park for Jimmy Brennan’s men recently, and he’s played the second-most minutes on the team so far this year. Johnston scored his second goal of the year on Saturday in Halifax, receiving a pass at the top of the box and taking time to read the play before firing a low shot through traffic to beat Christian Oxner. He also sent in the cross ahead of Max Ferrari’s goal, which was an outrageous curling ball into a dangerous area that HFX struggled to track. He — like many of his York teammates this season — has shown incredible maturity on the ball for a 19-year-old, seemingly always comfortable threading passes through lines or maintaining possession under pressure. Johnston has become a true centrepiece of Brennan’s midfield in recent weeks, and the results are starting to flow in.

A fourth York player earns a Team of the Week nod after the strongest run of games this side has had so far in 2021. Ferrari was arguably the best player of the whole week in the CPL, taking shifts everywhere from left back to central midfield to either wing position. The Newmarket native scored an excellent goal to get York on the board at Wanderers Grounds, and he helped create Johnston’s later marker as well. It seems Ferrari can do it all — he can finish, he can beat defenders one-on-one, he can deliver a set piece, and he can defend. So far this year, he has taken every assignment thrown at him in stride and he has excelled. Ferrari is very quickly becoming one of York’s most important players, given his versatility and incredible talent.

As CanPL.ca’s Marty Thompson pointed out, Cavalry have scored nine goals in the four games Camargo has started this season. The diminutive talisman has always been a key piece of this club’s identity, and his importance came through in a big way this past week — especially against FC Edmonton on Tuesday. Camargo delivered the ball perfectly for Joe Mason’s opening goal, which was really the first time the Cavs had truly been able to unlock the Eddies’ defence. He finished with five key passes on the night, plus two shots of his own, and both crosses he attempted found their target. Later in the week against Valour, it was Camargo again who found Mo Farsi for the Cavs’ only goal. Camargo’s vision and creativity had really been missing from this Cavalry side, so getting him back now as they’re perhaps rounding into form could be huge for them.

Morelli continues to be the most dangerous player for the Wanderers, whose attack would really be suffering without their Brazilian catalyst. He’s the only player on the team with more than one goal to his name — in fact, he’s scored five of the club’s eight goals so far this year. Morelli was great again over the weekend against York, playing in a number 10 role just behind Stefan Karajovanovic, with his goal coming just a minute after York’s first equalizer to temporarily restore the Wanderers’ lead. So far this season, Morelli has demonstrated his excellent finishing ability and instinct in the box, but even he might describe himself as more of a creator than a target man; on Saturday, Stephen Hart called on his other attackers to help take some of the scoring load off Morelli’s shoulders. “He’s a composed player, a good finisher, but some of the other players need to step up and lighten the load,” Hart said. “We can’t depend on him because then we become a very predictable team.” Still, nothing to complain about with Morelli, who has done all that’s been asked of him and then some this year.

Don’t look now, but Easton Ongaro has scored in four of his last five games — including each of the three Edmonton have played since leaving the bubble in Winnipeg. He and Tobias Warschewski have been a real handful for defenders recently, forcing errors at the back with their relentless pressure. Ongaro has started to regain some of the form he enjoyed near the end of the 2019 season, when he was one of the most imposing attacking forces in the CPL. The two goals he scored this past week showed the full range of his skillset: a thundering header against Cavalry where he completely freed himself from the marker, and a strong run and finish against Pacific which demonstrated his pace, deft feet, and calm finishing ability. If Ongaro can keep up his form along with Warschewski, the Eddies could be in for a strong run up the table.