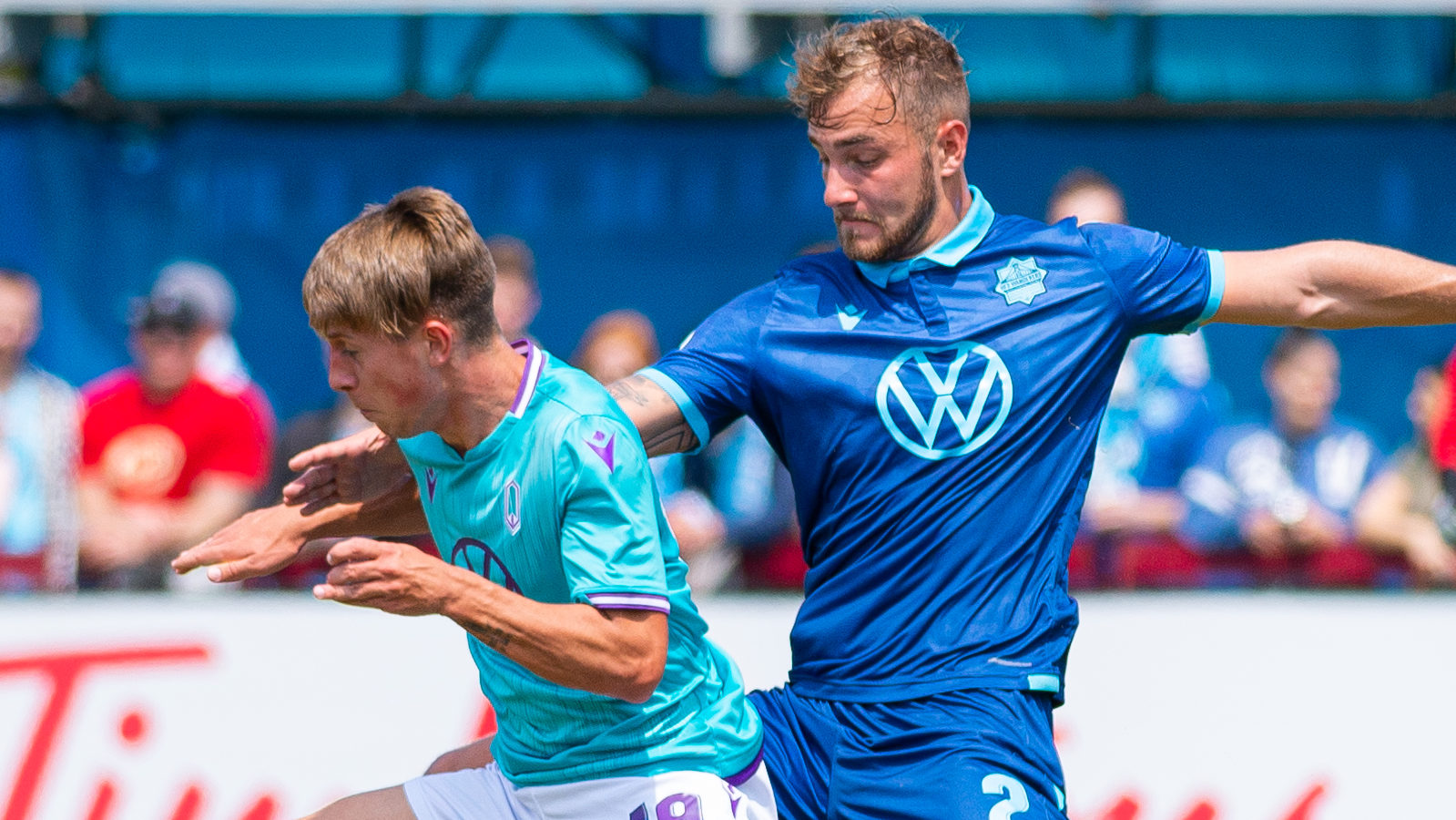 YORK REGION – Throughout these opening months of the Canadian Premier League, many players have announced themselves to soccer fans across the country.

As the Spring season winds to a close on Canada Day, every club has standout performers. For HFX Wanderers FC, one of them is German defender Peter Schaale.

“Since first meeting Peter, I knew right away he would be a main piece of the puzzle here,” said veteran goalkeeper Jan-Michael Williams. “For someone who has not played professionally before this, he’s doing a good job.

“He sees plays and has the ability to make (them) in the crucial time.”

There was one play in particular that Williams was referring to, speaking as he was after the 0-0 draw away to York9 FC. It came in the 60th minute when Ryan Telfer hit a cross into the HFX area from the right. York’s Luca Gasparotto was lurking in the area and shaped himself to touch the service in, but Schaale was on hand to get the needed intervention and preserve the clean sheet, and eventually a point, for his side.

Matthew Arnone, who has lined up alongside Schaale frequently in the middle of the HFX defense, pointed out of his attributes, but also highlighted something more.

“He’s a physical specimen, that’s for sure: fearless in the air, fearless on the ground, confident in his challenges,” said Arnone. “That’s something, that not only as an individual it stands out, but it feeds the entire team when you see your defender win a tackle like that. He gives you confidence.

“He’s vocal, very aware defensively; we work off each other very well, compliment each other. He provides me that fearlessness to play out of the back as well. He deserves the credit he’s been getting, the looks he’s been getting. I hope he can keep it up for the team’s sake.”

Born in Wittlich, Germany, Schaale moved to Cologne, where he played the majority of his soccer, coming up through the academy system of FC Viktoria Koln.

It was a sheer chance that brought him to Canada.

“I finished high school with a friend in Cologne,” explained Schaale. “He had a Canadian agent, who got in touch with my University coach, Deano Morley. (My friend) ended up going to Cape Breton University, spent a year there, told me all about it, and told me they were looking for a defender.

“So he got me in touch with the coach and that’s how I ended up at CBU.”

He never imagined he’d be coming over to play soccer professionally: “Not before I came over no. It was more a step for me to pursue education and play football for a couple more years.

“Then (the CPL) happened, it was lucky for me.”

Pursuing a Bachelor of Business Administration, Schaale has been enjoying his time in Nova Scotia.

“I love the East Coast,” said Schaale. “Really nice people there, the community is very nice.

“I had a great time at university (near Sydney) and now Halifax is a lovely city.”

It was with the CBU Capers that he caught the eye of HFX Coach Stephen Hart, who selected him fifth-overall in the 2018 CPL-U Sports Draft last November.

“Before I even decided to take the job, my family are in Halifax, so I went and saw their games over two years at the university level,” explained Hart. “You could see he had some quality, his entire team has some good quality.

“But he was a standout player that caught your eye.”

The 23-year-old has been on the field for all 810 minutes of the league season and three of HFX’s four Canadian Championship tilts.

Hart has seen the player grow throughout and wants more.

“When he came in, it took him a little time to understand what we want and some of the demands, but he’s grown mentally – he’s always been a physical specimen,” said Hart. “It was a matter of adapting to what we wanted.

“I would like to continue to see him learn to play different positions, but because of the injury bug, he’s been stuck in one. He’s done very well.”

“Stephen knows what he’s doing,” said Schaale. “He brought a couple players in that are pure leaders, like Jan and Elton (John). They lead the team, bring the right mindset to every training session. That’s what the younger players look up to.

“At the same time, he sees something in players like me, coming from USPORTS – Andre Bona, Christian (Oxner); also players from the Open Trials – Kodai (Iida) and Kouame (Outtara). He puts a lot of trust in every player, says, ‘I selected you and that’s all the trust I can give you, so give me something back.'”

The Halifax-based side has hit form in recent weeks, unbeaten in two with a strong 2-0 win over Valour FC on Wednesday night. HFX have lost just twice in their last eight outings (all competitions), both against spring champions Cavalry FC, most recently 2-1 on June 19, where, after a poor first half, they stormed back to give the champs a scare.

With the fall season set to kickoff next weekend and a third-round date with Ottawa Fury FC in the Canadian Championship ahead, Schaale has no doubt that his is a team that can contend.

“100%,” smiled Schaale. “The talent I see in this team, and I think everyone else will agree, what we put out on the pitch, in the training sessions, is amazing.

“There are still a lot of things to work on, no doubt, but the second half against Calgary showed if our heart is on the pitch, we leave it (all) out on the pitch, really fight for each other, we can be one of the strongest teams in the league.”

There is one wrinkle, however, as the defender is due to return to school in the fall.

“I didn’t make my mind up yet,” offered Schaale.

“You’ll hear about that in August.”