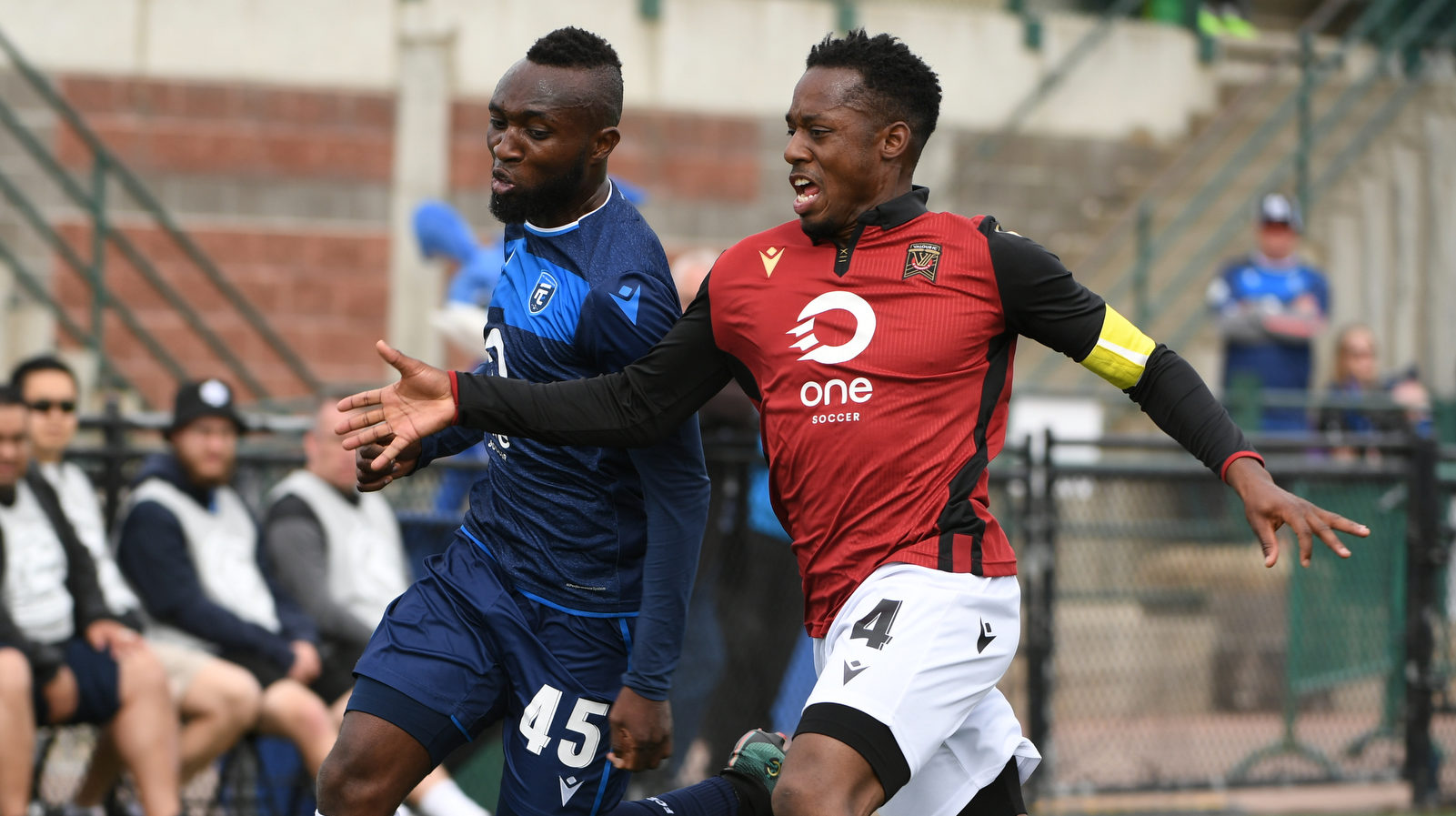 Alphonso Davies was on hand to see some of his old Edmonton buddies perform on the pitch.

But, Michael Petrasso and his Valour FC teammates spoiled the party Sunday morning, beating FC Edmonton 1-0 at Clarke Stadium in a game postponed from Saturday because of poor air quality in the Alberta capital.

Petrasso picked the pocket of Eddies’ fullback Son Yong-chan, then sent a low cross to Ali Musse for the second-half deciding goal. Petrasso was easily the best man on the pitch; running into space and forcing the members of the Eddies’ back line to move their feet. Petrasso also had a great moment late in the first half when he danced between three Eddies defenders before shooting, and only a last-ditch block from Kareem Moses spoiled the scoring chance.

Teenager David Doe, a close friend of Davies, got his first start as an Eddie, and another pal of the Bayern Munich player, Marcus Velado-Tsegaye, created a couple of good scoring chances in the second half, in one instance forcing Valour FC goalkeeper Mathias Janssens to make a sprawling save.

But Petrasso also had the chance to dazzle the celebrity in attendance.

“I played with Alphonso at the last Gold Cup, he was obviously excellent there,” said Petrasso. “Where’s he’s got to is amazing and at that age is incredible. I’m sure he came here to be a fan of FC Edmonton, but I got to see him, I said hi to while I was playing on the field. But, Edmonton beat us in our home opener, so it’s fair we take the result here.”

Davies had a few words for Doe after the game.

“He said you played good, I’m proud of you,” Doe said.

Valour coach Rob Gale said his team worked to keep the ball on the ground and stay away from the strength of all the six-footers in the Eddies’ lineup. Even on corner kicks, Valour was playing the ball short and trying to retain possession rather than pump high balls into box.

“In training, in the last week or so, we’ve worked on creating chances and getting low crosses in,” said Gale. “As the game wore on and it got hot out there, we looked a little bit tired, they were starting to push, to put some attacking threats on. I didn’t know if we’d had enough in the tank to break it down… but fortunately we found a solution today, which we haven’t done in the previous two games.”

For Edmonton, it’s now four games in a row without scoring a goal. And Jeff Paulus is frustrated that the Eddies haven’t been able to make their size advantage pay on set pieces.

“You have to be first to the ball. We had a corner right before the half, and the ball’s been hit near post and James (Marcelin) was there and I thought that deserved a flick-on. And if it’s a flick-on you never know what happens because the keeper’s not prepared for it that close to goal. We’re just not getting a head to these. Players we have here, it’s no secret, the size of them, when you have a big team like that, you need to be a threat on set pieces. Teams need to be scared to foul you near the box, which now gives your dribblers a bit of space… Right now, we’ve not scared anyone on a set piece.”

“It’s out of our thoughts, now,” Paulus said of CONCACAF League. “You can’t drop two in a row like that. We’re out of that competition. We won’t be able to compete for that, now.”