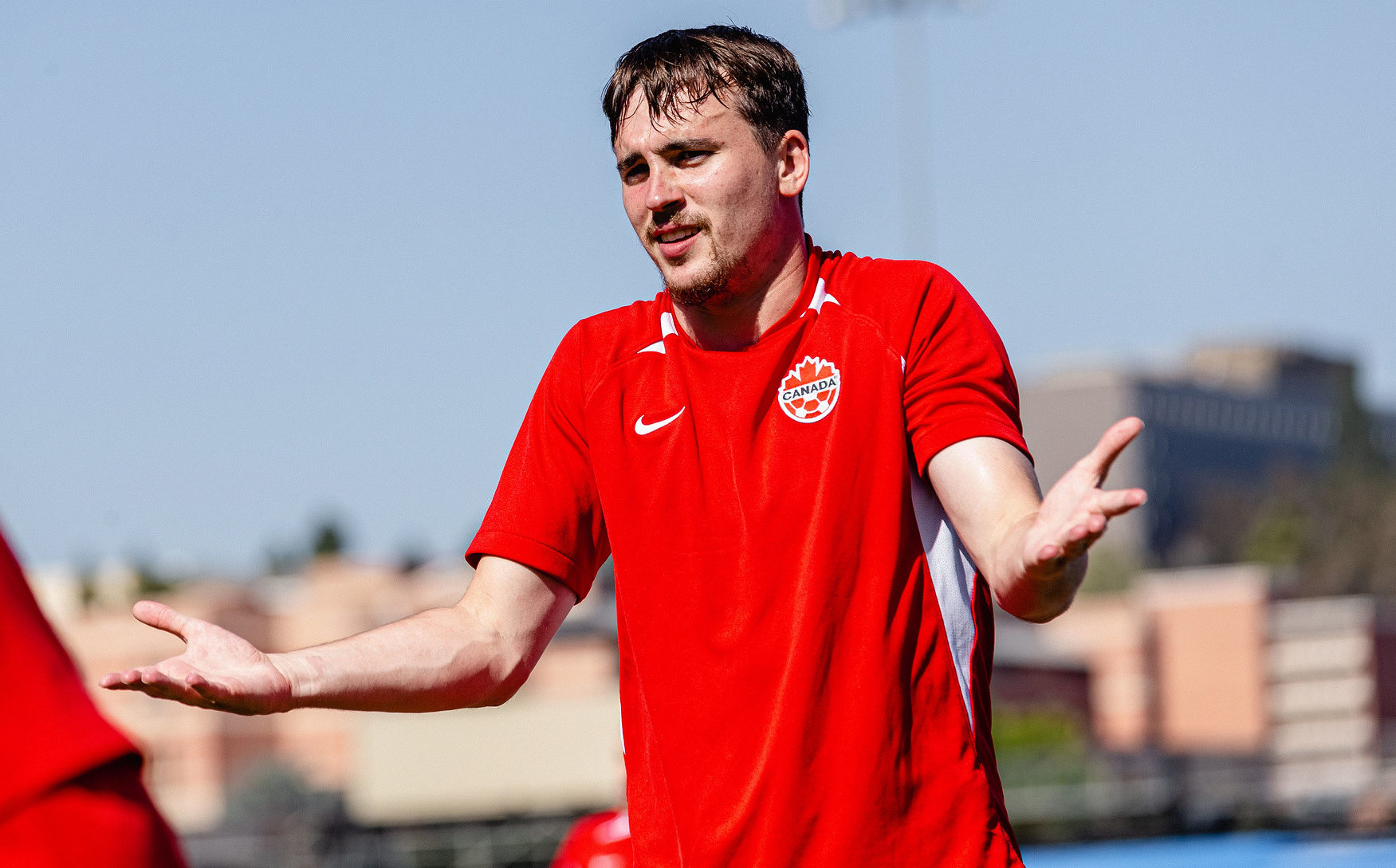 Liam Millar in training with Canada. (Photo: Canada Soccer).
Hear me out, Liam Millar: A CPL loan is your best bet for success in 2020
2020-01-09
by
Armen Bedakian, Supervising Editor
CanMNT News

Liam Millar has been recalled from his second loan at Scottish outfit Kilmarnock FC, returning to Liverpool FC as the club enters crunch time in their historic sprint towards a first Premier League title.

Millar, a 20-year-old native of Toronto, is one of the key pieces in the “young Canada” movement that has taken hold of the men’s national team. Mentioned in the same breath as Alphonso Davies, Jonathan David, and Liam Fraser to some extent, Millar represents the next generational wave of top talent making their way through the club ranks, and taking that success onto the international level. A return to Liverpool may come as a surprise to some, though few would be too shocked if he were to go back out on loan.

That’s all good and well, of course. Likely, even. So, Liam, if you’re reading this, let me make the case for why you should implore Liverpool to let you head home on loan for the 2020 Canadian Premier League season.

Millar’s time in Kilmarnock has been underwhelming at best; the winger-forward played 36 total matches for the Scottish outfit over the course of two consecutive loan spells, recording just two goals in that time. He hasn’t had the same level of contribution to his team as Davies has had for Bayern Munich, and certainly hasn’t been a star figure like free-scoring striker David has been for KAA Gent, either. A third loan to Kilmarnock seems unlikely; we’d argue it would be ill-advised, too.

So, a return to Liverpool now opens the doors of possibility. First, he could try and stay in Jurgen Klopp’s ranks, but would be competing for a role against literally the best wingers on the planet – hardly an ideal circumstance for a young player if they’re looking to break into the mainstream conversation. Another loan to a British or European club could see him succeed a la David at Gent, but toiling in less-than-favourable circumstances is just as likely, and at this age, with this much hype around this current crop of Canadian talent, enduring another “miss” instead of revelling in a “hit” move would be less than ideal, too.

Perhaps a loan to an MLS outfit such as Toronto FC, the Montreal Impact, or the Vancouver Whitecaps could be an option. But, like the 50-50 turnaround of fellow English returnees Michael Petrasso or Doneil Henry before him, there’s no guarantee that those MLS minutes will translate, and I’d argue that trying to compete for a starting spot at Toronto or Montreal wouldn’t exactly be straightforward for the young attacker, anyway.

The Whitecaps would be a smart move, and the prospect of linking up with new star striker Lucas Cavallini is certainly a big part of that appeal. But, if Millar is looking for a breakthrough year, where his name is put up alongside his peers and he throws that name into the conversation for a starting role with Canada, he’ll need to do more than supplement the success of his star compatriot up top, even if he would be playing at a higher level, technically.

That’s where the Canadian Premier League comes in.

Joining the CPL provides Millar with three key advantages over any other possible loan move. With a high likelihood of individual success, Millar would become an instant star across the country, and could be in the conversation for a domestic MVP, Golden Boot, or U-21 Player of the Year nod, like Tristan Borges before him.

He’d also increase his brand and visibility across the nation, taking him from being just a face from the Canada bench to being a player that Canadian soccer fans would actively look out for and support on the national team level. Finally, he’d have the chance to be the big dog and really assert himself, compiling a highlight reel packed to the brim with jaw-dropping moments, the sort that would be significantly tougher to accomplish abroad.

The CPL would provide Millar the platform to go from being just one of the talented youngsters in Canada’s national team pool to being a household name and a star player, domestically. Specifically, a move to Valour FC or HFX Wanderers FC would see him add “saviour” to his potential glittering reputation, as the two bottom clubs of 2019 could really use a player of his calibre. Even a move to league giants Forge or Cavalry, or mid-table contenders Edmonton or York9 or Pacific would afford him the same opportunity to become the guy in Canada.

And, as players such as Borges, Marco Carducci, Amer Didic, and Dominick Zator showed in 2019, John Herdman is still watching; national team opportunities will continue to come his way.

So, Liam, there it is – the great pitch. Come back to Canada, become a star, earn a starting berth with the national team, and head back to Liverpool with a solid season of domestic club action under your belt, just in time to rediscover your finest form and possibly challenge Mohamed Salah for a starting role at Anfield. Or go to Borussia Dortmund and nutmeg Davies for the ‘gram. Both work.