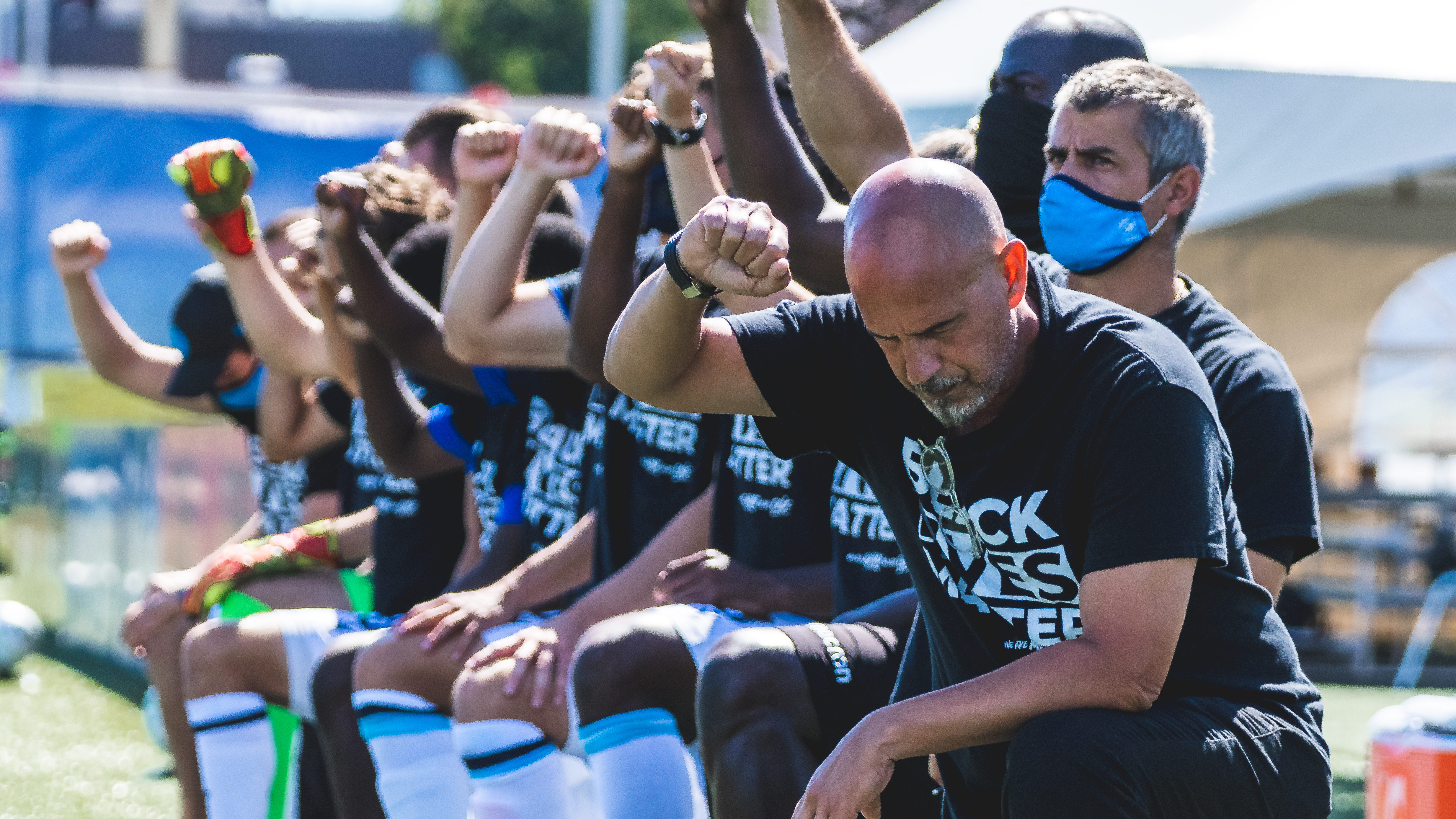 Black History Month runs from Feb. 1-March 1, 2021. To celebrate, CanPL.ca will feature articles throughout the month profiling the Canadian Premier League’s many outstanding players of colour both on and off the field, as well as stories about their views on the importance of Black History Month. We’ll also feature articles such as this one, detailing the important work being done in local communities with regards to racial equality and inclusion.

Marvin Okello and HFX Wanderers FC are laying the framework at just the right time when it comes to talking about racial equality and social justice.

Okello, a Black man born in Kenya to parents who immigrated to Nova Scotia, is the Wanderers’ Diversity and Inclusion Officer, a position that is the first of its kind in the Canadian Premier League.

On Tuesday, the Wanderers launched its “Together For Change” campaign, starting with a dedicated online space for Black Lives Matter, Indigenous, and Pride resources. The club also formally introduced its inclusion committee of nine community leaders and an accompanying podcast hosted by Okello.

“We hope to lay a foundation that leagues, clubs, and teams can pull from – how to bring that unity within the diversity and inclusion umbrella,” Okello told CanPL.ca from his home in Halifax.

Hired in 2019 as HFX’s Member Services Manager, Okello added the Diversity and Inclusion Officer title to his job description last spring after the tragic killing of George Floyd in the United States. The first task in his new role was to bring people together, starting with a series of important Zoom calls with players, coaches, and fans. As protests swept across North America over Floyd’s death, Okello began having those difficult conversations within his club.

“We just acknowledged the elephant in the room that was, you know, the George Floyd incident and everything that had happened since,” Okello explained. “Anytime you go through therapy right the first thing they do is they ask you to acknowledge that there’s a problem. That’s what we did from coach Stephen [Hart] and [goalkeeping coach] Jan-Michael Williams and their experiences in Trinidad to myself growing up in east Africa and coming to Canada at a young age.

Those discussions have evolved into the “Together for Change” podcast hosted by Okello that shines a light on inclusion in the Wanderers community.

Members of the Wanderers roster will come on as podcast guests in the future to talk with Okello, who credits the players for their commitment to this cause.

“Player involvement really goes to show the culture that we’re trying to build. The coaches and owners set up a good culture of the club after that huge turnover from the first year,” Okello said.

“Players like Cory Bent, Omar Kreim and Peter Schaale – they understand it’s more than soccer… this is a two-way street. Mateo Restrepo was a guy that was outspoken in that first BLM call (during The Island Games) about wanting to be part of a team and a community that really embraces our differences and celebrates them.”

Bent, who highlighted Manchester City winger Raheem Sterling as a personal hero for Black History Month, has praised Okello for his work in the community.

“This is the first organization I’ve been in that had anything like this,” Bent, a former Preston North End and Manchester United youth product, told CanPL.ca. “We’re a club that cares about this because we care about people. (Marvin is) really striving to make this club stand out and we’re all proud to work with him and it’s ingrained in the badge.

“It is empowering to be part of something like this but with Marvin to spur ideas it makes things that more effective. He has experience having those difficult conversations. I learned a lot, even just from listening to Marvin and other people who are willing to share their stories about racial abuse from various walks of life.”

The Wanderers are also taking steps to partner with businesses owned by people of colour in Halifax and beyond. Local Black-owned business Smooth Meal Prep has provided player meals for over a year, something Okello is quick to highlight: “That’s a way of providing equity to these businesses, not just, you know, showing solidarity and having social posts – we’re actually providing them with equity.

“Forming those long-term relationships is key, too – not just partnering for a T-shirt line or another one-off.”

Okello believes his committee can help the Wanderers strengthen ties with marginalized communities and build upon those established relationships in the future.

“As a club we’re already ahead of many teams in Canada – but the Wanderers are a really community-focused team so that makes it easier for us to take that charge,” Okello said. “It’s important to lay a foundation that even when teams have turnover of staff or players, even, that it stays. That’s the point of keeping these kinds of things. It’s keeping the club to a certain standard.”

Okello’s podcast, Together From Change, can be found here. Wanderers season ticket holder Missy Searl features in the first episode.

“Something like the podcast, or the committee, is meant to break down barriers and strengthen a culture of inclusion. That’s the goal.”

Huge thanks to @kenyadigit3 from @HFXWanderersFC for visiting our Grade 4 students this week to talk about diversity, inclusion, and privilege. What an honour to have you here! #MySHSH #AfricanHeritageMonth #Anti-racist pic.twitter.com/2zUXvmAsG8