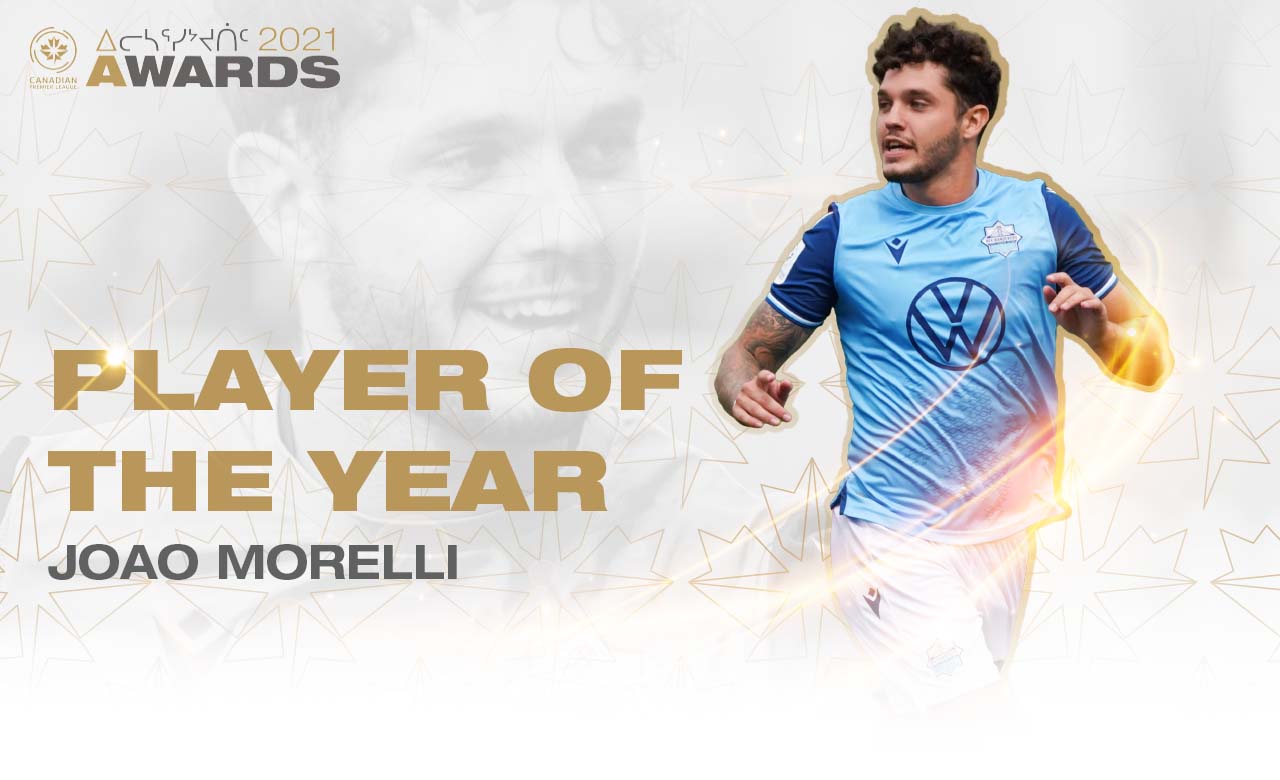 The Canadian Premier League’s top goalscorer is also its top player for the 2021 season.

HFX Wanderers FC attacker João Morelli was named CPL Player of the Year at the 2021 Awards held in Toronto, Ont. on Tuesday.

The 25-year-old Brazilian’s 14-goal regular season – which is a CPL record for most goals scored in a single campaign – was enough to capture both the Golden Boot and Player of the Year as he powered the Wanderers’ attack through the 2021 season.

Morelli, who can play across the attacking four, opened his account at The Kickoff bubble season opener where he notched a brace – one of a staggering six two-goal games on the year – against FC Edmonton on July 10. He added another brace against Atlético Ottawa at Wanderers Grounds in early August and quickly emerged as the league’s top goalscorer. Morelli had Ottawa’s number especially, scoring eight of his 14 goals against them.

The Brazilian added another goal in the Canadian Championship, bringing his yearly total to 15 and making him the club’s all-time goalscoring leader with 19 goals across two seasons.

That goalscoring record was also enough to earn Morelli a two-year contract extension with the Wanderers announced on Monday.

“It’s of course not my main target to be the best player in the league, but when you get recognized you feel like you’ve done your job right and it motivates me to keep going and do more,” Morelli said after signing his extension.

Morelli, who scored four goals for the Wanderers in the shortened 2020 season, joined Halifax after a stint in Estonia’s top tier. The versatile attacker arrived via his native Brazil and English club Middlesbrough, where he joined as a youth player.

“I was really surprised with the quality (in Canada),” Morelli told reporters via Zoom on Tuesday. “There’s a lot of young, talented players with more experience coming from USL, even MLS and Europe. It’s good to be playing in an environment like that, in a league like that. I’m always still growing, a lot of people don’t know it yet, but I felt very, very happy the past two years.

“I had very difficult times in England, in Estonia with making friends, making brothers. In Canada it was really, really easy. That’s one of the reasons I’m coming back (to the Wanderers), because my mental health for me is the most important thing.”

Morelli captured POTY after besting other nominees Terran Campbell of Pacific FC and Forge FC captain Kyle Bekker – the latter of whom won the honour in 2020 – following a poll comprised of media writers and reporters from across Canada. He is the first Wanderers player ever to win the award, joining a group of winners that includes Bekker in 2020 and another Forge player, Tristan Borges, from 2019.