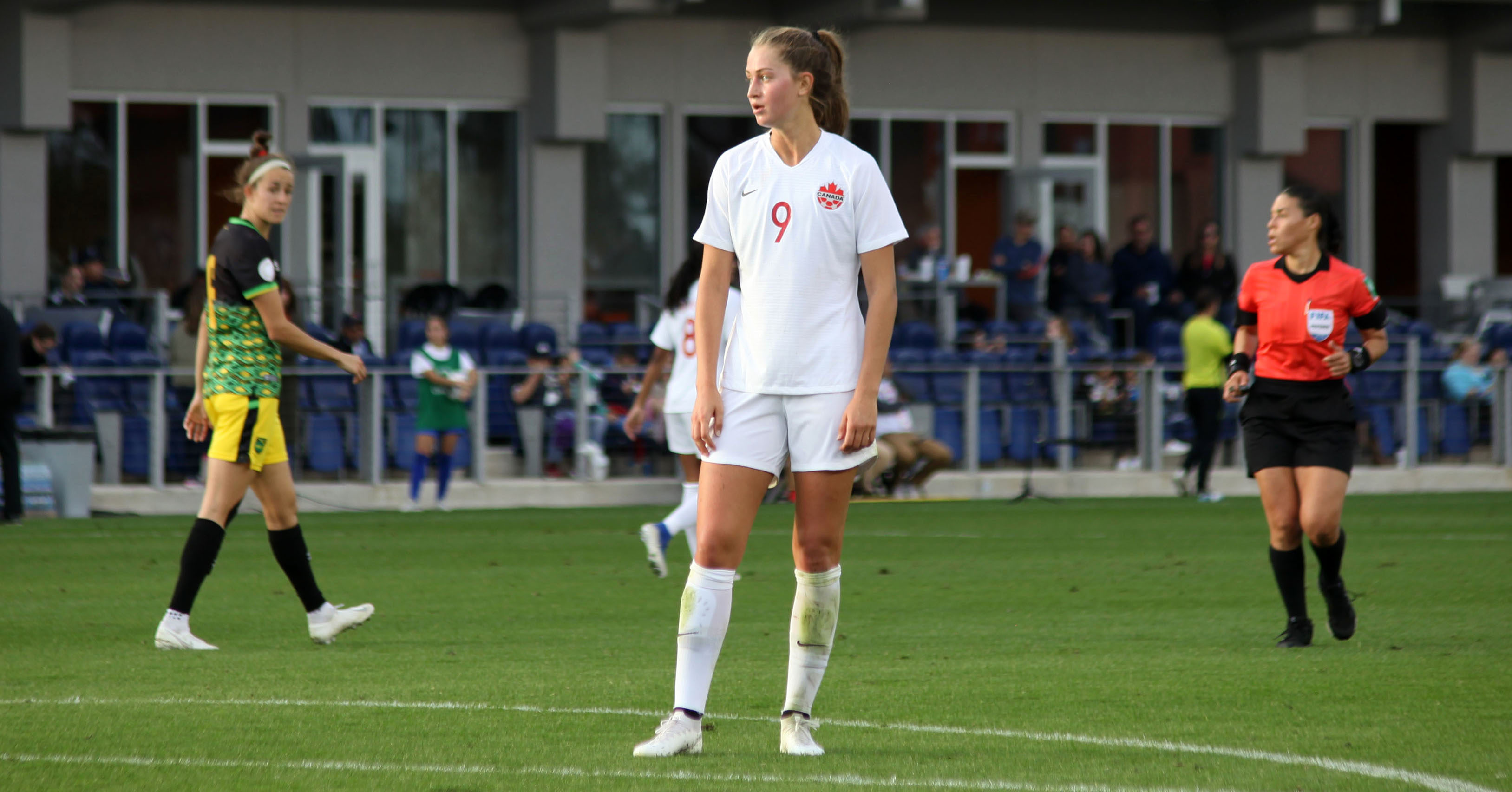 EDINBURG, TEXAS – After enduring a year-long goal drought for her country, Jordyn Huitema has rediscovered her scoring form for the Canadian women’s team.

Huitema made a bit of history at H-E-B Park on Saturday evening when she scored five times in Canada’s 9-0 romp over Jamaica at the Concacaf Olympic qualifying tournament.

In doing so, Huitema became only the second player to bag five goals in a match for Canada. Silvana Burtini, a member of the Canada Soccer Hall of Fame, did it twice – she scored five vs. Mexico in 1994, and then netted a team-record eight vs. Puerto Rico in 1998.

Not even Christine Sinclair, the newly crowned Queen of all international goal-scorers, has ever managed to score five times in a single game for Canada – the iconic Canadian captain has scored four goals in a match on four occasions in her international career, but never five.

“With the amount of skilful players who’ve come before me, it’s honestly shocking that I’m the second player to do it. But I’m very grateful, very humbled,” Huitema offered after the Jamaica game.

Impressively, Huitema has 12 goals in 27 appearances for Canada (10 as a starter) since she debuted for the national team as a 15-year-old in 2017.

But Saturday’s goal-explosion ended a lengthy dry spell for Huitema, an 18-year-old native of Chilliwack, B.C. She didn’t score a single goal in 10 appearances for Canada in 2019, and before this tournament started she was scoreless in 12 previous national team outings, a futility streak that dated back to Oct. 18, 2018 – coincidentally enough, also at H-E-B Park, where she scored four goals vs. Cuba.

Sure, the quality of Saturday’s opposition helped Huitema’s cause. Even though Jamaica qualified for last year’s FIFA World Cup, the Reggae Girlz are not a top-tier team, as evidenced by their spot in the current FIFA world rankings (51st) and by the ease with which the eighth-ranked Canadians tore them apart.

Still, it was a command performance from Huitema, who leads this Concacaf competition in scoring with six goals after two games. In a pair of appearances at this tournament (including coming on as a sub and replacing Sinclair on her record-breaking night), Huitema demonstrated why she’s being touted as Canada’s next big star goal scorer.

That’s heavy praise when you consider the source – Beckie recorded a hat-trick on Saturday to move up to fifth in all-time scoring for the Canadian women’s team, with 30 goals in 64 appearances. But Beckie sees a very bright future ahead for Huitema, who plays professionally in France with Paris Saint-Germain.

“She’s a young player with a lot of talent and a lot of pace and she knows how to finish. She’s obviously tall, so that helps her, but she’s also a great finisher with her head and with her feet; really any part of her body she can score with,” Beckie said.

“That’s a dream as a winger, to have someone like Christine and then someone like (Huitema) in the box. When teams look at us and to look to scout us and they don’t see that Christine Sinclair is our only threat anymore, that’s tough to look at.”

RELATED READING: Memories of Christine Sinclair: In the words of her teammates and coaches

As ruthless in front of goal as Huitema has been in Texas, and as much as she’s one of Canada’s brightest prospects – she’s been unfairly labelled “The Next Sinclair” in some quarters – the teenager has unquestionably benefited from a strong supporting cast during her time with the national team.

Fans in attendance saw first-hand how dangerous she could be while partnering with Beckie and Deanne Rose as a part of an awesome attacking trident against Jamaica. Huitema linked up with Beckie to devastating effect, giving hope to Canadian supporters that their budding partnership could be a dangerous one to watch going forward.

“A great performance by (Jordyn) and the team as well,” Canadian coach Kenneth Heiner-Moller enthused. “Jordyn didn’t just dribble all the way to the goal herself. She was set up very nicely.”

To her credit, Huitema knows that she’s the type of player who thrives on quality service and how she links up with her fellow attackers.

“I feel like between every front player we have a connection. We really devote ourselves on this team to be connected with whoever we’re around. Janine and I obviously have a great connection on the field. We both like to get in behind (the defence), and we like to keep even pace with each other. We like working off of each other, and it’s really easy and really smooth,” Huitema explained

“(Beckie) has incredible pace, (she has the) ability to just break through back lines, and (it’s up to me) to keep up and put the balls into the back of the net when she sets (me up) with perfect crosses.”