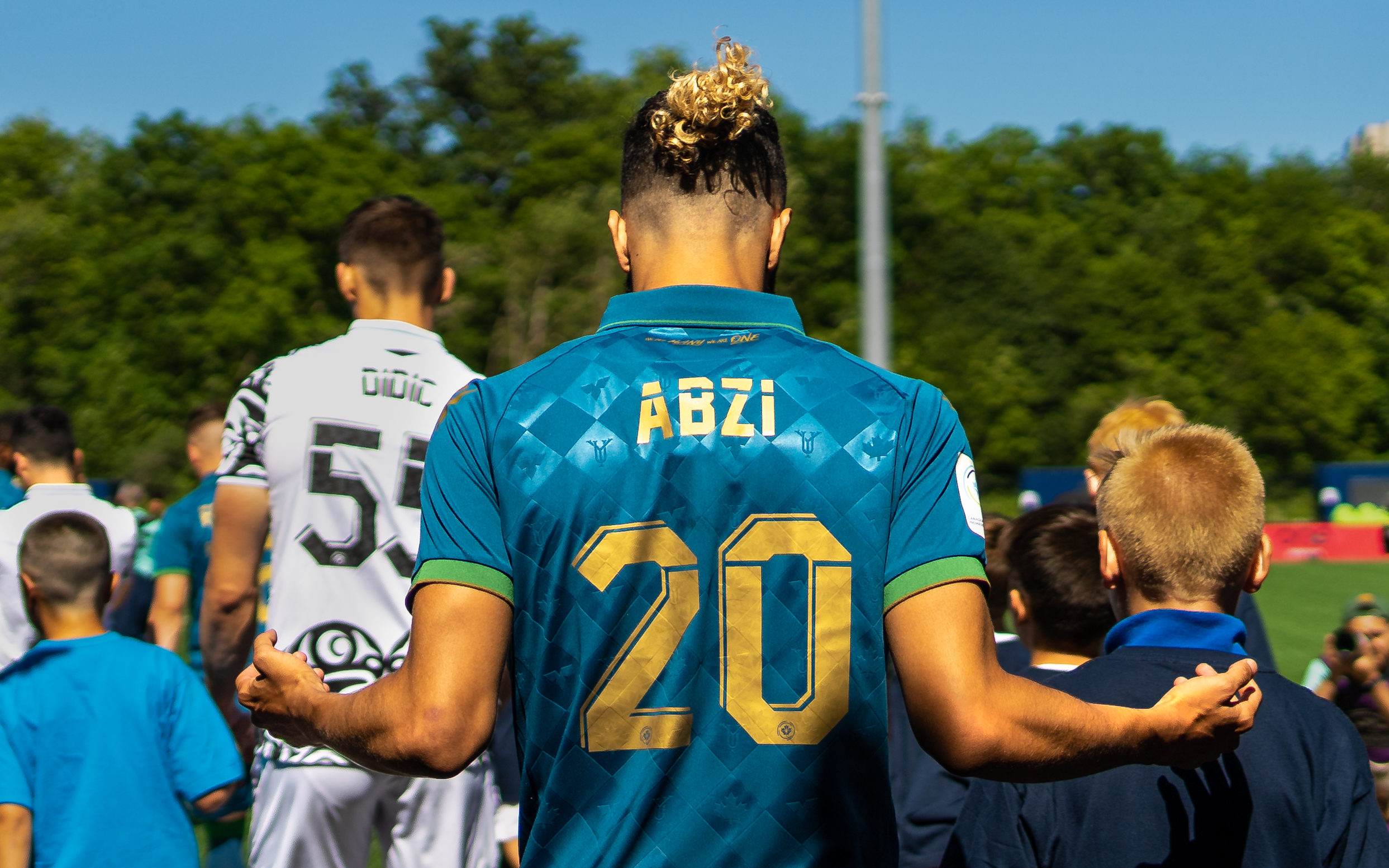 After three and a half remarkable years, the time has come for York United to say au revoir to Diyaeddine Abzi.

With the fullback moving on to Ligue 2 side Pau FC after York’s Canadian Championship semifinal tie on Wednesday, the Nine Stripes will — for the first real time in their history — find themselves without the player who may well be the best they’ve ever had.

This is not a pitiable moment for York, though; rather, it’s a celebratory chapter in the organization’s history, with Abzi’s transfer to France a concrete testament to not only the player’s talent but the work the club has done in developing him. In fact, it’s a core mission of the CPL made manifest: A young player who may otherwise have slipped through the cracks thrived when offered a platform, and the world noticed.

Sitting down with CanPL.ca after his final training session at York Lions Stadium, Abzi took a few moments to reflect on his meteoric rise at York.

“I was waiting for this moment so long,” Abzi said. “From the beginning here I was just thinking about playing good, expressing myself, showing all the people what I can do on the field. Now it’s paying (off), I get the move and I’m happy to get this new challenge.”

The Morocco-born, Montreal-raised left-back was one of the first players to sign for the CPL club — at the time known as York9 FC — back in February 2019. He is, now, one of just two players (alongside Roger Thompson) to have worn York’s colours in each of its four seasons.

Prior to taking his chance in the fledgling league, though, Abzi was miles from the professional game. He’d been playing in the Première ligue de soccer du Québec, the province’s semi-pro division, for AS Blainville, in addition to a brief futsal stint (including a cap with the Canadian national futsal team).

Four years later, though, Abzi is on his way to one of the most competitive second-tier leagues in the world. To him, a large part of the credit is owed to York United and the CPL.

“Without the CPL nothing can happen like that,” he said. “I was playing futsal, playing semi-professional; that’s the highest level I could play here before MLS. Then when the CPL came, it just opened the door for a lot of young talented players here in Canada. It’s something big for Canada, and this is what the league do. It takes people like that, like me, and helps them to show themselves to the biggest clubs in the other football countries.”

One last match with the Nine Stripes for @Abzi__20 @charliejclarke sat down with the @yorkutdfc defender ahead of tonight's #CanChamp Semifinal and prior to heading overseas to join @PauFootballClub 🛫 pic.twitter.com/nmX1VBTFc5

Though Abzi himself will be modest about it, he does also deserve laurels on his own for the pure footballing ability he’s honed over the years in the CPL. Not only has been an electric attacking force — he led the league in successful 1v1s last season and he’s York’s all-time assists leader with nine — but he’s been so on an almost nightly basis, in a league where few players are so consistent.

“I enjoyed all these moments here from the beginning,” Abzi reflected. “From the time Jimmy (Brennan) brought me here, and now with Martin (Nash). I love to have this opportunity to play against MLS sides like Montreal, Toronto; I’d never think about that before when I was playing in semi-pro and stuff, I never expected I can play against a team like that or something. Just a lot of memories here, and I was here from the beginning, so I’m super happy I stayed here and move to Europe from here.”

Abzi’s durability and commitment at York have undoubtedly been contributing factors to his rise; he’s rarely missed a game for the club, aside from a couple yellow card suspensions and a handful of brief injury stints, and as a result he leaves a legacy that will keep him in the local record books for some time. Certainly, it’ll be a while before someone surpasses him as York’s all-time appearances leader — Isaiah Johnston, with 43 appearances, is the current York player closest to the 76 Abzi will finish with.

Chrisnovic N’sa, the other half of York’s top-class fullback partnership the past season and a half, expressed just how much it’s meant to him playing with — and learning from — Abzi.

“I can’t even describe how excited I am for him,” N’sa said. “He’s been working so hard in the league for four years here and he’s deserved to leave since early on. But it’s God’s plan, it’s his time right now, and I’m so happy for him. For me, I’m really lucky to play with him, he teaches me a lot of talent every day. He’s a fantastic footballer, at the top of the league, so I’m just learning his game a bit more, trying to put it in my head.”

For players like N’sa and the rest of the York United squad, Abzi’s departure will present a short-term challenge — of course, it’s always difficult when a top player like him leaves mid-season — but the benefits of such a move will outweigh the drawbacks in the end.

Anybody at York’s training ground will be well aware now that the eyes of the footballing world at large are upon them. If Abzi does well in France, perhaps more clubs of similar level will look to Canada for further talent; we’ve already seen an uptick in recent years of international interest in Canadian players (what club wouldn’t want to unearth the next Alphonso Davies or Jonathan David?), but direct proof of concept that a CPL-developed player can excel in Europe could go a long way.

“It’s a motivation, everybody’s time is coming in their own time,” N’sa agreed. “It’s his time right now, and we keep working. I think all the team saw it and they’re going to put more energy because everybody wants to be next.”

Abzi himself echoed the hope that such a time is coming for some of his teammates: “It’s good news for me but (also) for all the teammates and all the league. I think if they take the risk to take a Canadian player and I do good over there, have a good season and stuff, for sure they’re gonna have more eyes — more saying, ‘Let’s risk for these Canadian guys.’ That’s what we need, something that is a good example and from there we can go forward.”

As for Abzi individually, the sky’s really the limit at this point. If he breaks into the Pau side next season and performs well, who knows where his next step could take him. York United President and GM Angus McNab was sure to point out in the club’s announcement of the move (which includes a significant sell-on fee) that Ligue 2 is heavily scouted by many of Europe’s top clubs; should Abzi catch the attention of a Ligue 1 side in the future, suddenly he could find himself up against the likes of Lionel Messi or Kylian Mbappé twice a year.

That’s all far from mind for Abzi, though. Other CPL standouts have moved to Europe from the league before him; Tristan Borges, Emilio Estevez, and Easton Ongaro all did so, to name a few. None of them have quite managed to find a consistent place in the squad, though. Priority number one for Abzi this summer will be making an impression in preseason and carving out a consistent place in the Pau squad.

Above all, he’ll be reminding himself not to take such an opportunity for granted.

“Everybody knows Ligue 2 is one of the best second divisions in Europe,” he said. “I’m just excited to be there, I’m not thinking about how I’m going to to do over there or something, I’m just thinking about going there, doing the same stuff I’m doing here and enjoying the moment, this experience.”

Abzi’s teammates at York will certainly be keeping close tabs on his progress in France, cheering along with each goal and assist. Before then, though, they have one final battle to face alongside him: Wednesday’s Canadian Championship semifinal in Vancouver.

The objective this week is to send Abzi out on a high note — ideally, with one last scintillating performance along the BC Place touchline.

After that? It’s bon voyage to the young star, who will join an ever-growing group of compatriots in flying Canada’s flag in one of the world’s great footballing nations.

Abzi departs with plenty of fond words for the teammates, staff, and fans he met along the way at York United. As he turned his thoughts to the future, though, he cracked a wide grin and offered a message to the people of Pau. Pointing to the camera, he said in his native French: