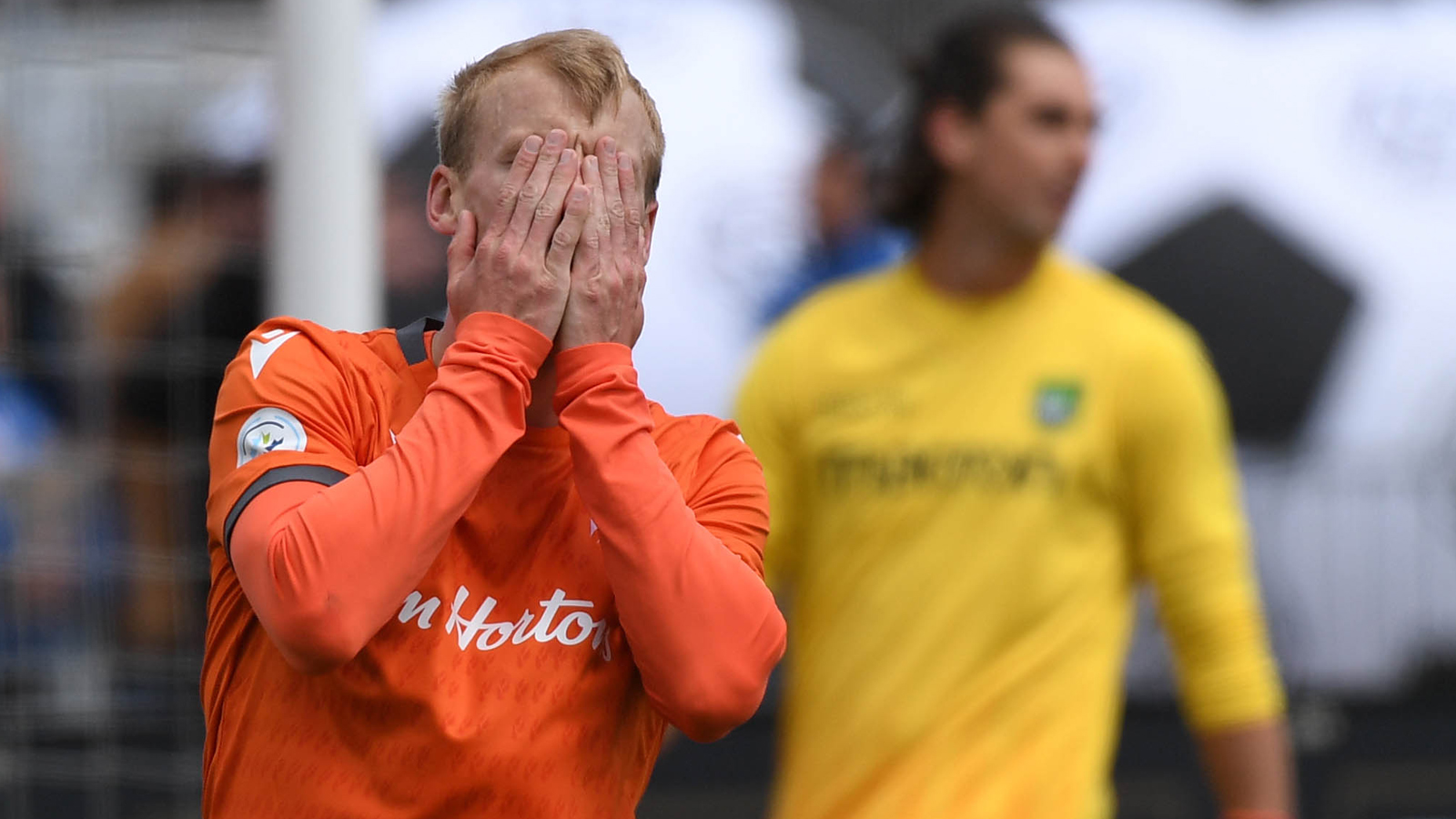 Kyle Bekker reacts to a missed opportunity against York9 FC. (Photo: CPL).
‘It is what it is’: Bekker moves past inaugural match drama ahead of 905 Derby
2019-05-24
News

HAMILTON – If you didn’t think there was much of a rivalry brewing in the 905, think again.

The two Ontario-based Canadian Premier League teams, York9 FC and Forge FC, are at different heights on the Spring table of the 2019 CPL season, but that doesn’t mean that Saturday’s league home opener for the Nine Stripes won’t be any more exciting than their first encounter.

That inaugural match at Tim Hortons Field featured three yellow cards and one red card, which was drawn after Manuel Aparicio picked up those two warning cards for York9.

However, it was an incident that wasn’t called a foul that was talked about the most.

Kyle Bekker’s elbow was raised a little too high for Canada Soccer’s liking when Bekker tried to get Joseph Di Chiara off of the ball. That challenge resulted in Bekker missing two additional matches, after being handed a retroactive suspension.

When asked if Bekker had reached out to Di Chiara prior to this weekends game, the Forge captain offered a definitive “nope,” adding, with a chuckle: “It’s soccer. It is what it is, I guess.”

It’s no wonder this rematch of the 905 derby is expected to be an aggressive contest. Bekker, at the very least, is expecting a tough test at York Lions Stadium on Saturday,

“Obviously with their pitch it’s a bit of a tighter field for us to play on, with that being said and that size of a field it’ll just be the nature of the way that game is going to go,” Bekker said. “Both teams will be playing in a little bit of higher spot so it might be a bit physical at times.

“That won’t affect the way we will play though. It’s the same mentality for us, we play our game and try and grab 3 points on the road.”

York9 FC has yet to win a game in league play and sit at the bottom of the table with just two points. That said, Jimmy Brennan’s Y9 squad has only played three matches compared to Forge’s five.

It’s why a victory means different things for each team: York9 need a win to just stay in the thick of the spring race; Forge, on the other hand, need a win to catch up to Cavalry FC, who are running away with the Spring berth with a perfect 4-0-0 record and 12 points in the table, 5 more than the 2nd-placed outfit from Hamilton.

“I think each team can lose or win against each team in the league, which is a nice thing,” Reynders said. “It’s nice for the fans, and each game will be tough, so you have to be at a good level for each game.”

With the focus on Cavalry out of the picture until June 22nd, Reynders has his team prepared for their Saturday rematch against their 905 Derby rival. In that first tilt, Forge not only dominated offensively – tallying 14 more total shots in that first game against York9 FC – but have since gone on to prove themselves as the top attacking team in the league. Forge have eight goals on the season, a league high, alongside 33 shots on goal, also a league high.

Bekker figures scoring will be a key factor in this second encounter, but also pointed to the decreased pressure, too.

“Obviously there was a lot going into that first game, you know the excitement in being the inaugural game of course,” Bekker said. “Now that that type of pressure is out of the way, we can focus on just getting a win.”