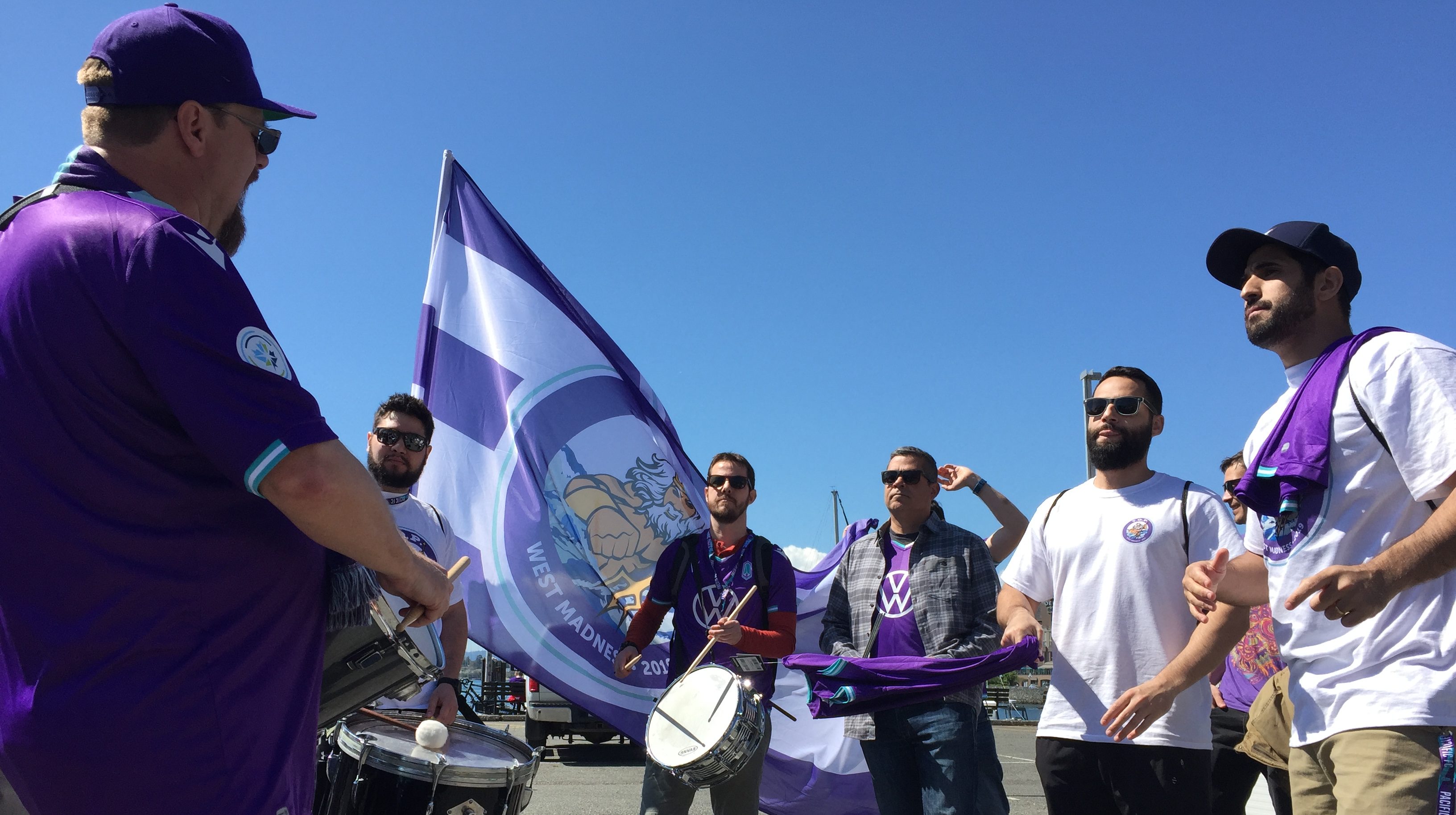 The chants carried across Victoria’s Inner Harbour, down the steps from the pedestrian-filled Bastion Square:

On the Saturday of Easter Weekend, Pacific FC supporters were purple-clad and full-throated in preparation for their home opener against HFX Wanderers FC on April 28th. Now, as mere days remain until the Canadian Premier League’s opening weekend, the league’s longest-running supporters’ group is ready for its moment in the spotlight.

Though their newest team has yet to play its first professional match, the Lake Side Buoys have been a fixture of Greater Victoria’s soccer scene for the past ten years. Boisterous and kilt-clad, the supporters’ group began in 2009 with the arrival of Victoria Highlanders FC in the USL’s Premier Development League.

Playing out of the former Bear Mountain Stadium in Langford — since redeveloped as Westhills Stadium — the Highlanders were Victoria’s second taste of high-level soccer, after the short-lived Victoria Vistas of the former Canadian Soccer League. It was there that the Lake Side Buoys’ story began.

“At the old Westhills, there used to be a little pond,” Mike Schlodder, one of the Lake Side Buoys’ founding members, told CanPL.ca. “And we called it the Lake.”

“There were aluminum bleachers behind the nets, and we were standing, singing, and chanting. We just got right into it from the get-go,” added Ted Godwin, vice president of the Lake Side Buoys. “We wore kilts, we brought bagpipes. We thought it’d be hilarious.”

The neighbouring Vancouver Whitecaps had the Southsiders as their supporters. Godwin and friends thought, “Well, we’re Lake Side.”

The group added the Buoys moniker as a tongue-in-cheek nod to Celtic FC supporters, who called themselves Bhoys.

“Our specialty, our favourite, was always harassing goalkeepers,” Godwin told CanPL.ca. “As the [first] season went on, what became really cool for us was at the end of the match, the keepers would turn around, smile at us, and give us a clap. Because they enjoyed us interacting with them.”

The group varied in number — in fact, organizers never kept an organized tally of official members or collected dues until this year — but never lacked persistence. Ever since Pacific FC was announced as the seventh CPL team, interest has ballooned.

“Now everybody in town wants to come and join us,” Lake Side Buoys president Jason Armond told CanPL.ca. “And I’m really excited to see where we go from here.”

Along with the Lake Side Buoys, Pacific FC found its second supporters’ group in T.O.P., short for Torcida Organizada Pacific, formed after a group of Vancouver Islanders originally from Brazil decided to pledge their support.

“We’re going to be in the stadium two hours before, three hours before,” added T.O.P member Carlos Quijano. “Chanting and singing and jumping.”

For long-time members of the Lake Side Buoys, the widespread enthusiasm surrounding Pacific FC is a welcome sight — and perhaps an unfamiliar one.

“I never thought I would see two supporters’ groups in Victoria supporting one team,” Schlodder said.

“We’ve wanted this [team] for a good ten years,” added Allison Armond, secretary and treasurer for the Lake Side Buoys.

In anticipation of the home opener at Westhills Stadium — slated for 4:00 p.m. PT on the 28th — the Lake Side Buoys have hinted at a tifo they’ll unveil at the match. Members remain tight-lipped about the details, however.

“We can’t tell what it is; we’re not allowed to,” Schlodder said. “We want it to be a surprise.”

“Hopefully, we won’t violate any fire codes,” Jason Armond quipped. “And you might be able to see it from space.”

The match will mark the second-ever in CPL history, after Saturday’s nationally-televised tilt between Forge FC and York9 FC on CBC (1 p.m. ET). For their part, the Lake Side Buoys and T.O.P. are promising lots of noise.

“We can chant in like two feet of mud, I don’t care,” Lake Side Buoys member Dallas Killian Arrowood told CanPL.ca.

“We’re going to have a great big march into the stadium every game and show the crowd, this is what it looks like to actually support the team and not just sit and watch,” added husband Ryan Arrowood, head of game day experience for the Lake Side Buoys.

What should the rest of the Canadian Premier League expect in Langford? T.O.P.’s Gabriel Fioravanti summed it up thusly:

“Be ready for West Madness.”